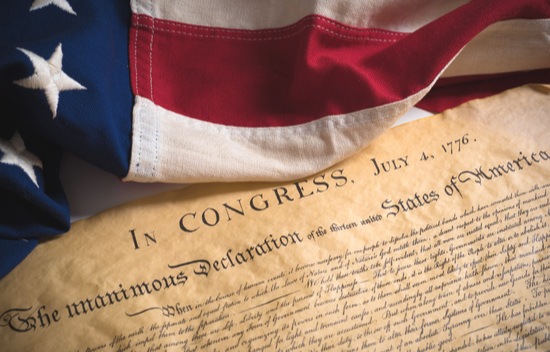 Background Essay: An “Apple of Gold” in a “Picture of Silver”: The Declaration of Independence and the U.S. Constitution

Guiding Questions: What is the relationship between the Declaration of Independence and the Constitution? How do these Founding documents reflect common republican principles?

In 1861, President Abraham Lincoln had occasion to reflect on the principles of the American Founding. Using a biblical metaphor, he stated that the Declaration of Independence was an “apple of gold” because it contained the Founding principles of the new country. The Constitution was a “picture of silver,” or a frame around the apple that created the structures of republican government. In Lincoln’s mind—and in those of the Founders—the two documents were permanently linked in creating a free government.

Popular Sovereignty: “We the People”

The Declaration of Independence affirmed the republican principle of popular government. The people were the source of all sovereignty, or authority, in the representative government. They gave their consent to their elected representatives to govern them. The document stated, “That to secure these rights, Governments are instituted among Men, deriving [receiving] their just powers from the consent of the governed.”

The Preamble to the Constitution outlined that the new constitutional government was also to be based on this principle of popular sovereignty. It stated, “We the People of the United States, in Order to form a more perfect Union.” This meant that the people of the United States, through their representatives, established this new government. The previous government under the Articles of Confederation (1781–1789) did not have sufficient power to govern the nation because the states were sovereign.

The core purpose of the Declaration of Independence was to establish a just political order that recognized human equality in natural rights for all persons. “We hold these truths to be self-evident, that all men are created equal, that they are endowed by their Creator with certain unalienable [impossible to take away] Rights.” This meant that the equality of all people would be the basis of any American system of government. This promise, though not fully realized, has guided American political debates ever since.

This was recognized in the Preamble, which stated simply that one of its main goals was to “establish Justice.” Justice meant that all were equal under the law and equal in their rights. Individuals would be able to pursue their own happiness and have equal opportunity to work hard and keep the fruits of their labor. James Madison noted the importance of justice in Federalist No. 51 when he wrote, “Justice is the end [purpose] of government. It is the end of civil society.”

The Declaration supported the rule of law based upon popular consent. Living under the rule of law means that government and citizens all abide by the same laws regardless of political power. Those laws must be stable and justly applied. The people formed a government that abided by the rule of law and so protected people’s rights. The people had the power to overthrow a tyrannical government but also had a responsibility to “institute new Government, laying its foundation on such principles and organizing its powers in such form, as to them shall seem most likely to effect their Safety and Happiness.” The rule of law allowed citizens to live their lives peacefully and civil society to function normally.

Likewise, the Preamble stated that the new government would “insure domestic Tranquility.” After suffering the upheavals of Shays’ Rebellion (1786–1787) and other problems created by the weak government under the Articles of Confederation, the Framers granted the national executive greater powers to enforce the constitutional laws that Congress made according to majority rule. This strengthened the rule of law.

The Declaration announced independence from Great Britain and created a new nation. That nation claimed the powers to declare and fight a war, to make peace treaties, to establish alliances with other nations, and to trade with other countries. The Continental Congress outlined these powers in a governing document called the Articles of Confederation. The Articles formed the first national government of the United States, and it was under the authority of this national government that the United States fought and won the Revolutionary War and signed the 1783 peace treaty with Great Britain. However, the structure of the government under the Articles proved to be too weak, particularly when it came to providing for the common defense. Partly because of these concerns, delegates met in Philadelphia in 1787 to draft a new Constitution. That new Constitution strengthened the national government and its powers to provide for the common defense. The new government was tasked with protecting the country and its citizens against foreign invasion or domestic insurrection. The military was under civilian control and would protect Americans’ rights and liberties as well as the popular government they created against all enemies, foreign and domestic.

The Declaration promoted the general welfare by asserting the universal principle that all were equally entitled to inalienable rights—those rights that belonged to them as human beings. It also established the principle of a free government to protect those rights. Americans declared independence as a path to end tyranny and embrace those free principles for both the good of the individual and the common good.

Liberty: “Secure the Blessings of Liberty”

The Declaration claimed that the natural rights to “Life, Liberty and the pursuit of Happiness” were self-evident. Political, economic, and religious liberty were among the fundamental and inalienable rights of the individual. A republican government would be instituted to protect liberty, and its powers would be limited to achieve that goal.

The weakness of the Articles of Confederation actually endangered liberty by allowing unjust laws and by not giving the national government enough power to govern properly in order to preserve liberty. The more robust government under the Constitution was intended to do a better job of preserving liberty by having greater authority to pass and enforce laws that would promote and protect citizens’ liberty. Though it had greater power, the government was limited to specific ends, or tasks, to ensure that it did not become too powerful.

In Federalist No. 1, Alexander Hamilton explained the entire purpose of establishing free government based upon the principles of the Declaration of Independence and the Constitution. He stated that Americans had the opportunity and responsibility to form good government through “reflection and choice,” not by “accident and force.” The ability to choose reflected the ideals of government by consent argued for in the Declaration. Together, these documents demonstrate that the United States was founded uniquely upon a set of principles and ideals.

The principles of the Declaration of Independence informed the creation of the new government under the Constitution. Together, the Founding principles contained in the documents worked together to guide the governance of the nation to secure the blessings of liberty. Although these ideals shaped the structure of the government, it was ultimately up to the people to maintain them. The Founders believed that republican self-government was ultimately dependent upon the civic virtue of the people. As Lincoln wrote in his “apple of gold” reflection, “So let us act, that neither picture, or apple shall ever be blurred, or bruised or broken.” 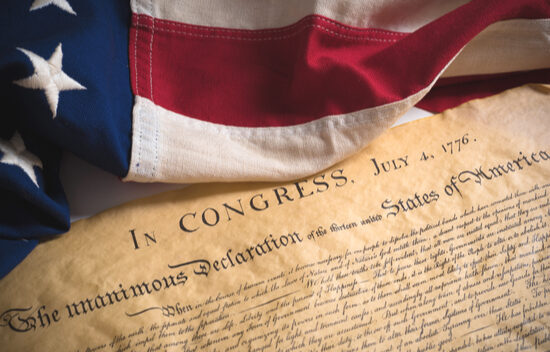 Background Essay: An “Apple of Gold” in a “Picture of Silver”: The Declaration of Independence and the U.S. Constitution 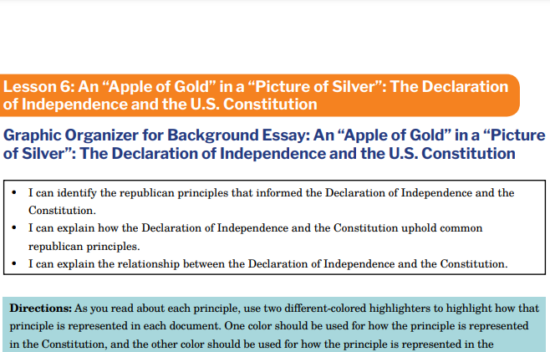 Graphic Organizer for Background Essay: An “Apple of Gold” in a “Picture of Silver”: The Declaration of Independence and the U.S. Constitution 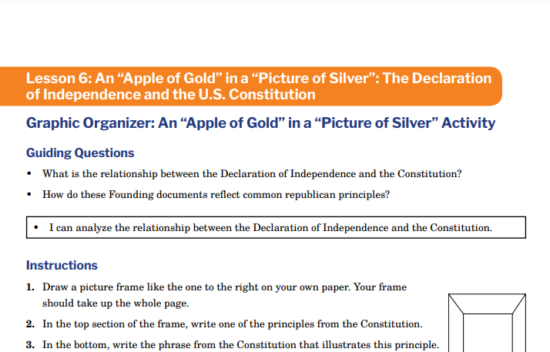 Graphic Organizer: An “Apple of Gold” in a “Picture of Silver” Activity 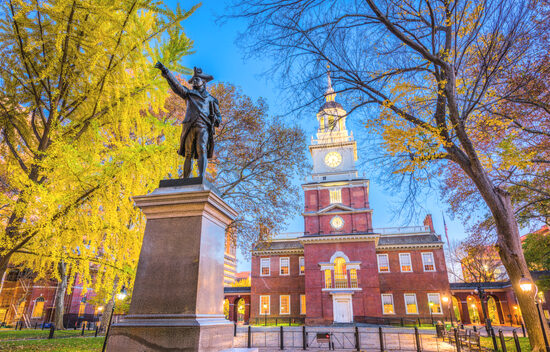 An “Apple of Gold” in a “Picture of Silver”: The Declaration of Independence and the U.S. Constitution

What is the relationship between the Declaration of Independence and the Constitution? How do these Founding documents reflect common republican principles? 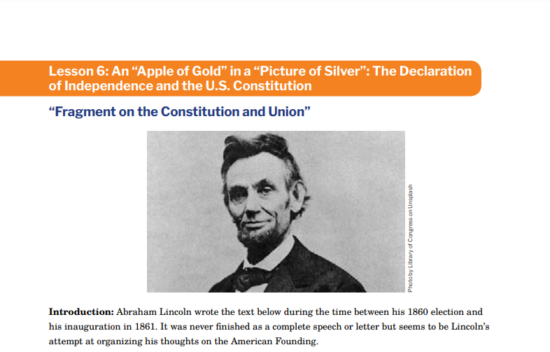 “Fragment on the Constitution and Union” 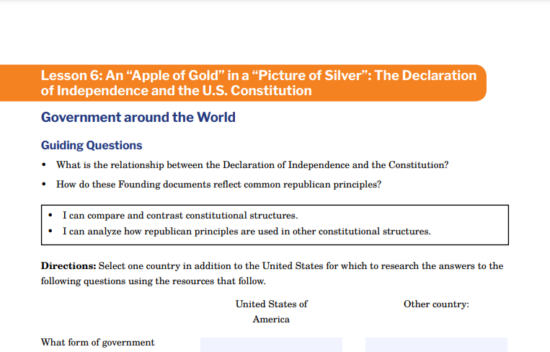 Government around the World