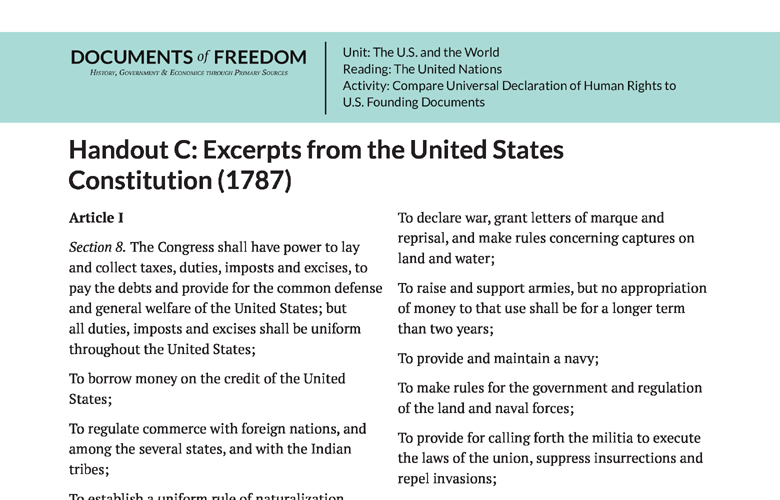 To borrow money on the credit of the United States;

To regulate commerce with foreign nations, and among the several states, and with the Indian tribes;

To establish a uniform rule of naturalization, and uniform laws on the subject of bankruptcies throughout the United States;

To coin money, regulate the value thereof, and of foreign coin, and fix the standard of weights and measures;

To provide for the punishment of counterfeiting the securities and current coin of the United States;

To promote the progress of science and useful arts, by securing for limited times to authors and inventors the exclusive right to their respective writings and discoveries;

To constitute tribunals inferior to the Supreme Court;

To define and punish piracies and felonies committed on the high seas, and offenses against the law of nations;

To declare war, grant letters of marque and reprisal, and make rules concerning captures on land and water;

To raise and support armies, but no appropriation of money to that use shall be for a longer term than two years;

To provide and maintain a navy;

To make rules for the government and regulation of the land and naval forces;

To provide for calling forth the militia to execute the laws of the union, suppress insurrections and repel invasions;

To provide for organizing, arming, and disciplining, the militia, and for governing such part of them as may be employed in the service of the United States, reserving to the states respectively, the appointment of the officers, and the authority of training the militia according to the discipline prescribed by Congress;

To exercise exclusive legislation in all cases whatsoever, over such District (not exceeding ten miles square) as may, by cession of particular states, and the acceptance of Congress, become the seat of the government of the United States, and to exercise like authority over all places purchased by the consent of the legislature of the state in which the same shall be, for the erection of forts, magazines, arsenals, dockyards, and other needful buildings;–And

To make all laws which shall be necessary and proper for carrying into execution the foregoing powers, and all other powers vested by this Constitution in the government of the United States, or in any department or officer thereof.

Section 9. The migration or importation of such persons as any of the states now existing shall think proper to admit, shall not be prohibited by the Congress prior to the year one thousand eight hundred and eight, but a tax or duty may be imposed on such importation, not exceeding ten dollars for each person.

The privilege of the writ of habeas corpus shall not be suspended, unless when in cases of rebellion or invasion the public safety may require it.

No bill of attainder or ex post facto Law shall be passed.

No capitation, or other direct, tax shall be laid, unless in proportion to the census or enumeration herein before directed to be taken.

No tax or duty shall be laid on articles exported from any state.

No preference shall be given by any regulation of commerce or revenue to the ports of one state over those of another: nor shall vessels bound to, or from, one state, be obliged to enter, clear or pay duties in another.

No money shall be drawn from the treasury, but in consequence of appropriations made by law; and a regular statement and account of receipts and expenditures of all public money shall be published from time to time.

No title of nobility shall be granted by the United States: and no person holding any office of profit or trust under them, shall, without the consent of the Congress, accept of any present, emolument, office, or title, of any kind whatever, from any king, prince, or foreign state.

Section 10. No state shall enter into any treaty, alliance, or confederation; grant letters of marque and reprisal; coin money; emit bills of credit; make anything but gold and silver coin a tender in payment of debts; pass any bill of attainder, ex post facto law, or law impairing the obligation of contracts, or grant any title of nobility.

No state shall, without the consent of the Congress, lay any imposts or duties on imports or exports, except what may be absolutely necessary for executing its inspection laws: and the net produce of all duties and imposts, laid by any state on imports or exports, shall be for the use of the treasury of the United States; and all such laws shall be subject to the revision and control of the Congress.

No state shall, without the consent of Congress, lay any duty of tonnage, keep troops, or ships of war in time of peace, enter into any agreement or compact with another state, or with a foreign power, or engage in war, unless actually invaded, or in such imminent danger as will not admit of delay…

Section 1. The judicial power of the United States, shall be vested in one Supreme Court, and in such inferior courts as the Congress may from time to time ordain and establish. The judges, both of the supreme and inferior courts, shall hold their offices during good behaviour, and shall, at stated times, receive for their services, a compensation, which shall not be diminished during their continuance in office.

Section 2. The judicial power shall extend to all cases, in law and equity, arising under this Constitution, the laws of the United States, and treaties made, or which shall be made, under their authority;–to all cases affecting ambassadors, other public ministers and consuls;–to all cases of admiralty and maritime jurisdiction;–to controversies to which the United States shall be a party;–to controversies between two or more states;–between a state and citizens of another state;– between citizens of different states;– between citizens of the same state claiming lands under grants of different states, and between a state, or the citizens thereof, and foreign states, citizens or subjects.

The trial of all crimes, except in cases of impeachment, shall be by jury; and such trial shall be held in the state where the said crimes shall have been committed; but when not committed within any state, the trial shall be at such place or places as the Congress may by law have directed.

Section 3. Treason against the United States, shall consist only in levying war against them, or in adhering to their enemies, giving them aid and comfort. No person shall be convicted of treason unless on the testimony of two witnesses to the same overt act, or on confession in open court.

The Congress shall have power to declare the punishment of treason, but no attainder of treason shall work corruption of blood, or forfeiture except during the life of the person attainted.