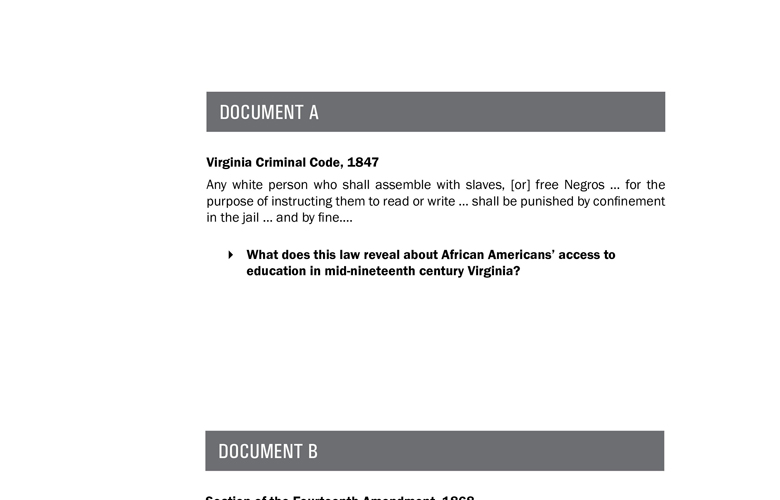 Any white person who shall assemble with slaves, [or] free Negros … for the purpose of instructing them to read or write … shall be punished by confinement in the jail … and by fine.…

The object of the [Fourteenth] amendment was undoubtedly to enforce the absolute equality of the two races before the law, but in the nature of things it could not have been intended to abolish distinctions based upon color, or to enforce social, as distinguished from political, equality, or a co-mingling of the two races upon terms unsatisfactory to either.…

Laws permitting, and even requiring, the separation [of races] in places where they are liable to be brought into contact do not necessarily imply the inferiority of either race to the other, and have been generally, if not universally, recognized as within the competency of the state legislatures in the exercise of their police power….

[I]n the eye of the law, there is in this country no superior, dominant, ruling class of citizens. There is no caste here. Our constitution is color-blind, and neither knows nor tolerates classes among citizens. In respect of civil rights, all citizens are equal before the law….The destinies of the two races, in this country, are indissolubly linked together, and the interests of both require that the common government of all shall not permit the seeds of race hate to be planted under the sanction of law. 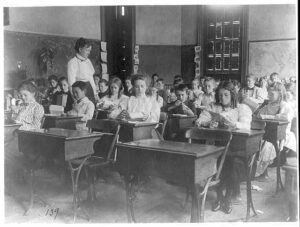 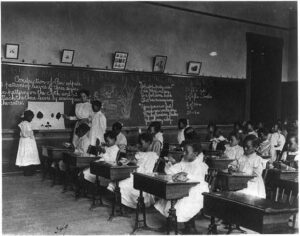 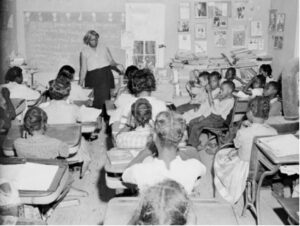 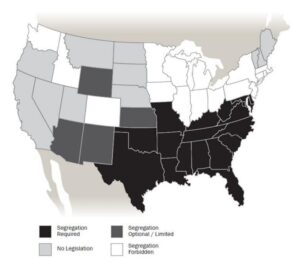 In approaching this problem, we cannot turn the clock back to 1868 when the [Fourteenth] Amendment was adopted, or even to 1896 when Plessy v. Ferguson was written. We must consider public education in the light of its full development and its present place in American life throughout the Nation. Only in this way can it be determined if segregation in public schools deprives these plaintiffs of the equal protection of the laws.

Today, education is perhaps the most important function of state and local governments. …In these days, it is doubtful that any child may reasonably be expected to succeed in life if he is denied the opportunity of an education. Such an opportunity, where the state has undertaken to provide it, is a right which must be made available to all on equal terms….

To separate [students] from others of similar age and qualifications solely because of their race generates a feeling of inferiority as to their status in the community that may affect their hearts and minds in a way unlikely to ever be undone. …Whatever may have been the extent of psychological knowledge at the time of Plessy v. Ferguson, this finding is amply supported by modern authority.…

We conclude that in the field of public education the doctrine of “separate but equal” has no place. Separate educational facilities are inherently unequal. Therefore, we hold that the plaintiffs and others similarly situated … are, by reason of the segregation complained of, deprived of the equal protection of the laws guaranteed by the Fourteenth Amendment.

Note: After the 1954 decision in Brown v. Board of Education declared state-mandated segregation in public schools unconstitutional, the case was reargued to determine how to correct the violations.

[T]he cases are remanded to the District Courts to take such proceedings and enter such orders and decrees consistent with this opinion as are necessary and proper to admit to public schools on a racially nondiscriminatory basis with all deliberate speed the parties to these cases. 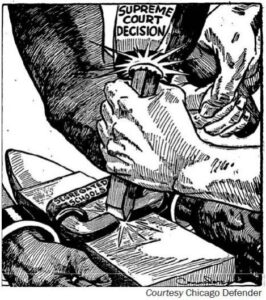 DIRECTIONS: Answer the Key Question in a well-organized essay that incorporates your interpretations of Documents A-J, as well as your own knowledge of history

KEY QUESTION: Assess the role played by the Court as the protector of individual rights against the tyranny of the majority in Brown v. Board of Education.