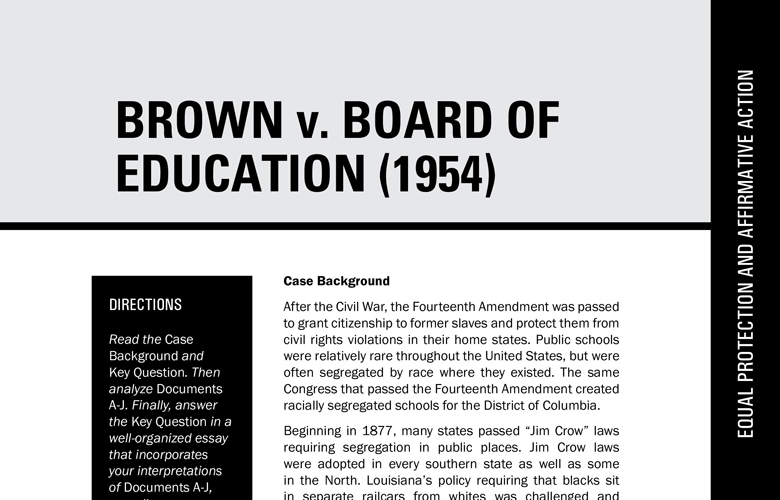 Read the Case Background and Key Question. Then analyze Documents A-J. Finally, answer the Key Question in a well-organized essay that incorporates your interpretations of Documents A-J, as well as your own knowledge of history.

Beginning in 1877, many states passed “Jim Crow” laws requiring segregation in public places. Jim  Crow laws were adopted in every southern state as well as some in the North. Louisiana’s policy requiring that blacks sit in separate railcars from whites was challenged and upheld in the Supreme Court case Plessy v. Ferguson (1896). The Court held that there was nothing inherently unequal—nor anything unconstitutional—about separate accommodations for races.

In the twentieth century, the National Association for the Advancement of Colored People (NAACP) began a litigation campaign designed to bring an end to statemandated segregation, calling attention to the shabby accommodations provided for blacks, as well as arguing the damaging psychological effects that segregation had on black school children. One case was brought on behalf of Linda Brown, a third-grader from Topeka, Kansas. Several additional school segregation cases were combined into one, known as Brown v. Board of Education. This case reached the Supreme Court in 1953.