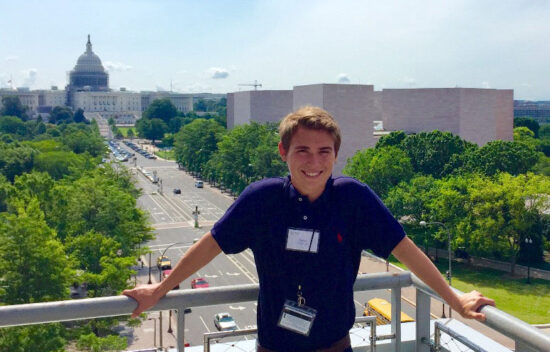 Daniel is currently a senior at Fox Chapel Area High School in Pittsburgh. In addition to his academic pursuits, he is an active member of his school’s FBLA team, crew team, forensics club, chess club, and orchestra. Daniel has worked diligently to pursue his passions, and he is a regional silver and bronze medalist in crew, and a two-time state qualifier in the FBLA.

Daniel has participated in the Institute’s online debate platform, and was also selected to attend the 2017 Constitutional Academy. Reflecting on his experience at the Academy, Daniel says he “loved having open and civil discussions on a variety of hot political topics with students from all over the nation. Constitutional Academy strengthened my understanding of the Constitution.”

He is known as something of a history buff, excelling in his AP U.S. History, AP World History, and AP Government courses. When asked about how the Constitution and the Founding principles play a role in his life he says, “I want to tie the Constitution into my life by respecting the rights that I believe everyone has.” Daniel believes that the Constitution is the most important document in our country’s history, as it secures certain rights for citizens and facilitates freedom.

Daniel is looking forward to graduating this coming spring and taking his talents to either the University of Pittsburgh, Holy Cross, Hillsdale College, or Loyola University in Maryland. After majoring in political science or business, Daniel aspires to attend law school to become a Constitutional lawyer. He desires to help others understand their rights and guarantee their protection under the Constitution.