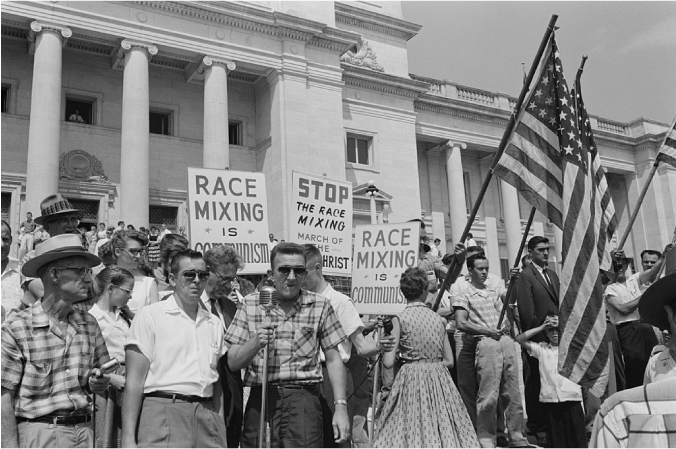 Black Americans overwhelmingly approved of the Supreme Court’s unanimous 1954 decision in Brown v. Board of Education. In resolving a lawsuit brought by Thurgood Marshall’s NAACP legal team, the Court’s ruling in the case prohibited public school segregation, largely on the basis of the psychological and emotional damage it inflicted on African American children. But the ruling was hampered by its implementation order of May 1955, which famously declared that public schools should desegregate “with all deliberate speed.” In response, white supremacists launched a campaign across the South of “massive resistance” led by the White Citizens’ Council movement and the revitalized Ku Klux Klan. This fierce opposition now had plenty of time to mobilize its forces, with lawsuits and boycotts backed by terrorism.

Black families were hopeful for the long run but dreaded the short run, fearing violent retaliation for integration efforts. In Little Rock, Arkansas, soon after the Brown decision, 12-year-old Melba Beals was assaulted on her way home from school by a white man who yelled, “I’ll show you niggers the Supreme Court can’t run my life,” as he tried to tear off her clothes. She fought back and got away.

When the Little Rock school board and state NAACP decided to integrate Central High School in the fall of 1957, Beals courageously signed up to go, supported by her mother and grandmother. She and eight other African American students were chosen from 100 who volunteered.

In early September 1957, Governor Orval Faubus ordered the Arkansas National Guard to block the black juniors and seniors, dubbed the “Little Rock Nine,” from entering the school. Because she had not received a phone call that the Little Rock Nine were not going to go to school on the first day, 15-year-old Elizabeth Eckford was alone when she faced the white mob’s cruel taunts and threats. With the guardsmen refusing to intervene on her behalf, the mobs grew in size and threat. Eckford was chased by angry whites and barely escaped the dangerous situation.

Federal judge Ronald Davies tried to counter the governor’s efforts to thwart the desegregation plan, which had been two years in the making. When Davies ordered Faubus to remove the Guard, the nine children were admitted into the school, but they were treated viciously by some white students. When she felt threatened, Beals tried to escape into a gym class, but a mob led by white mothers invaded the school and came after her. “Get the nigger,” a woman screamed. Another knocked her down. “She’s bleeding. What do you know. Niggers bleed red blood. Let’s kick the nigger.” Beals ran a gantlet of punches, kicks, and spit until she got free. The other eight faced similar traumatic experiences trying to get an education. The mob was so overpowering that a scared school leader confided: “We may have to let the mob have one of these kids. . . It may be the only way out. There must be a thousand people out there, armed and coming this way.”

All nine got out, but the attacks grew worse during the week. Though opposed to the Brown decision, President Dwight Eisenhower bowed to liberal and popular pressure and sent in the military to prevent the violence from spiraling out of control. From the Oval Office he justified his decision: “Mob rule in Little Rock menaces the very safety of the United States and the free world.” Twelve hundred battle-equipped, bayonet-wielding paratroopers from the 101st Airborne Division, in 52 planeloads, descended on Central High and escorted the students to school past racist slurs and threats. Soldiers were assigned to protect each student during the school day.

Though the soldiers stayed only a few weeks, desegregation took hold by fits and starts. The Little Rock Nine made friends with some white students and broke down the resistance. However, the struggle for the individual students continued. Minnijean Brown was suspended on several occasions after incidents provoked by white students. Finally she was expelled, to the delight of many white students who adopted the slogan “One down, eight to go.” Ernest Green graduated at the end of the school year. However, Governor Faubus closed the Little Rock high schools during the next school year, and politicians in other states did likewise. The court later overturned this move. Only three of the Little Rock Nine graduated from Central High; most of the others left and graduated from other schools.

Despite Brown v. Board, only small numbers of students attended integrated schools across the South, delaying progress even further. The civil rights movement had aimed to achieve full public-school integration by 1963 (even with many whites switching to private schools). But southern schools were not significantly integrated until the early 1970s, and then only under strong federal pressure. In the North, de facto segregation of neighborhoods essentially led to segregation of schools in local communities. Decades after the Little Rock Nine had made their stand, schools in the South and North were as segregated as ever because of entrenched socioeconomic divisions. Nevertheless, the process had started, because of actions by the branches of the national government but also, and perhaps more importantly, because of the courage of the Little Rock Nine and other African American students like them.

3. Thurgood Marshall was the

4. The result of the Little Rock Nine case was that

5. “Mob rule in Little Rock menaces the very safety of the United States and the free world.” This quotation is from

6. After federal troops left Little Rock, the governor of Arkansas

WHEREAS such obstruction of justice constitutes a denial of the equal protection of the laws secured by the Constitution of the United States . . .

NOW, THEREFORE, I, DWIGHT D. EISENHOWER, President of the United States, under and by virtue of the authority vested in me by the Constitution and Statutes of the United States, including Chapter 15 of Title 10 of the United States Code, particularly sections 332, 333 and 334 thereof, do command all persons engaged in such obstruction of justice to cease and desist therefrom, and to disperse forthwith; and

WHEREAS the command contained in that Proclamation has not been obeyed and willful obstruction of enforcement of said court orders still exists and threatens to continue: . . .

SEC. 2. The Secretary of Defense is authorized and directed to take all appropriate steps to enforce any orders of the United States District Court for the Eastern District of Arkansas for the removal of obstruction of justice in the State of Arkansas with respect to matters relating to enrollment and attendance at public schools in the Little Rock School District, Little Rock, Arkansas. In carrying out the provisions of this section, the Secretary of Defense is authorized to use the units, and members thereof, ordered into the active military service of the United States.”

1. Which of the following had the most direct impact on the sentiments expressed in the excerpt?

2. Which individual from the nineteenth century would most likely have agreed with the sentiments expressed in the excerpt?

3. Which governmental policy was overturned by as a result of the text in the excerpt?

Hitchcock, William I. The Age of Eisenhower: America and the World in the 1950s. New York: Simon and Schuster, 2018.

Nichols, David A. A Matter of Justice: Eisenhower and the Beginning of the Civil Rights Revolution. New York: Simon and Schuster, 2007.