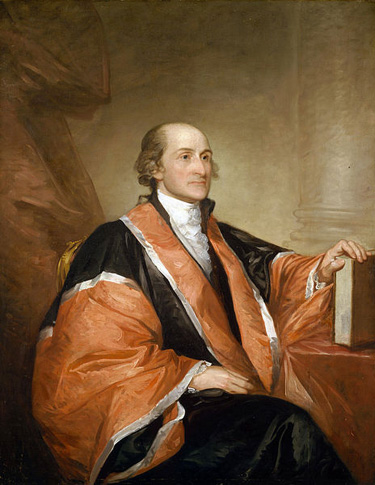 In 1793, Great Britain and France went to war, and President Washington declared the United States would remain neutral. Seeking free trade with both sides, the young nation instead found itself caught in middle of the conflict. American ships bound for trade in Europe were seized on the high seas and confiscated by the navies of both countries, especially Great Britain, which had greater control of the Atlantic Ocean.

Instead of commercial discrimination, however, President George Washington chose another path. He appointed Chief Justice John Jay as a special envoy to Great Britain to try to negotiate a peaceful settlement. Although cordially received in London, Jay could not wring many concessions from the British, because the fledgling United States was still militarily weak. The British agreed to surrender Northwestern posts on U.S. soil that they had occupied since end of the Revolutionary War, in violation of the 1783 peace treaty. The British also promised to pay reparations for past seizures of U.S. ships but provided no guarantee against future seizures. In return, the United States granted Great Britain most-favored-nation status, in effect surrendering the right to punish the British through commercial discrimination and promised to pay its pre-war debts to British merchants. The treaty also largely accepted British definitions of neutral rights and contraband of war.

Jay had obtained as many concessions as possible considering the relative strengths of the two nations, but Americans generally and Jeffersonian-Republicans specifically found the treaty highly disappointing because it did not promise to end violations of the country’s neutral rights. The treaty arrived in the United States in early March 1795, but Washington was so dissatisfied with it that he kept the treaty secret until the Senate could convene to consider it. He knew the Jeffersonian-Republican opposition would score political points opposing the unpopular treaty, and, in fact, in July 1795, the Senate barely approved the treaty by the required two-thirds margin. The vote was along party lines, with Federalists for and Jeffersonian-Republicans against. The Senate struck out Article XII, which it thought unacceptably restricted U.S. trade in the British West Indies by allowing only small American ships to trade there.

When a senator leaked the treaty to Benjamin Franklin Bache’s partisan Jeffersonian-Republican newspaper, the Philadelphia Aurora, in July 1795, an outcry against the treaty swept the nation. Madison said the reaction was “like an electric velocity” through “every part of the Union.” People at parades on Independence Day burned the treaty and Jay in effigy, causing Jay to remark that he could walk the length of the eastern seaboard by the light of the flames. In New York, when Alexander Hamilton tried to defend the treaty, an angry crowd pelted him with stones and chased him off.

Jeffersonian-Republicans were especially infuriated because they saw the treaty as a humiliating sellout that virtually put the United States back into a colonial status with respect to monarchical Great Britain. It confirmed in their minds that the Federalists were the party of monarchy. Madison described the treaty as being “full of shameful concessions, of mock reciprocities, and of party artifices” that would prove “fatal to the interests, the happiness, and perhaps finally to the liberty of the United States.”

President Washington agonized over whether to sign the treaty. On one hand, it would guarantee the peace with Great Britain that the new nation so desperately needed, and it was probably the best deal the United States could get, considering its relative military weakness. On the other hand, the agreement fell far short of expectations, making it horribly unpopular. In August, Washington signed it.

Once Washington had approved the agreement, attention shifted to the House of Representatives, where the Jeffersonian-Republican majority resolved to kill it. To decide on a course of action, Republicans in the House held the first party caucus (meeting) in American politics, during which they agreed on a two-part strategy. First, they requested that the president turn over correspondence pertaining to the negotiations. Second, the Jeffersonian-Republicans tried to exercise the “power of the purse” by voting down the appropriations necessary to implement the treaty.

Washington angrily refused to turn over the requested documents, claiming the Constitution gave control of foreign policy to the president and Senate alone, and not to the House. With this, he established the principle of “executive privilege,” which is the right of the president to withhold information from Congress. Jeffersonian-Republicans answered by adopting resolutions, supported by Madison, declaring that while treaty-making power belongs to the president and Senate, the House cannot be forced to appropriate funds against its better judgment or to surrender its constitutional powers, such as control of commerce. Washington declared that this confrontation brought the Constitution “to the brink of a precipice.”

At first it seemed like the Jeffersonian-Republicans had the votes to block appropriations. Before the final vote, however, the Federalists rallied public support for the treaty. They held pro-treaty meetings and gathered pro-treaty petitions. Federalist Fisher Ames delivered a moving speech in the House warning that rejection of the treaty would lead to dire consequences, including war with Great Britain and economic recession.

The Federalists also skillfully made the debate as much about defending an immensely popular president as about the merits of the treaty. They equated support for the treaty with support for Washington, and opposition to the treaty with opposition to Washington. Once the vote in the House became a referendum on the president himself, the Jeffersonian-Republican majority melted away. Madison wrote, “The name of the [president] is every where used with the most wonderful success – in subduing- popular objections” to the treaty. In the end, by a narrow three-vote margin, the House voted in April 1796 to fund the treaty.

The Jay Treaty led to some negative repercussions, including hostilities with France (which saw the treaty as an Anglo-American alliance) and higher taxes a few years later. But it also produced several benefits for the new republic. For example, Spain, worried by the United States’ apparent reconciliation with Great Britain, signed the Treaty of San Lorenzo in 1795 with Thomas Pinckney, opening the Mississippi River to American trade. Settlers in the trans-Appalachian West could now export their produce through New Orleans. The United States also began to enjoy a lucrative trade with the British West Indies, thanks to reduced tension between the two nations. Overall, U.S. exports to the British empire tripled from 1795 to 1800.

The battle over the Jay Treaty worsened the Federalists’ and Jeffersonian-Republicans’ partisan rivalry, however, which continued into the 1796 presidential campaign that led to John Adams’s narrow victory. The Jay Treaty itself demonstrated that the United States was ill-prepared for war with European nations but would defend its national sovereignty against violations. President Washington also confirmed that an energetic executive would exercise strong latitude in the conduct of U.S. foreign policy.

1. Despite President Washington’s Neutrality Proclamation in 1793

2. A major precedent established by President Washington during the ratification of the Jay Treaty was

3. A significant benefit for the United States that resulted from the ratification of the Jay Treaty was

4. To get the appropriations necessary for the success of the Jay Treaty, Federalists were able to

5. The Jay Treaty between the United States and Great Britain in the 1790s had all the following provisions except

“I persuade myself, Sir, it has not escaped your observation, that a crisis is approaching, that must, if it cannot be arrested, Soon decide whether order and good Government Shall be preserved, or anarchy and confusion ensue. I can most religiously aver, I have no wish that is incompatible with the dignity, happiness and true interest of the people of this country. My ardent desire is, and my aim has been (as far as depended upon the Executive Department) to comply Strictly with all our engagements foreign and domestic; but to keep the United States free from political [connections] with every other country. To See them independent of all, and under the influence of none. In a word, I want an American Character; that the powers of Europe may be convinced we act for ourselves and not for others. This in my Judgement, is the only way to be respected abroad and happy at home – and not, by [becoming] the partisans of Great Britain or France, Create dissentions; disturb the public Tranquility; and dissolve, perhaps forever, the Cement which binds the union. I am Satisfied that these Sentiments cannot be otherwise than congenial to your own.”

Letter from George Washington to Patrick Henry on the subject of The Jay Treaty, October 9, 1795

2. The opinion expressed by George Washington in the excerpt would not have been shared by

3. The views expressed in the excerpt support