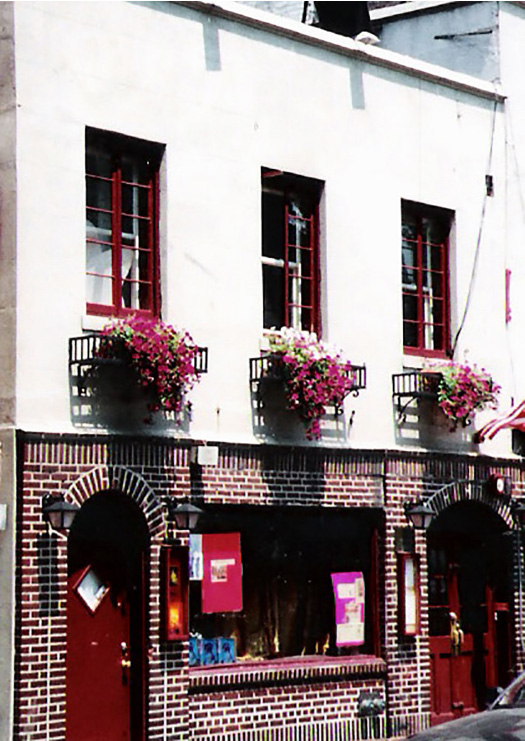 Use this Narrative with the César Chávez, Dolores Huerta, and the United Farm Workers Narrative and the American Indian Activism and the Siege of Wounded Knee Narrative while discussing the various civil rights movements occurring during the 1970s.

After World War II, the civil rights movement had a profound impact on other groups demanding their rights. The feminist movement, the Black Power movement, the environmental movement, the Chicano movement, and the American Indian Movement sought equality, rights, and empowerment in American society. Gay people organized to resist oppression and demand just treatment, and they were especially galvanized after a New York City police raid on the Stonewall Inn, a gay bar, sparked riots in 1969.

Around the same time, biologist Alfred Kinsey began a massive study of human sexuality in the United States. Like Magnus Hirschfield and other scholars who studied sexuality, including Havelock Ellis, a prominent British scholar who published research on transgender psychology, Kinsey believed sexuality could be studied as a science. He interviewed more than 8,000 men and argued that sexuality existed on a spectrum, saying that it could not be confined to simple categories of homosexual and heterosexual. To evaluate sexual activities, Kinsey used a scale that assigned a number from zero to six to rate sexual urges. A rating of zero meant “exclusively heterosexual” and a rating of six meant “exclusively homosexual.” Kinsey rejected most people’s self-identification at either end of the spectrum because their other answers indicated that they often fell somewhere in between. Kinsey broke ground by discussing a taboo subject in frank terms. His analysis broke down rigidly held categories of sexuality and empowered many gay people to fight for social change.

By the 1960s, a new wave of social activism, fueled by the civil rights movement and other social movements, inspired them to resist oppression and discriminatory laws. In August 1966, the police raided Compton’s Cafeteria, a hangout for mostly transgender and queer people in the Tenderloin neighborhood of San Francisco, after the owners of the cafeteria had complained that transgender people were loitering there. They congregated at the Compton’s Cafeteria because gay bars often were hostile to them and prohibited them from hanging out there. When the police arrived at Compton’s to arrest the people for loitering, an uprising ensued. The customers fought the police, throwing coffee cups, smashing plates, and breaking windows. The next evening, protestors gathered in front of Compton’s Cafeteria to mark their resistance to oppression.

The exact date of the Compton’s Cafeteria uprising remains unknown, but it did predate a better-known event called the Stonewall Uprising, which lasted six days. On June 28, 1969, a group of LGBTQ people resisted and then fought back after the police attempted to raid their bar, the Stonewall Inn, in New York City’s Greenwich Village. Several hundred people gathered to watch the police attempting to arrest patrons of the business, and as the crowd’s response escalated from mockery to anger, the mood shifted and violence and destruction erupted inside the bar and in the street. Rocks and bottles were thrown, a car was overturned, garbage was set on fire, and police and bystanders were injured. Although members of the gay community were divided in their opinions about the riot, hundreds of people returned to the scene for the next several nights, some to continue violent opposition to the police and others to express their sexuality in public for the first time.

At the time, gay bars were often hidden and vulnerable to attacks by police, who were authorized by city governments to shut down establishments that promoted what was considered lewd behavior. Many gay bars, including the Stonewall Inn, were also run by the mafia, which paid off corrupt police officers to stay open. Although this sometimes worked, municipal officials also frequently urged police to clamp down on gay bars by asserting that they did not have proper liquor licenses. Before Stonewall, LGBTQ people lacked political clout and had no recourse even if their bars were attacked, so the police often did not even need to justify their raids. By standing up to the police at the Stonewall Inn, LGBTQ people began an organized movement to fight discrimination. Consequently, the Stonewall Uprising has come to symbolize the start of the modern gay liberation movement.

Stonewall energized LGBTQ people to become more fiercely political. Before Stonewall, a gay political effort known as the homophile movement had brought gay men and lesbians together to form a political coalition. Members of the movement staged the first gay protest in Philadelphia on July 4, 1965, in front of Independence Hall. During the demonstration, they followed the politics of respectability, a strategy learned from the black civil rights movement, and dressed in suits and skirts.

After Stonewall, however, a more radical political consciousness developed that resulted from the formation of many new groups, including the Gay Liberation Front and Radicalesbians, whose members rejected these strategies and called for a more militant response to homophobia. These groups were interested not just in gaining rights but also in challenging systems of power like capitalism, which they believed oppressed them. They viewed Stonewall as an opportunity to revolutionize society and to rethink the meaning of sexuality. They drew on theories advanced by early twentieth-century sexologist Magnus Hirschfield and others to conceptualize their relationships and identities.

On the cultural front, alternative newspapers popped up all over North America, from Toronto to Phoenix to San Francisco. The papers included sections devoted to community updates, cultural events, and personal ads, but they also highlighted new political concerns, namely efforts to raise awareness about the problems of gay people in prisons and concerns about gay health. Although many various religious institutions believed homosexuality was sinful, some LGBTQ people did not believe that their faith and sexual orientation were at odds and took shelter in religious communities organized by gay people. Founded in 1968 by Rev. Troy Perry, the Metropolitan Community Church (MCC) was established as a congregation by and for LGBTQ people; it opened scores of churches across the country that remain active today. LGBTQ people also opened bookstores, cafes, libraries, and other community centers throughout the United States.

Yet despite these revolutionary changes, violence stalked the gay liberation movement during the 1970s. On June 24, 1973, members of the MCC gathered in the Upstairs Lounge, a bar they had converted into a church in New Orleans, to hold their weekly meeting. An unidentified arsonist set fire to the establishment, tragically killing 32 people and injuring many others. The arsonist was never identified. It was the largest tragedy involving LGBTQ people in U.S. history until the 2016 shooting at the Pulse Nightclub massacre in Orlando, Florida.

More tragedies followed. In 1981, many gay men were becoming sick and dying of a mysterious disease. Public health authorities, journalists, doctors, and even many in the gay community blamed gay liberation and the loosening of sexual restrictions for the epidemic, but no one in the medical or scientific community actually understood the behavior of the virus. In fact, it was first defined as GRID, which meant gay-related immune deficiency. The medical community later referred to the disease as AIDS, an acronym for acquired immune deficiency syndrome. On September 24, 1982, the U.S. Centers for Disease Control and Prevention (CDC) first used the term AIDS and offered the first definition of it.

Devastated by the spreading epidemic, many LGBTQ people intensified their political activism. They rushed to the streets and organized protests and rallies to call attention to the epidemic, held fundraisers to gain money to research the virus, and formed many organizations, most notably Act Up, which was founded in New York City in March 1987.

The political activism of the 1970s and 1980s began to change public attitudes about LGBTQ people in American society and led to significant changes in public policy. In Lawrence v. Texas (2003), the Supreme Court legalized same-sex sexual activity. In 2010, Congress permitted gay people to serve openly in the military. In 2013, the Supreme Court struck down the Defense of Marriage Act in United States v. Windsor, and Obergefell v. Hodges (2015) made same-sex marriage legal under the Equal Protection Clause of the Fourteenth Amendment. Attitudes continued to change, indicating growing acceptance of LGBTQ people.

1. All the following were significant in increasing awareness of the gay liberation movement except

2. Alfred Kinsey’s research on sexuality was controversial because of

3. One major effect of the gay liberation movement was the development of

4. The homophile movement staged the first openly gay protest in

5. Troy Perry was best known for

6. A significant difference between the gay rights movement after Stonewall and the Gay Liberation Front (GLF) was that the GLF and its allies

1. The situation shown in the image contributed most immediately to the

2. A historical development similar to that depicted in the image was the

3. Individuals such as those in the image would most likely have agreed with the sentiments expressed by which late nineteenth-century group?

D’Emilio, John, and Estelle B. Freedman, eds. Intimate Matters: A History of Sexuality in America. New York: Harper and Row, 1988.

Gallo, Marcia M. Different Daughters: A History of the Daughters of Bilitis and The Rise of the Lesbian Rights Movement. New York: Seal Press, 2007.