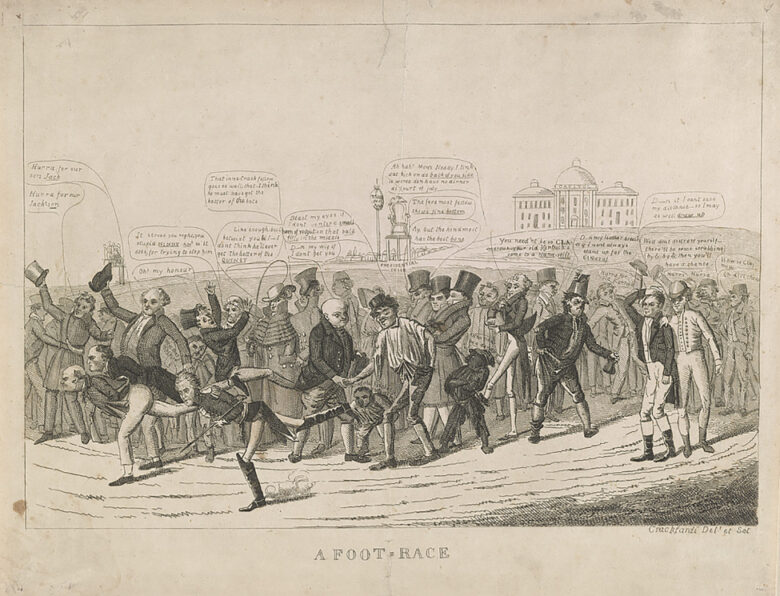 This Narrative can be assigned to students with the Cartoon Analysis: The Presidential Election of 1824 Primary Source.

After the demise of the First Party System, the United States seemed to enter what is called the Era of Good Feelings, a period of unity and patriotism following the War of 1812. In 1820, President James Monroe of Virginia ran for reelection virtually unopposed, winning nearly all the votes in the Electoral College. But this apparent political unity did not last. Four years later, in 1824, the nation experienced one of the most contentious and controversial elections in its history. Four candidates vied for the presidency; all were Jeffersonian Republicans representing different regional interests. Secretary of the Treasury William H. Crawford of Georgia was the favorite of the southern planter class; Speaker of the House of Representatives Henry Clay of Kentucky and U.S. senator and former U.S. Army general Andrew Jackson of Tennessee represented western interests; and Secretary of State John Quincy Adams of Massachusetts was the son of a former president.

No candidate garnered the 131 electoral votes needed to secure a majority in the Electoral College and thus win the election. As a consequence, in accordance with the Twelfth Amendment, the election was constitutionally thrown to the House of Representatives, where each state delegation would cast one vote. If all four candidates had remained on the ballot, Clay would have had a tremendous advantage because he exercised a great deal of influence and authority in the House. But the Twelfth Amendment stipulated that only the top three vote-getters in the Electoral College were placed before the House. With the fewest Electoral votes but tremendous influence, Clay thus found himself in an unusual position – one that could make him a “kingmaker.”

In the weeks after the general election, Clay carefully weighed whom to support in the upcoming House election. On a personal level, he disliked Adams, but the New Englander supported Clay’s “American System” of federally funded internal improvements. On Sunday night, January 9, 1825, Clay and Adams had a meeting. Jacksonians soon accused them of making a bargain in which Clay would support Adams in exchange for his choice of a position in the cabinet. The accusation was based on the assumption that Clay would want to be secretary of state, because that office was the primary stepping-stone to the presidency in the early nineteenth century. There was no evidence for the charge and Adams and Clay vehemently denied it, but the Jacksonians suspected a conspiracy against them.

To win, a candidate needed the votes of thirteen of the twenty-four state delegations in the House. Clay went to work, lobbying members of Congress to support Adams. As the day of the election approached, Adams had the support of twelve state delegations, Jackson seven, and Crawford four. Only one state, New York, was unpledged. Its delegation, which consisted of thirty-four men, was evenly divided between Adams and Crawford. Crawford’s main supporter in Congress, Senator Martin Van Buren of New York, hoped that a deadlock in the House might swing enough states over to Crawford. Clay, however, knew that if he could persuade just one Crawford man from New York to switch to Adams, the New Englander would carry the day. Indeed, when the balloting was complete, Adams had won the New York delegation and the election.

That night, President Monroe held a reception at the White House. Jackson politely approached Adams and reached out his hand. “How do you do, Mr. Adams?” he said. “I hope you are well, sir.” Adams replied, “Very well, sir. I hope General Jackson is well.” But this cordiality was short-lived. Shortly thereafter, Adams asked Clay to serve as his secretary of state, and Clay accepted.

Clay was a leading statesman who had been speaker of the house, served on the delegation that negotiated the Treaty of Ghent, and had broad experience on domestic and foreign policy issues. In short, he was one of the best men for the job. Still, upon hearing this news, a suspicious Jackson erupted. “So you see,” he wrote to a private correspondent, “the Judas of the West has closed the contract and will receive the thirty pieces of silver.” Jackson did not challenge the validity of the election, because it had taken place in accordance with the rules prescribed in the Constitution, but he suspected a corrupt bargain to keep him out of office and vowed to win the next time. Privately, he predicted that Clay’s “end will be the same” as that of Judas, who hanged himself after betraying Jesus.

Jackson had correctly predicted Clay’s political future. Political observers almost immediately began castigating Adams and Clay for their apparent duplicity. “Expired at Washington, on the ninth of February,” crowed one newspaper editor, “of poison administered by the assassin hands of John Quincy Adams, the usurper, and Henry Clay, the virtue, liberty and independence of the United States.” Indeed, suspicion of having participated in this “corrupt bargain” became a significant stain on Clay’s political reputation.

Jackson soon began organizing his forces for the next presidential election, forming an opposition party to Adams and Clay (later the Democratic Party). In 1828, Jackson won the presidency with the help of a strong national party machinery that held rallies, barbecues, and parades, and published anti-administration newspapers. His victory ushered in a new era for the presidency. Most of his predecessors (with the exception of the two Adamses) had been part of the Virginia gentry. Jackson, by contrast, was a self-made frontier man who had been born into poverty in the Carolina backcountry but had risen through the ranks of society to become a lawyer, judge, senator, army general, and, eventually, president. His successors would be of similarly humble beginnings, thus giving the nineteenth-century United States a more democratic feeling.

In 1832, Jackson won reelection over a sharply divided opposition. In 1834, however, the Whig Party arose in opposition to “King Andrew.” The early Whigs struggled to define a positive party platform (in 1836, they even ran four regional candidates for president), but after the Panic of 1837, they articulated a program for economic recovery through a tariff, a national bank, and federally funded internal improvements. In many ways, the Second Party System arose more in response to particular presidential contests and personalities than to tangible political issues. Jackson’s coalition formed around Old Hickory, as he was known, with the express purpose of removing the Adams administration from power, and the aptly named Whigs came together against what they perceived as a monarchical Jackson (their name harkened back to the seventeenth-century English Whig Party, which opposed the Stuart monarchy).

The Jacksonian Era was a period of intense democratization. Many states adopted new state constitutions that eliminated property qualifications to vote and thereby expanded suffrage to nearly all white men. At the same time, many of these constitutions disenfranchised free African American men, and none gave women the vote. Offices that had previously been appointed, like state judgeships, became elective. The Electoral College was also democratized. By 1832, every state but South Carolina was choosing its presidential electors by popular vote, and most states also adopted the unit rule, which gave the winning candidate in each state that state’s entire electoral vote. These electoral reforms brought vast numbers of new voters into the political process while also reducing the possibility of a backroom deal to win the presidency. The Jacksonians helped usher in a new era of mass political participation.

1. How did Andrew Jackson respond to the outcome of the presidential election of 1824?

2. Use the information in 1824 United States Presidential Election to respond the following question.

Which statement is accurate based on the results?

3. The constitutional provision that played a significant part in the election of 1824 was the

4. Which 1824 presidential candidate was not considered a representative of southern or western interests?

5. Henry Clay most likely gave his support to John Quincy Adams in the 1824 presidential election because

6. The “corrupt bargain” in the history of the early republic refers to the Jacksonians’ accusation that

7. Which political party formed a decade after the political organizing of the Jacksonians?

8. Until the election of Andrew Jackson, the United States’ chief executives all had come from

9. The Whig Party was characterized by all the following except

If the Jackson Party prevail, a majority of the next Congress will be opposed to the tariff, to mechanics, manufacturers, and domestic industry. As proof of this, the Jackson papers, nearly one and all, have published articles recommending the repeal of all laws that have been passed to encourage our mechanics and manufacturers. The consequence will be, that the sound of the shuttle will no more be heard. Our stores will be filled with British and Scotch ginghams, . . . checks and bedecks; and not a place will be found for a yard of American cloth.”

1. Which group would most directly support the arguments raised in the excerpt?

2. Which of the following was the most immediate result of the argument expressed in the excerpt?

3. The excerpt reflects which long debate in U.S. history?