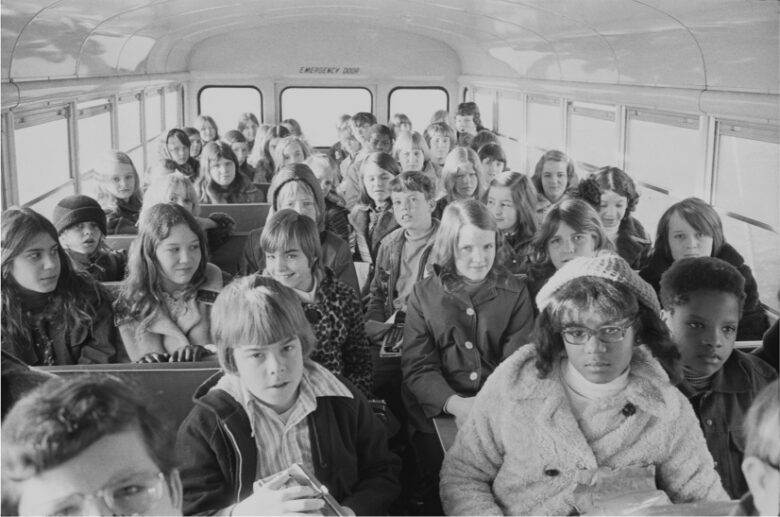 “Separate but equal” had been the law of the land since the Plessy v. Ferguson decision of 1896 affirmed the system of state-sanctioned racial segregation in the South and some parts of the North that historians have called “Jim Crow.” This policy was clearly seen in public education, with separate schools for white and black students that were hardly equal. In Brown v. Board of Education (1954), the Supreme Court unanimously ruled that “in the field of public education, the doctrine of ‘separate but equal’ has no place. Separate educational facilities are inherently unequal”. The following year, in its Brown II decision, the Court declared that desegregation must happen “with all deliberate speed,” a term filled with great ambiguity.

White southerners took it to mean that there was no urgency on school desegregation, and few southern schools integrated immediately after the Brown decisions. Instead, white southerners followed a policy of “massive resistance” to integration, which included some southern districts closing their public schools rather than integrating. In 1956, approximately 100 members of Congress signed the “Southern Manifesto” opposing the Supreme Court’s Brown decision as a “clear abuse of judicial power.”

In 1957, the attempt by the Little Rock, Arkansas, Board of Education to integrate its public high school with nine African American students met with fierce resistance from local whites and Governor Orval Faubus. In response, President Dwight D. Eisenhower ordered units of the Army’s 101st Airborne to Little Rock to protect the black students and make sure that the integration plan was implemented.

At the grassroots level, the Brown decision helped pave the way for the end of Jim Crow laws by igniting the civil rights movement that eventually led to the historic Civil Rights Act of 1964 and Voting Rights Act of 1965. Still, as late as the early 1960s, white resistance to integration meant that only a small percentage of black children were attending integrated schools in the South. Once schools were legally integrated, residential and demographic factors often meant that many African American students still went to schools that were mostly black. In the South, after the Brown decision, whites also created private schools for their children that did not have to comply with court-ordered integration, so there were fewer white students enrolled in public schools.

Charlotte, North Carolina, had moved early to integrate its schools. However, residential housing patterns meant that black students were mostly concentrated in the central Charlotte area and attended mostly black schools even after legal segregation had ended. White students mostly lived outside the center city and attended mostly white schools. The NAACP challenged these racially imbalanced schools in court, and a judge ordered the city to create a plan to integrate the schools. The case reached the Supreme Court, which ruled unanimously in Swann v. Charlotte-Mecklenburg Board of Education (1971) that busing was a legitimate tool to achieve racial integration in schools.

In Charlotte and many other southern cities, busing plans were implemented to transport white and black children across districts and neighborhoods to ensure all schools were racially balanced, meaning they had an appropriate mix of students of both races as determined by the courts. Simply ending state-sanctioned segregation in schools was no longer enough. Courts were now moving away from race-neutral actions that had ended de jure segregation and toward enforcing racial quotas for individual schools. Courts were also becoming more active in designing desegregation plans for specific schools and even taking over basic duties of local school districts such as teacher assignments. Many parents who wanted their children to attend public schools close to home thought these judicial orders imposed an unfair burden on their sons and daughters.

During the 1960s, the battle for school integration began to turn to northern cities, which largely did not have a legalized system of racially segregated schools prior to Brown. However, residential housing patterns, a growing African American population in the inner city, and a corresponding “white flight” of middle-class residents to the suburbs meant that northern urban districts were seeing increasing numbers of racially imbalanced schools. Many inner-city schools were now increasingly populated by mostly black and minority students. By the early 1970s, cities like Denver and Detroit found themselves under court-ordered desegregation plans.

Because Detroit by this time had become a majority-black city, the lower courts ordered a desegregation plan that would consolidate suburban school districts with the Detroit district, allowing for busing across city lines to achieve racial balance. In the 1974 decision Milliken v. Bradley, the Supreme Court struck down the Detroit metropolitan plan imposed by the lower court and said that suburban districts could not be forced into such desegregation plans as long as they were not found liable for any overt discrimination. The decision limited the extent of desegregation measures for the first time and meant that any desegregation plans in northern cities would have to take place within school district lines.

One of the most controversial busing cases occurred in Boston, Massachusetts. The city had abolished legal segregation in its schools in the 1850s. However, by the 1960s, as the city’s African American population grew, neighborhood schools became increasingly racially imbalanced, and many of the majority-black schools were seen as inadequate and not serving the needs of their students. In 1965, the Massachusetts state legislature passed the Racial Imbalance Act, which declared any school that was more than 50 percent nonwhite to be racially imbalanced. Schools that were overwhelmingly white – that is, most suburban schools – were not included under the law, meaning that the law’s impact was mostly felt in large cities such as Boston.

Boston was made up of many tight-knit and insular white ethnic neighborhoods that strongly opposed Judge Garrity’s plan and supported local neighborhood schools. For instance, South Boston, a heavily working-class, Irish Catholic neighborhood, became a center of antibusing activism. Groups such as Restore Our Alienated Rights (ROAR) were formed to oppose the busing plan. They planned protest marches and used tactics of civil disobedience similar to those of the civil rights movement in an effort to stop the busing plan. Garrity’s busing plan “paired” the mostly African American neighborhood of Roxbury with the largely Irish American neighborhood of South Boston. South Boston became the hub of opposition to busing. Opponents of busing tended to be mostly working-class white Bostonians who felt they were being made to bear the brunt of integration while more affluent residents and suburbanites were immune from its impact. The busing controversy led to increasing racial tensions between blacks and whites that occasionally broke out in violence.

More than a decade after Garrity’s decision, Boston regained control over its schools; the last remnants of school busing in Boston were finally eliminated in 2013. The busing controversy accelerated white flight from Boston, with the schools losing almost 50 percent of their student body after 1975 and white students constituting less than 15 percent of the school population, down from more than 60 percent in 1970. For all the years of controversy and protest, Boston’s schools had little to show in terms of improved educational outcomes for students.

Popular and political support for busing declined nationwide as America entered a more politically conservative era. In subsequent decisions after 1990, the Supreme Court took up school desegregation cases dealing with Oklahoma City, Kansas City, and Seattle. In all these cases, the Court proved reluctant to remedy racially imbalanced schools. In 2000, a federal judge ordered that the Charlotte, North Carolina, school busing plan be ended and replaced with a system of school choice. Courts were less willing to entertain policies that were explicitly race-based, such as racial quotas, to racially balance schools. The history of busing in the 1970s exposed racial fault lines in American society after the successes of the civil rights movement of the 1960s.

1. Which of the following accurately compares racial segregation in northern and southern schools?

2. The term “massive resistance” in the context of the 1950s through the 1970s in the South refers to

3. In the Swann v. Charlotte-Mecklenburg Board of Education case (1971), the Supreme Court ruled that

4. In which Northeastern city did school busing for integration cause violent reactions?

5. Initially, the authority to create a solution for integrating public schools around the United States was assumed by

6. In the Supreme Court case Milliken v. Bradley (1974), which city was prohibited from forcing students across city lines to achieve integration?

7. Initially, other than massive resistance, groups that opposed race-based busing used all the following strategies to prevent it except

“The scope of permissible transportation of students as an implement of a remedial decree has never been defined by this Court . . . No rigid guidelines as to student transportation can be given for application to the infinite variety of problems presented in thousands of situations. Bus transportation has been an integral part of the public education system for years, and was perhaps the single most important factor in the transition from the one-room schoolhouse to the consolidated school. . . .

The importance of bus transportation as a normal and accepted tool of educational policy is readily discernible in this and the companion case Davis, supra. The Charlotte school authorities did not purport to assign students on the basis of geographically drawn zones until 1965 and then they allowed almost unlimited transfer privileges. The District Court’s conclusion that assignment of children to the school nearest their home serving their grade would not produce an effective dismantling of the dual system is supported by the record.

Thus the remedial techniques used in the District Court’s order were within that court’s power to provide equitable relief; implementation of the decree is well within the capacity of the school authority.”

1. The Supreme Court case that influenced the ideas in the excerpt was

2. The sentiments expressed in the excerpt contributed most directly to

3. The most significant context for the sentiments in the excerpt is