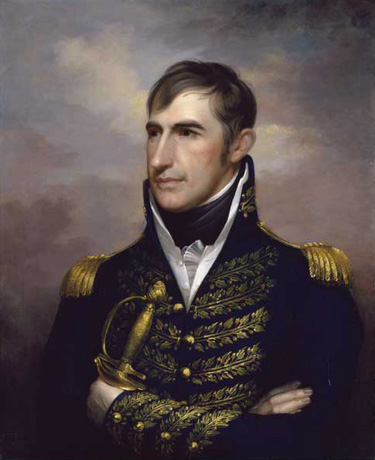 This Narrative should be assigned to students toward the beginning of Chapter 5, following The Lewis and Clark Expedition Narrative, to further broaden students’ knowledge of the Native American tribes Americans were interacting with.

In 1809, tensions were high on the American frontier. William Henry Harrison, governor of the Indiana Territory, responded to the desire of settlers in the territory to take land from the American Indians in the region and apply for statehood as soon as possible. Settlers also believed the British were provoking the Indian tribes, though they needed little encouragement to resist American expansion. Meanwhile, diplomatic relations between Great Britain and the United States were increasingly tense because of British violations of American freedom of the seas and a U.S. economic embargo on Britain and France.

In 1809, under the direction of President James Madison, Governor Harrison met at Fort Wayne (now part of Indiana) with at least a thousand Indians representing a variety of tribes. Harrison had spent the previous decade making land deals with various tribes in exchange for aid and then making the same deals with competing tribes. He used similar tactics at this meeting. Through much maneuvering and the creation of dissention within and among the tribes present, he purchased more than two million acres of prime farmland at “less than two cents per acre,” far less than the $2 per acre it was supposedly worth. Because no consensus existed among the Indians present, the United States won highly favorable terms from the few chiefs who benefitted from the exchange, leaving most of the others landless and powerless.

The Treaty of Fort Wayne, sealing the deals, was a catalyst for the re-emergence of the Shawnee prophet Tenskwatawa and the rise in power of his brother, the Shawnee warrior Tecumseh. The pro-British brothers argued that the sale of land to the United States had been illegal and unethical because the land sold “belonged to all Indians” not just the Miami, Potawatomi, and Delaware. Furious, Tecumseh and Tenskwatawa threatened to murder the signers. It was the first solid step toward the Battle of Tippecanoe and the frontier theater of the War of 1812.

Before undergoing a profound religious experience in the spring of 1805, Tenskwatawa had been an alcoholic and a failure. The Shawnees had hated him, calling him Lalawethika, “the Noise Maker.” So helpless and unskilled was he in battle and the hunt that he had actually shot out one of his eyes when practicing with a bow and arrow. Despised, he had then turned to alcohol. Only the reputation of his older brother, Tecumseh, allowed him to stay with the Shawnees. In a vision in 1805, however, everything changed. According to him, Tenskwatawa visited heaven and hell. Heaven, he said, was a paradise, a “rich fertile country, abounding in game, fish, pleasant hunting grounds and fine corn fields.” In paradise, people could hunt or play games as they wished. Hell, though, was a place of never-ending fire and tortures. Alcoholics drank molten lead, and other sinners had their arms or legs burned off. According to Tenskwatawa, a being he called the Creator commanded him in a dream to preach to all Indians, regardless of tribe. They were to abandon white ways and re-adopt their traditional native practices.

The prophet also claimed that the Creator had showed him the origin of white Americans. Unlike the Shawnees, the offspring of the Creator, Americans sprang from the Great Serpent of the Atlantic Ocean. Crawling onto the shores of North America, they first looked like giant crabs and settled in what is now Boston. Tenskwatawa exempted certain Europeans, including British, French, and Spanish, from this creation story, for they were also the offspring of the Creator and, therefore, brothers to the Shawnees. But he forbade any Indian to have contact with the Americans, because they were evil. Indians should never trade with Americans nor have relationships of any kind with them. They had corrupted some Indians (“witches”), and those Indians must be killed.

The Creator also gave Tenskwatawa a set of rules to give the Indians. First, they were to reject all American ways of living and return to their native ways. Second, they were to avoid alcohol and eat only native crops, because Tecumseh deemed all European-derived livestock unclean. They were to give up any sexual promiscuity and polygamy.

In reality, of course, the Shawnees could no longer remember a time that did not mix European and Indian ways; the multiple strands of the cultures had become too intertwined. But they convinced themselves that what they were doing was purely native. If they followed these divine laws, Tenskwatawa announced, the dead would return to live among them, and the game would flourish in the forests. Finally, in the dream, the Creator gave the prophet the name Tenskwatawa, which means “the Open Door.”

After he accurately predicted the disappearance of the sun (an eclipse), the Prophet garnered a huge following among hundreds and then thousands of discontented and dispossessed Great Lakes Indians. He also gave up alcohol and lived according to his own teachings. In 1808, he moved his followers to the juncture of the Tippecanoe and the Wabash rivers. The new village sat on Wea and Miami lands, a location intentionally chosen to be a direct insult to Wea and Miami sovereignty and integrity.

Tecumseh was a prominent Shawnee warrior. In 1808, recognizing the power of his younger brother’s religious rhetoric and crusade (though he had little respect for his brother or his brother’s beliefs), Tecumseh (the “Panther” or “Comet”) began to transform Tenskwatawa’s religious movement into a political one. He attempted to pull the village chiefs of the various northwestern tribes into a unified confederacy to counter the might of the expanding United States. He also continued to argue that all lands north of the Ohio River belonged to the Indians in common, decrying the Miami and Delaware sale in the Treaty of Fort Wayne.

Fearful of the Shawnee intentions, Harrison attacked Prophetstown (in the Indiana Territory) in November 1811. With Tecumseh in the South recruiting Indians for a new confederacy, the Prophet provided poor leadership against Harrison’s army. The battle destroyed much of his hold over the Indians, who now viewed him as a fraud for failing to protect them. Tecumseh, upon returning, assumed control of the alliance he and his brother had created. Yet the damage was done. Tecumseh led the Pan-Indian pro-British force valiantly against the U.S. troops in 1812-1813, but he found his allies to be self-serving, far more eager to serve their own interests than the goals of the pan-Indian movement. When the British prepared to withdraw from Detroit after their defeat by U.S. forces under Oliver Perry on Lake Erie, Tecumseh attempted to shame them into battle, charging them with cowardice. He rushed into the fight hoping his Indian and British allies would follow, but he met his own death at the Battle of the Thames, October 5, 1813.

Despite a short period of pan-Indian unity and military strength under Tecumseh, the War of 1812 had a devastating impact on Native Americans. With the evacuation of the British from the West, Native American tribes lost their leverage in playing off European empires in North America against each other or the United States. Moreover, they were too divided to muster the combined strength to resist American expansionism. American Indians in the Northwest Territory had lost their British allies and were pushed farther West. In the Southwest, Andrew Jackson won key victories in the Creek War that allowed him to impose the Treaty of Fort Jackson, taking 22 million acres of territory in Georgia and Alabama. Over the next two decades, the remaining American Indians would be forcibly removed from those areas.

1. A criticism the Indian tribes leveled against the Fort Wayne Treaty was that

3. The main goal of Tecumseh’s Confederacy was to unite Native American tribes

Refer to the map provided.

The map best illustrates which of the following?

6. What impact did Tecumseh have on his brother Tenskwatawa’s followers?

7. A main objection of Tecumseh to the Treaty of Fort Wayne was

“It is true I am a Shawnee. My forefathers were warriors. Their son is a warrior. From them I take only my existence; from my tribe I take nothing. I am the maker of my own fortune; . . .

The being within, communing with past ages, tells me that once, nor until lately, there was no white man on this continent; that it then all belonged to red men, children of the same parents, placed on it by the Great Spirit that made them, to keep it, to traverse it, to enjoy its productions, and to fill it with the same race, once a happy race, since made miserable by the white people, who are never contented but always encroaching. The way, and the only way, to check and to stop this evil, is for all the red men to unite in claiming a common and equal right in the land, as it was at first, and should be yet; for it never was divided, but belongs to all for the use of each. For no part has a right to sell, even to each other, much less to strangers – those who want all, and will not do with less.”

Tecumseh to Governor Harrison at Vincennes, 1810

1. In the excerpt, Tecumseh had a goal of

2. What was a direct result of the situation described in the excerpt?

3. Tecumseh’s statement in the excerpt reflects which continuity in U.S. history?

Calloway, Colin. The Shawnees and the War for America. New York: Viking, 2007.