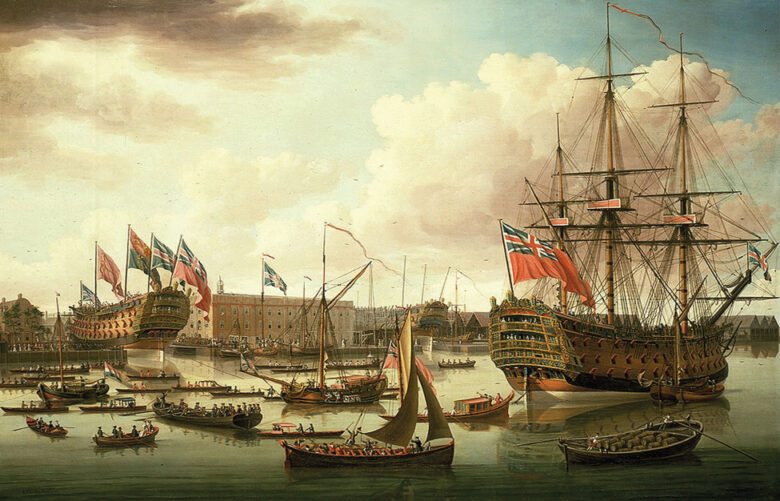 Use this Decision Point with the Thomas Jefferson and the Declaration of Independence Narrative to give students a full picture of the declaration.

July 4, Independence Day, has been the United States’ chief civic holiday since the American Revolution. The Founders, chief among them General George Washington and the leaders of the Continental Congress, have grown grander in our memory in the intervening time since 1776. Yet they did not rush into immortality. Far from it.

By sundown on April 19, 1775, Britain’s appointed Governor of Massachusetts, General Thomas Gage, retained authority only over greater Boston. Earlier that day, his troops had arrived in Lexington, but not before colonial riders had warned John Hancock and Samuel Adams “The Redcoats are coming!” Instead of arresting the rebels, proceeding to Concord to seize the colonial store of gunpowder, and returning to the capital having struck a mighty blow against colonial resistance, Gage’s men had kicked a hornet’s nest. By sundown, all Massachusetts beyond Boston was in open revolt. Hancock and Adams had new moral authority thanks to Gage’s botched attempt to have them arrested—probably for transportation to treason trials in England. Their triumphant progress to Philadelphia for the Second Continental Congress was marked by military escorts and celebratory dinners at every stage: Gage had made them into continental heroes.

Congress responded by naming Virginian George Washington commander in chief of the newly christened Continental Army. Samuel Adams’ cousin John, another Massachusetts congressman, had his way in choosing Washington and did so because of Washington’s considerable military experience and because he was a southerner who would bring geographical balance to the New England army outside Boston. Washington’s character and military bearing were also beyond reproach.

Radical John Adams wanted the colonists to declare their independence immediately, in part because he knew diplomatic recognition of a new nation would add weight to its cause. Soon enough, French agents replied to American feelers by saying that yes, King Louis XVI would aid the rebels—under the table. On the cheap. A little bit. If the thirteen colonies declared independence, on the other hand, His Most Christian Majesty would happily and publicly lend his aid. Yet one year, two months, and nineteen days elapsed between the Battles of Lexington and Concord and promulgation of the Declaration of Independence. With the British government making war on colonists up and down the Atlantic coast of North America, the time lag requires some explanation.

There were several reasons why what seems to be the obvious course was not taken right away, despite the increasingly vociferous demands of radical congressmen like John Adams. First, North American colonists generally had been loyal Britons. In fact, they were never so patriotically British as in 1763, the year the French and Indian War ended. Britain emerged from that conflict as the greatest European power, and mighty France was reduced to runner-up in the contest for international power. Britons were freer than other Europeans, they were more prosperous, they were Protestant, and they were more powerful. The colonists considered themselves loyal subjects of the king. Why would anyone want to leave that situation?

As the chief beneficiaries of the victory of 1763, the colonists also had greater reason for contentment than anyone else in the Empire. Their colonial governmental systems, with local legislation mainly by colonial assemblies under a general system of legislation by Parliament, taxed them less than Englishmen were taxed, were more representative than the British government in the Home Islands, and did not even require them to pay a fair share of the cost of the mighty military establishment that had driven the French off the colonists’ continent. Yes, this same line of reasoning had led Parliament to endeavor, with the Stamp Act taxes of 1764–1775, to pass on some of the burden of maintaining troops to defend the colonies. Yet even if they had paid all the taxes Parliament enacted, the colonists still would have been paying only 10 percent of the cost of their own defense.

In short, being in the British Empire was a sweet deal for the colonies—and not only geostrategically. In the era of mercantilism, it was also highly advantageous economically. Great Britain had a huge colonial empire all over the world, and the general rule was that only people within the Empire could trade with any part of the Empire. The colonists’ chief market was a highly lucrative trade with Great Britain and her colonies in the Caribbean. Leaving the British Empire would mean disrupting long-standing business relationships, followed by an uncertain future. It would also mean the loss of protection by the powerful Royal Navy.

Perhaps equally importantly, although there were significant numbers of Germans in Pennsylvania and Dutchmen in New York, most white inhabitants of the colonies were British. This is why, even years after independence was declared, prominent revolutionaries such as New York’s John Jay and Virginia’s Edmund Pendleton could still think of the rupture as “unnatural.” The Declaration itself included a poignant paragraph drawing British attention to the fact that the colonists had repeatedly over many years appealed to their “British brethren,” their “common kindred,” to intercede with the British government on their behalf. Yet, Britons had proven “deaf to the voice of … consanguinity.” Only “necessity” impelled the colonists to declare independence in the face of this consideration.

Another reason independence was not declared before July 4, 1776, is that the colonists commonly understood their quarrel to be with Parliament, not with King George III. As Thomas Jefferson explained in “A Summary View of the Rights of British America” (1774), the colonists saw George III as their rightful king, with authority to exercise certain government powers on their behalf, but they thought the British Parliament was “foreign to our Constitution, and unacknowledged by our Laws.”

Although the power had been unused since the time of Queen Anne, the British Crown still had the option to use a veto to stymie Parliament’s initiatives to intervene in colonial governance. So the colonists devoted their attention to rousing George III to come to their aid. His failure to do so, they finally concluded, marked him as a tyrant. Ironically, from where George III sat, it would have been tyrannical for him to claim wide-ranging authority in North America over Parliament’s will. Britons found colonial calls for George III to intervene in the lawmaking process on colonists’ behalf very strange, even ridiculous. The idea that Parliament was the problem and the king the potential solution had long bedazzled the colonists, however.

Finally, and perhaps most obviously, fear held the colonists back. After all, by proclamation in August 1775, George III had declared participants in armed resistance to be rebels, and the prospect of all-out war with Britain was frightening. There seemed a very good likelihood that the colonists would lose a war with the world’s greatest power. In that event, Patriot leaders likely would all be hanged, and the colonies’ virtually republican political systems almost certainly would be transformed into something far less congenial.

On the other hand, they might win a war for independence. That prospect was frightening too. To win a war required an army. An army would have officers and, yet more worrisome, a victorious general. In Europe at that time—in the world at virtually any time—a victorious general and his officers seized power and took over the government. Britain’s monarchy and lords traced their origins directly to just such a sequence of events in 1066, and everyone knew it. No one knew that George Washington would be George Washington. It had been millennia since a man had been given ultimate executive authority and had given it back.

The last holdouts to declaring independence, the central colonies, came around only slowly. When Virginia’s Richard Henry Lee rose in the Second Continental Congress on June 7, 1776, to move that Congress declare “That these United Colonies are, and of right ought to be, free and independent States,” delegates from New York, Pennsylvania, Maryland, Delaware, and New Jersey had not yet been authorized to vote for independence. Thus, Congress voted to put off a decision on independence until early July.

Military affairs were urgent by the time Congress came to voting on July 2: A huge British naval force had assembled near New York City, and another flotilla approached South Carolina. Still, the New York delegation had to put off voting until it received new instructions. Twelve states voted for independence on July 2 (South Carolina did so only for the sake of unanimity), and New York’s congressmen added their state to the roster the next week.

Independence was no foregone conclusion on July 2, 1776. The American colonists only reluctantly embraced independence even after more than a year of war. They had close historical, cultural, economic, and political ties to Great Britain that were not easily broken. After a decade of perceived tyranny and war, they finally decided on a permanent split from their motherland. On that date, the Continental Congress formally passed Richard Henry’s Lee resolution for independence. On July 4, the Congress adopted the Declaration of Independence.

1. Colonists’ loyalty to the British Empire was especially high after which conflict?

2. Why was George Washington considered an exceptional choice for commander in chief of the Continental Army?

3. All the following were arguments for remaining in the British Empire except

4. Which of the following was true about the taxes Britain imposed on the colonies after 1763?

5. Which of the following best explains the colonists’ shift toward the Patriot cause?

6. If the Patriots achieved military victory over the British, what result was most widely feared?

7. Despite the importance of a unanimous vote for the Declaration of Independence, which region of the colonies took the most time in voting “aye” for the document?

“We must be unanimous; there must be no pulling different ways; we must hang together.”

“We hold these truths to be self-evident, that all men are created equal, that they are endowed by their Creator with certain unalienable Rights, that among these are Life, Liberty and the pursuit of Happiness. —That to secure these rights, Governments are instituted among Men, deriving their just powers from the consent of the governed, —That whenever any Form of Government becomes destructive of these ends, it is the Right of the People to alter or to abolish it, and to institute new Government, laying its foundation on such principles and organizing its powers in such form, as to them shall seem most likely to effect their Safety and Happiness.”

Refer to the excerpts provided.

1. Which of the following was a direct result of the sentiments expressed in the excerpt provided?

2. Which of the following political ideas influenced the ideas expressed in the excerpts provided?

“You inquire why so young a man as Mr. Jefferson was placed at the head of the Committee for preparing a Declaration of Independence, I answer . . .

Jefferson proposed to me to make the draught I said, ‘I will not.’ ‘You should do it.’ ‘Oh! No.’ ‘Why will you not? You ought to do it.’ ‘I will not.’ ‘Why?’ ‘Reasons enough.’ ‘What can be your reasons?’ ‘Reason first—you are a Virginian, and a Virginian ought to appear at the head of this business. Reason second—I am obnoxious, suspected, and unpopular. —You are very much otherwise. Reason third—you can write ten times better than I can.’ ‘Well,’ said Jefferson, ‘if you are decided, I will do as well as I can.’ ‘Very well. —When you have drawn it up, we will have a meeting.’”

John Adams in a letter to Timothy Pickering, 1822

3. Which of the following events unfolded due to reasons similar to those described in the excerpt provided?

4. Which of the following reflects the main idea about the events described in excerpt provided?