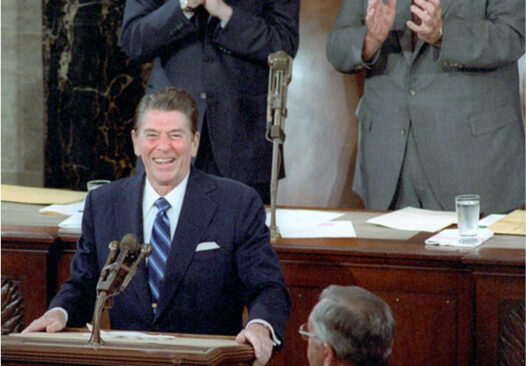 Use this narrative after students have read the introductory essay to introduce domestic milestones during Reagan’s presidency. This narrative can be used with The Space Shuttle Program and the Challenger Disaster Narrative; the Ronald Reagan, Address to the Nation on the Challenger Disaster, January 28, 1986 Primary Source; and the Herblock, Cartoons of Ronald Reagan, 1984-1987 Primary Source.

Supply-side economics, a policy advocating lower taxes and less government regulation of business, gained popularity during the 1970s, a decade in which the U.S. economy suffered from the chronic economic problem of stagflation. High unemployment, high inflation, and sluggish economic growth characterized stagflation, which worsened during the second half of the decade. During the campaign of 1976, Jimmy Carter had complained about the misery index: the combined rates of inflation and unemployment, which stood at more than 13 percent on Election Day. Four years later, when Carter sought a second term, the misery index had reached a painful 21 percent.

Stagflation arose from complex causes, including a surge in oil prices and a drop in the productivity of U.S. workers. As president, Carter tried to combat stagflation by calling for energy conservation, attempting to control federal spending, and deregulating the trucking and airline industries to encourage competition. On July 15, 1979, he gave a televised speech in which he claimed that there was a larger problem than stagflation, which he called a “crisis of confidence” that was eroding faith in government and in the future. Carter’s address about what many commentators called “the national malaise” failed, however, to alleviate popular discontent as the misery index continued to climb.

Conventional economic thinking suggested that high inflation and sluggish economic growth would not occur simultaneously. Keynesianism – the theories of British economist John Maynard Keynes – dominated economic thinking at the beginning of the 1970s and encouraged government to concentrate on regulating consumer demand through either tax and spending cuts or increases as the key to maintaining prosperity. The inability of Keynesianism to explain stagflation, much less alleviate it, opened the door for new ideas from supply siders, economists who concentrated on the supply side of the economy – businesses, investment, and labor – and believed that government should cut business taxes, reduce the marginal tax rates of wealthy individuals to encourage investment, and eliminate unnecessary regulations to stimulate economic growth. Among the academic experts who embraced supply-side thinking was Arthur Laffer of the University of Southern California. Laffer popularized the idea that tax cuts could increase government revenues or even pay for themselves, using a simple diagram known as the Laffer Curve.

A prominent advocate of supply-side economics was Rep. Jack Kemp (R-NY), who devised a plan to encourage economic growth through tax reductions. Along with Sen. William Roth (R-DE), Kemp introduced to Congress a proposal to cut personal tax rates by 30 percent over three years. During his presidential campaign in 1980, Ronald Reagan endorsed the Kemp-Roth proposal and embraced supply-side ideas. Reagan later explained in his memoirs that his support of tax cuts came from personal experience as a highly paid actor in Hollywood in the 1950s who had to pay a marginal tax rate on his earnings of 91 percent. He thought it was “common sense” to reduce taxes so people would have the incentive to work harder and fuel economic growth.

Once he became president, Reagan gave highest priority to implementing his economic program, known as Reaganomics. The president believed he could encourage strong economic growth, reduce inflation, increase defense spending, and balance the budget while cutting taxes and reducing social welfare programs. His ideas were unconventional in the early 1980s; Vice President George H. W. Bush, when campaigning in 1980 for the Republican presidential nomination, called Reagan’s ideas “voodoo economics.” Reagan overcame such skepticism and, in August 1981, signed into law the Economic Recovery Tax Act, which was a modified version of the Kemp-Roth proposal. It reduced personal income tax rates in three annual installments of 5, 10, and 10 percent; lowered the highest marginal tax rate on top earners from 70 to 50 percent; and cut corporate taxes.

What followed was recession rather than recovery. The main reason was a decision by the chair of the Federal Reserve Board, Paul Volcker, to squeeze inflation out of the economy. Under Volcker’s leadership, the Federal Reserve Board reduced the money supply, which drove up loan interest rates and made investment more difficult for businesses and credit harder to obtain for consumers. Volcker succeeded, but at considerable cost. Inflation plunged, but the economy fell into the worst recession since the Great Depression. Unemployment climbed to 10.8 percent; business failures reached the highest levels since the 1930s.

Recovery began in late 1982. It was the start of sustained economic growth that lasted for the remainder of the decade. The Gross National Product, a measure of the overall size of the economy, increased by 3.6 percent in 1983, by 6.8 percent in 1984, and by an average annual rate of 3.2 percent during Reagan’s second term. The New York Stock Market’s Dow-Jones Industrial Average grew by almost one-third in Reagan’s first term and by more than two-thirds in his second term. Improvements were slower on Main Street (i.e., among workers) than on Wall Street. The unemployment rate did not fall below 8 percent until 1984, nor below 6 percent until 1988. Still, Reagan could claim that his tax cuts had contributed to the rejuvenation of the economy. Indeed, the campaign slogan of his landslide reelection victory in 1984 was “It’s morning again in America.”

Improvements in the economy produced a celebration of wealth. Young urban professionals, or “yuppies,” attracted media attention because of their conspicuous consumption of designer clothes, gourmet foods, and luxury automobiles. A new television show, Lifestyles of the Rich and Famous, provided glimpses into the opulent lives of celebrities, with host Robin Leach wishing viewers “champagne dreams and caviar wishes.” Business leaders became folk heroes and celebrities. Donald J. Trump, for example, won national acclaim for touting how his mastery of the art of the deal enabled him to amass a fortune by renovating buildings in New York, building casinos in Atlantic City, and putting his name on those properties. Ivan Boesky became even wealthier by speculating in corporate mergers and acquisitions and then defended his acquisitive lifestyle by claiming that “greed is all right.” Boesky, however, proved himself wrong. He pleaded guilty to insider trading, served two years in prison, and paid a $100 million fine. Critics pointed to him as an example of 1980s excess.

Although the economy improved during Reagan’s final six years in office, there were two persistent problems. One was the federal deficit. Sustained economic growth did not offset Reagan’s tax cuts and concurrent spending increases. Although federal revenue surged from $599 billion in 1981 to $991 billion in 1989, Reagan’s defense buildup and inability to control federal spending on the welfare state meant the federal deficit swelled to record peacetime levels. Indeed, during his administration, the national debt increased by a larger amount than it had during all previous presidencies combined.

The second problem was growing wealth inequality. This trend began during the 1970s; it continued during the Reagan years and after. Between 1977 and 1989, the wealthiest 20 percent of Americans saw their pretax income increase by 29 percent, whereas the pretax income of the poorest shrank by 9 percent. Those in middle-income categories enjoyed only a modest increase. Between 1970 and 1995, the richest 1 percent of American households saw their share of the nation’s wealth increase from 20 to 40 percent. These trends reversed the pattern in the 1950s and 1960s, when the largest income growth had occurred among the poorest 40 percent of American households.

There have been many explanations for increasing wealth inequality but no agreement about its causes. Among the possibilities are the decline in the number of unionized workers, the shift from a manufacturing to a service economy, global competition, and tax cuts that have favored the affluent. Whatever the cause, the data suggest the United States has become “the most economically stratified of the industrial nations.”

The Reagan administration experimented with then-novel economic theories to solve what seemed to be the intractable problem of stagflation during the 1970s. Although its solutions were largely successful during the 1980s, long-term economic trends in the global economy led to several challenges in the early twenty-first century. Economists and national politicians still debate the causes of and solutions to those economic problems.

1. The misery index, as referred to in the presidential debates of 1976 and 1980, measured

2. The most important recommendation made by supply-side economists in the 1970s to spur economic growth was

3. Which economic goal did Reaganomics fail to achieve?

4. Keynesian economics most clearly rested on the premise that

5. Economist Arthur Laffer influenced economic policy during the Reagan years by mistakenly supporting the idea that

7. The federal deficits grew during the Reagan Administration, partly due to

Refer to the chart provided.

1. What was a direct result of the trend demonstrated in the chart during the last quarter of the twentieth century?

2. The trend that dominated the period shown in the chart was most directly shaped by

3. A historian might use this graph to support an argument for