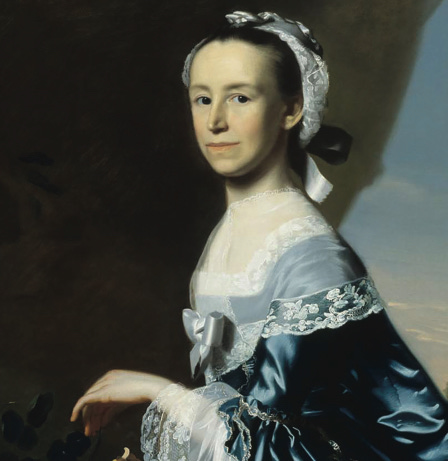 Use this Narrative with the Judith Sargent Murray, “On the Equality of the Sexes,” 1790 Primary Source and the Abigail Adams: “Remember the Ladies” Mini DBQ Lesson to allow students to discuss gender roles and expectations in the founding period.

Mercy Otis Warren belonged to a family of famous and powerful men in colonial Massachusetts. Her father was a judge, militia colonel, and political power broker. Her older brother, James Otis, was a fiery lawyer who rallied the initial Patriot challenges to new British taxes and commercial regulations during the 1760s. Her husband, James Warren, exercised great political clout and exhibited Patriot zeal for the cause of liberty. These family ties enabled Warren to befriend the ambitious young lawyer John Adams and his talented wife Abigail. Through visits and many letters, Warren helped the younger Abigail develop confidence in her own good judgment in politics as well as household management.

Wealth and connections brought Mercy Otis Warren close to power, but society denied her the respect and influence granted to men, for social conventions reserved civic life to men and domesticity to women. Although her husband and brothers graduated from Harvard, she was educated at home by a family tutor. Fortunately, her talents inspired that tutor to teach her far more than the household duties deemed appropriate for colonial girls. He introduced her to classical literature, ancient history, and political theory. Curious to know more, she read widely in the many books from the family library, cultivating a mind superior to nearly all others in Massachusetts. She also had the good fortune to marry someone thoughtful and loving who respected her intellect.

Committed to the cause of liberty, Warren resisted being excluded from the inner circle of Patriots and thought all men and women should be interested in public events. “As every domestic enjoyment depends on the decision of the mighty contest, who can be an unconcerned silent spectator?” she asked. Barred from serving in the legislature or the military, she nevertheless recognized that the Patriot movement depended on the power of words to persuade and inspire, so she cultivated influence through her talents as a writer. Patriot writers had to sway conservative colonists toward new convictions before they would make the political leap into the dangerous unknown by defying the British Empire. Through broadsides, pamphlets, plays, and newspaper essays, Patriot writers discredited British rule as corrupt. They also had to breed confidence in a brighter future of American autonomy and even independence. Almost all the Patriot writers were men, but few were as talented, productive, and influential as Mercy Otis Warren.

In a daring move for a time that insisted women had no place in the public world of print, Warren anonymously published in 1772 a mock epic that derided the royal governor and Massachusetts native Thomas Hutchinson as greedy and insidious, trading the liberties of his countrymen and women for British gold. In subsequent published poems and two plays, The Defeat(1773) and The Group(1775), she extended that critique to the conservative justices and council members in Hutchinson’s circle. Once war broke out, she went on to ridicule the allegedly misguided men and women who clung to British rule as an essential source of stability. She drew a hard and fast line between true Americans she praised as Patriots and those who dreaded revolutionary change, whom she demonized as traitors. Understanding the motivating power of words, Warren helped the Patriots build a mass movement.

During the early 1770s, Patriot politics increasingly moved beyond the formal politics of the colonial legislature, which the royal governors often frustrated by vetoes and dissolutions. As an alternative, Patriots created extra-legal committees, conventions, and meetings. Smaller groups of elite Patriots often hatched agendas in secret, beyond the surveillance of government informers. That shift provided another opportunity for Warren, who joined the covert planning sessions held by Patriots gathered in her home in Barnstable. Apparently, it was she who first suggested the creation of a network of committees of correspondence to link the top Patriot leaders with their counterparts in every town in Massachusetts – and ultimately beyond to the entire thirteen colonies. She also cultivated her own correspondence with John Adams, who valued her advice.

Despite her unusual accomplishments, Warren did not openly confront the conventions that limited women to a strictly domestic sphere. “Whatever delight we may have in the use of the pen, or however eager we may be in the pursuit of knowledge . . . yet heaven has so ordained the lot of female life that every literary attention, must give place to family avocations,” she advised a younger woman. Fearing public ridicule for overstepping her bounds, she published her early works anonymously. Patriot men encouraged her political writing, not as any challenge to social rules, but from a desperate need for her special literary talents for political persuasion. Warren worked within traditional gender norms, stretching, but not breaking, them.

The Patriots won American independence, but after the war they were divided about how best to consolidate a stable yet republican government. Worried about post-war anarchy, most nationalist leaders, including John Adams, favored a stronger federal Constitution, written in 1787 and ratified by state conventions in 1788. Warren and her husband, however, regarded the Constitution as a betrayal of the Revolution, a power grab by elitists. She was loath, Warren explained, “to relinquish . . . the rights of man for the dignity of government.” Returning to print, she published an Anti-Federalist pamphlet in early 1788.

Politics strained the friendship between the Warrens and the Adams and ruined James Warren’s political career. At that point, Warren turned to writing history. She published her masterwork, the three-volume History of the Rise, Progress and Termination of the American Revolution, in 1805. Newly confident in her authority, she did so under her own name, becoming the first U.S. woman to produce a history, a genre considered far more substantial than poems, plays, and novels. Although it was a rousing celebration of the Patriots, Warren’s work also settled scores with the Federalists, whom she accused of compromising on liberty. In particular, she accused John Adams of “partiality in favor of monarchic government.” Feeling betrayed, the hypersensitive Adams responded with bitter misogyny, “History is not the Province of the Ladies.” Warren reacted in the press with dignity and dismay, assuring Adams that it “was not the design of my historic work to write a panegyric[a tribute] on your life and character.” She would never accept “the assertion that all political attentions lay out of the road of female life.” In 1811 Abigail Adams made peace with Warren, but John Adams offered only a tense armistice.

Mercy Otis Warren never openly pushed for greater legal and political rights for women. But she was hardly alone in her restraint. Instead, like Abigail Adams and Judith Sargent Murray (a contemporary and an advocate for women’s rights), Warren sought public respect for women to venture their opinions in print. She, Murray, and Abigail Adams advanced the concept of “Republican Motherhood,” which held that women played a key role in educating their sons to become active citizens. In a letter, Warren assured one young woman, “Let us by no means acknowledge such an inferiority as would check the ardour of our endeavours to equal in all mental accomplishments the most masculine heights.” She spoke of gender differences as “temporary distinctions” that would give way to true equality in America.

1. Mercy Otis Warren’s family and friends did not include

4. After the Revolution, Mercy Otis Warren was known for her critique of

5. Warren and her contemporaries advanced the idea of Republican Motherhood because

6. Warren’s accomplishments do not include which of the following?

What did Mercy Otis Warren do to overcome the limits on her influence?

Explain how Mercy Otis Warren sought to advance the ideals of the American Revolution.

“Even some Americans who have fought for their country and been instrumental in her emancipation from a foreign yoke, seem to be at war with every Democratic principle:and some men of genius, professed republicans, who formerly shared the confidence of the people, are now become the advocates for Monarchy and all the trappings of Royalty.”

1. Which of the following best describes the major characteristics of American politics in the 1790s?

2. What does this passage reveal about the side Warren took in the political debates of the 1790s?

“2. There is no security in the system [under the proposed new U.S. Constitution], either for the rights of [people with different ideas] or the liberty of the Press. . . .

4. The Executive and the Legislative are so dangerously [combined] . . . that [it should cause people to be alarmed]. . . .

9. There is no [system] for [making sure that power does not stay] in the same hands for life.”

This excerpt is from “Observations on the New Constitution and on the Federal and State Conventions,” by Mercy Otis Warren. It originally appeared as a newspaper article in the spring of 1788.

3. Which of the following groups would agree with Warren’s excerpt?

4. The sentiments expressed in the excerpt provided contributed to which of the following events?
5. What outside information would a historian use to contextualize the sentiment in this document?