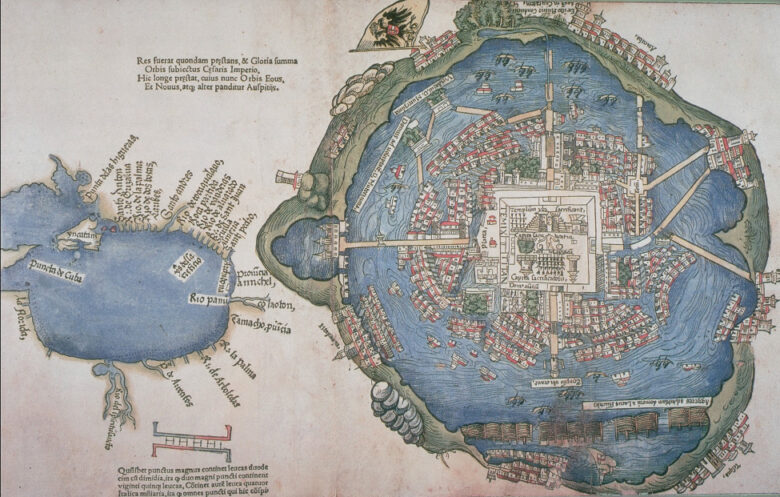 This Narrative should be assigned to students after the First Contacts Narrative. Connections can be drawn between this Narrative and the Las Casas on the Destruction of the Indies, 1552 Primary Source.

Upon their arrival in the New World, Spaniards constructed their colonies and cities upon or alongside established Native American communities such as the Aztec capital of Tenochtitlan, on the site that later became Mexico City. To establish political and economic control over their new colonies, the Spaniards created two “republics”: the República de Españoles and the República de Indios. They and their enslaved Africans (and even free Africans) were in the first, and Native Americans were in the second. Although both republics fell under the purview of Spanish law, they operated semi-autonomously, with each established town having its own town council. For example, Mexico City had both a Spanish and a Native American town council.

As subjects of Spain, Native Americans had various daily responsibilities. As Christians, they were to attend services and send their children to daily catechism classes. They also paid various religious fees and taxes designed to support the Church in the Spanish colonies. Local priests and officers of the Inquisition (a Roman Catholic tribunal established to investigate and suppress heresy) maintained spiritual order and orthodoxy among all inhabitants of the colonies. In addition, Native Americans had labor and tribute quotas to fill. Such duties provided many opportunities for confrontation and discontent, and the local Native American elite adjudicated many such situations through the town council. Indeed, the archives are full of petitions by Native American councils against corrupt priests and Spanish officials and complaints against excessive tribute quotas. Yet the council likewise mediated local affairs, including land disputes, bills of sale, and the filling of town positions. It even meted out punishments for wrongdoing. In many ways, the town councils in the República de Indios allowed Native Americans to continue governing Native Americans.

To govern and tax the Native Americans in the early decades of colonization, the Spanish relied on the encomienda, a grant of native labor and tribute given to Spanish conquistadors and settlers. Abuse and distrust of the system led to its gradual and sometimes incomplete phasing out, with control over Native American tribute and labor reverting to the crown, which tried to control corrupt colonial officials.

Tribute varied according to region and era but included mainly goods Spaniards could ship back to Spain for profit or sell on the local or regional market. Products presented as tribute included maize from Culhuacan, silk from the Mixteca Alta region, honey from Yucatan, pearls from the Caribbean, gold from Columbia, and even cattle from Argentina. After the initial years of colonization, Spaniards in central Mexico organized Native American labor around the repartimiento, or “allotment,” system. The repartimiento required those between the ages of eighteen and fifty years to give service in a variety of projects, from laboring in a Spaniard’s field to participating in large construction projects. The Native Americans were to receive payment for their labors, but it was often insufficient or withheld. In South America, labor was organized through the mita, an Incan system in which adult Native Americans were drafted for extended periods. For example, the silver mines of Potosí required the labor of thousands of Andean laborers, who were drafted from towns hundreds of miles away and required to serve one year of every seven. Eventually, the decline in the Native American population and difficulties with the forced-labor system led to the development of wage labor.

Although Native American tribute and labor served as the linchpin of colonial society, Africans also contributed to the daily life of the Spanish colonies. In general, Spaniards employed native labor whenever possible. However, where the supply was insufficient, they purchased African slaves to work in the more profitable industries such as mining and sugar. For example, after the decimation of the native population in the Caribbean, Spaniards brought thousands of enslaved people from West Africa to work the islands’ sugarcane fields. This drastically altered the Caribbean’s population demographics. Not all enslaved Africans worked in the mines or sugar plantations. In the cities and large towns, they were rented out and served in other domestic roles, including as wet nurses and maids. Africans also learned the skilled trades of their owners and became proficient tailors, blacksmiths, and artisans.

Because Spanish law allowed an enslaved person to purchase his or her own freedom, Spain’s colonies boasted a sizeable portion of free blacks who engaged in myriad trades; freed slaves became sailors, merchants, and even slave owners. Many joined militias and defended thousands of miles of coastline along the Spanish colonies against pirates – another common element of life in the colonies. They served in return for a salary, social advancement, and tax exemption. Moreover, free Africans formed their own Catholic brotherhoods – common among Spaniards and Native Americans – that supported an African-Christian worldview while providing monetary support for members by funding funerals and celebrations and even serving as banks.

Spanish cities and the activities within them modeled those found in Europe. Like their counterparts in Spain, the capitals of Mexico City and Lima housed universities, cathedrals, exquisite homes, central courthouses, and exclusive shopping. Cards, music, books, plays, bullfights, and parties occupied the time of the elite. Poorer citizens also partook in such activities but on a smaller scale, enjoying local ballads, cockfights, and town gatherings on feast days. The elite dined on wheat bread, olive oil, cured meats, and wine, while commoners ate maize tortillas, manioc, chilies, turkeys, and small dogs, and drank the local indigenous intoxicant. Cities boasted the most refinement and Spanish influence, whereas the countryside was denigrated for its overwhelming “Indian” feel.

Throughout the colonial period, sexual relations between different people from the Americas, Europe, and Africa created a growing mixed-race population known as the castas. Disregarded as a minor inconvenience at first, the castas eventually threatened the social hierarchy. The Spanish sought to maintain themselves at the top and keep Native Americans and Africans at the bottom, whereas the castas were allowed a place somewhere in the middle. In daily life, however, people were often racially categorized by how well they spoke Spanish, how they dressed, what food they ate, or their social circle of acquaintances. As a result, in practice, the hierarchy allowed for some flexibility.

Perhaps this flexibility best reflects life in the Spanish colonies. It consisted of specific obligations, religious institutions, and social hierarchies, to be sure. Yet Native Americans, Africans, and Spaniards negotiated their own experiences, from conformity to resistance, within these limits. Most lived somewhere between the two extremes, doing their best to adapt their traditional ways of life to a diverse colonial world.

1. Why did the Spanish build their colonies alongside Native American communities such as the Tenochtitlan?

2. Under Spanish law, Native Americans were required to

3. The Native Americans were required to submit to Spanish law, but

4. The main purpose of the encomienda system was to

5. In practice, the encomienda system created a

6. A result of the Native Americans’ susceptibility to European disease was

7. The Spanish law permitting a slave to purchase freedom allowed for

8. In practice, the castas system was

9. The social hierarchy created by Spanish settlers and Native American people resulted in

1. The image provided most likely represents

2. The image provided most likely represents

3. The Native Americans in this image were most likely

4. The main purpose of the system depicted in this image was to

Schwartz, Stuart B. Victors and Vanquished: Spanish and Nahua Views of the Conquest of Mexico. Boston: Bedford, 2000.