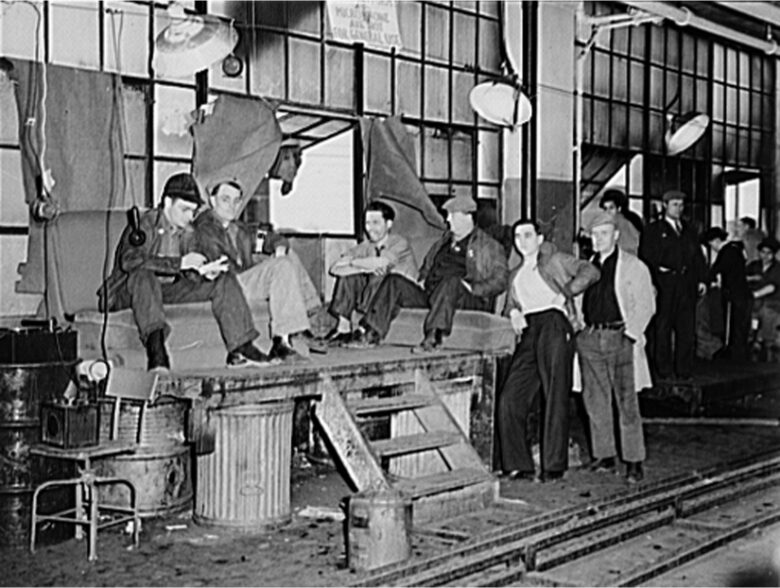 Use this narrative to discuss the rise of the Committee on Industrial Organization and unionization within the United States during the New Deal.

The Great Depression had left millions of Americans without work, income, or housing. The unemployed demanded jobs; young workers, women as well as men, rode the rails or hitchhiked across the land desperate for work. They joined mass marches and protests and fought against the eviction of those who fell behind in their rent. Those unable or unwilling to take to the road lined up at soup kitchens, found rough shelter in urban shantytowns derisively named “Hoovervilles,” or sold apples on street corners. During the presidential election of 1932, the Democratic Party candidate, Franklin Delano Roosevelt, promised voters “a new deal,” one that would put them back to work and offer them security.

Even before Roosevelt took office, his election stirred workers to action. They rejoined labor unions that had atrophied during the previous prosperity decade, especially in the coal mining and clothing industries. There, the United Mine Workers of America (UMWA), the International Ladies’ Garment Workers’ Union (ILGWU), and the Amalgamated Clothing Workers of America (ACWA) acted aggressively to better working conditions. By the time the New Deal enacted its first major piece of labor reform, Section 7(a) of the National Industrial Recovery Act (NIRA), which protected workers’ rights to join unions and bargain collectively, the UMWA had reorganized much of West Virginia and the remainder of the Southern Appalachian coal fields.

When the NIRA and Section 7a guaranteed workers the right to join unions and bargain collectively with their employers, union membership surged. This occurred not only in sectors that had once been union strongholds, such as coal mining and clothing, but also increasingly in industries that had been bastions of the open shop (i.e., where workers did not have to join the union), such as steel, automobiles, and electrical goods. A strike wave swept across the nation in 1933-1934: there were 1,700 strikes in 1933 and 1,856 in 1934. In the summer of 1934, citywide general strikes paralyzed Toledo, Ohio, in June and San Francisco and Minneapolis in July. Strikers and their supporters fought with police and National Guard troops, suffering injuries and even deaths during these urban battles. The strikes succeeded in winning higher wages and union recognition despite neglect by the established labor movement, which was dominated by the American Federation of Labor (AFL) and its focus on skilled workers in particular crafts. Instead, leftists and radicals led the citywide strikes. In the mass-production sector, where AFL leaders and organizers acted hesitantly, the union upsurge in steel, autos, rubber, and electrical goods collapsed without support.

Success in unionizing the coal mining and clothing industries, however, led the leaders of those unions, John L. Lewis, Sidney Hillman, and David Dubinsky, to believe that despite the failures of 1934, workers in the mass-production sector might still be unionized. The upheaval of 1934 led New Dealers to realize that more reform was needed to quell worker discontent and lift the nation out of the Depression. Moreover, the Supreme Court had declared the NIRA to be unconstitutional in Schechter v. United States. (1935). Thus, more-radical New Dealers in Congress, led by Senator Robert Wagner of New York, drafted legislation that put the power of the national government firmly behind the right of workers to unionize and bargain collectively with their employers. What became the National Labor Relations or Wagner Act passed Congress in 1935. It guaranteed workers the right to unionize despite employer hostility; banned specified employer anti-union tactics, including company unions; placed no restrictions on the right to strike; and required employers to bargain in good faith with unions of their employees’ own choice. It also created a National Labor Relations Board to enforce the law.

Lewis, Hillman, and Dubinsky sensed that now was the time for labor to act, for the AFL to seize the day. Before the New Deal, Lewis had seemed the most conventional of labor leaders, a typical union boss, even a tyrant who brooked no opposition within his own union, and a Republican and Herbert Hoover loyalist. Hillman and Dubinsky brought a different tradition to the struggle. Immigrants from the Russian Empire, both had been members of the socialist left as young men in Russia and at first remained socialists in their adopted homeland, leading socialist unions. The New Deal changed the politics and assumptions of all three. By 1934-1935, all had become New Deal enthusiasts and firm Roosevelt loyalists. Led by Lewis, they demanded that the AFL act aggressively to organize workers in mass production. Instead of worrying about which existing unions should have jurisdiction over new members, Lewis said unionize first and decide jurisdiction later. When the AFL, at its 1935 national convention, refused to approve an aggressive organizing campaign in the mass-production sector, Lewis led a walkout of delegates committed to unionizing workers in those industries.

That November, Lewis, Hillman, and Dubinsky, together with nine other like-minded union leaders, formed the Committee on Industrial Organization (CIO) within the AFL, to fight for the organization of mass-production workers on an industrial (rather than craft) basis. “CIO started as a new kind of labor movement,” remembered Len DeCaux, its publicist, “a challenge to the old AFL and the status quo it complacently guarded. It was new in its youth and fervor, new in the broad sector of the working class it brought into action, new in the way it accepted and integrated its radicals . . . new in its many social and political attitudes.”

Lewis dispatched organizers into the field to enroll steel workers, automobile assemblers, tire builders, meatpackers, and other mass-production workers into new CIO unions. Equally important, he and Hillman put the resources of their own unions and the nascent CIO fully behind Roosevelt’s reelection campaign. When the president and the Democratic Party won a landslide victory in November 1936, it served as a mandate for the CIO to act decisively. On December 30, 1936, workers at a General Motors’ assembly plant in Flint, Michigan, stopped work, remained inside, and used the sit-down strike tactic to bring General Motors to the bargaining table. For almost six weeks, the Flint workers remained inside the plants, refusing to relinquish control to the company, while Roosevelt and Governor Frank P. Murphy of Michigan pressured General Motors to negotiate with Lewis. Finally, on February 11, 1937, the company agreed to recognize the United Automobile Workers CIO as the bargaining agent for its members and signed an agreement with the union. The sit-downers marched out of the plant carrying a large American flag and proclaiming victory.

Less than three weeks later, U.S. Steel recognized the Steelworkers Organizing Committee CIO (SWOC) as the bargaining agent for its members and signed a contract with Lewis. Lewis and the CIO had opened a breach in mass production’s open-shop fortresses and accomplished what the AFL had failed to achieve in more than 50 years. Lewis became the nation’s most powerful and feared labor leader and the CIO a potent force. Workers flocked into CIO affiliates in meatpacking, electrical goods, rubber, and maritime trades. By mid-summer 1937, the CIO had grown rapidly. By accepting all workers when organizing an entire industry, including women, African Americans, and immigrants from eastern and southern Europe and their children, the CIO welcomed a variety and unskilled and semiskilled workers the AFL had often neglected. Even poorly paid, young, female sales clerks at Woolworth’s used the sit-down tactic to demand better conditions. Benjamin Stolberg, a noted labor journalist, wrote, “the C.I.O. has changed significantly the relation of social forces in American industry. . . . It is gradually killing off the A.F. of L.” Lewis’s extraordinary leadership, he added, had made the CIO “the most vital and progressive force in American life today.”

For a time, however, the CIO’s momentum stalled. A deep economic recession that began in the fall of 1937 crippled the mass-production sector where the CIO’s strength was concentrated. Union members lost work and fell behind in dues payments, sit-down strikes were unpopular with the public, and CIO unions atrophied. In the meantime, the AFL had learned from the CIO that workers neglected until now could be unionized. The AFL organized aggressively, adding members in economic sectors untouched by the CIO and in regions of the nation with little CIO presence. In 1938, the CIO renamed itself the Congress of Industrial Organizations and became a separate organization independent of the AFL. By the end of 1938, the labor movement, though split into two warring federations, claimed more members and more power than ever before in U.S. history.

When war erupted in Europe in August 1939 and spread globally, entangling the United States after the Japanese attacked Pearl Harbor on December 7, 1941, the CIO experienced an extraordinary resurgence. Companies that had successfully fought CIO unions, such as Ford Motors, Swift Meatpacking, Westinghouse Electric, and the so-called Little Steel Companies, now recognized the unions. The federal government created a National War Labor Board that promoted and protected unions during the war years, helping CIO unions in the mass-production sector build a mass membership. Although Lewis and Roosevelt split during the presidential election of 1940, Roosevelt turned to the CIO’s Sidney Hillman as his primary labor intermediary during the war years. When war ended in 1945, unionism was securely established in the mass-production sector, more than 13 million workers belonged to unions, and nearly one-third of civilian, nonagricultural workers claimed membership in a union. Federal government protections and the actions of workers contributed to the zenith of the organized labor movement in the years after World War II.

2. The 1935 National Labor Relations Act or Wagner Act did all the following except

3. The Congress of Industrial Organizations (CIO) sought to organize workers in

4. The CIO challenged the organizing philosophy of the American Federation of Labor (AFL) because the CIO

6. The formidable founder and head of the Congress of Industrial Organizations was

7. A major result of the competition between the American Federation of Labor and the Congress of Industrial Organizations in the late 1930s was the recession of 1937-1938

8. The passage of the National Industrial Recovery Act and the National Labor Relations Act or Wagner Act during the Great Depression led to

1. The actions in this image were most directly shaped by

2. What group would most likely support the position depicted in the photograph?

3. A historian might best use this photograph to support the claim that

Lichtenstein, Nelson. The Most Dangerous Man in Detroit: Walter Reuther and the Fate of American Labor. New York: Basic Books, 1995.