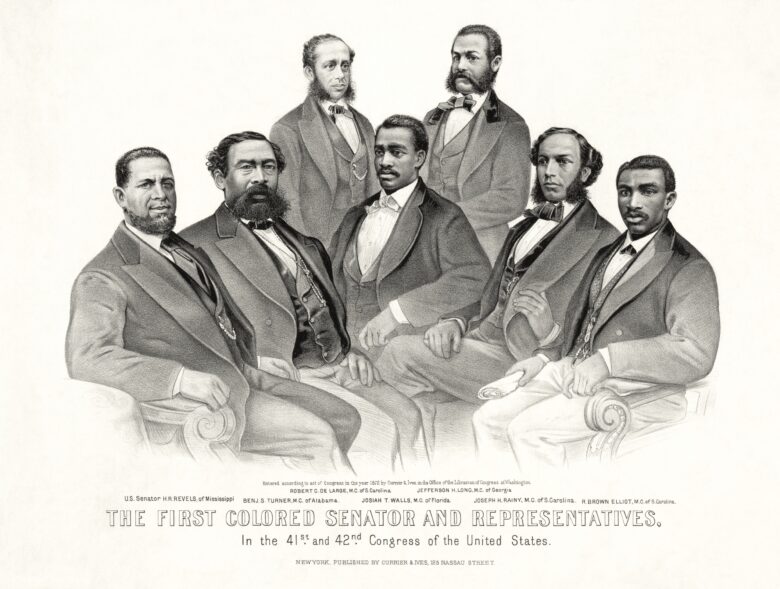 To what extent did Founding principles of liberty, equality, and justice become a reality for African Americans from Reconstruction to the end of the nineteenth century?

After more than two centuries, race-based chattel slavery was abolished during the Civil War. The long struggle for emancipation finally ended thanks to constitutional reform and the joint efforts of Black and white Americans fighting for Black freedom. The next 30 years, however, were a constant struggle to preserve the freedom achieved through emancipation and to ensure for Blacks the equality and justice of U.S. citizens in the face of opposition, violence, and various forms of discrimination.

The Civil War created conditions for the demise of slavery. Early in the war, Congress passed two Confiscation Acts that allowed the federal government to seize and later free enslaved persons in conquered Confederate territory. On January 1, 1863, President Abraham Lincoln used his wartime executive powers to issue the Emancipation Proclamation. Enslaved persons ran away from their owners and joined free Blacks enlisting in the Union Army to fight for freedom and human equality. The 54th Massachusetts Regiment was the most famous Black unit to fight in the war, but almost 200,000 Black soldiers fought for the Union. Black abolitionists joined the cause, with Harriet Tubman joining Union raids that helped liberate enslaved persons and Frederick Douglass recruiting Black troops. By the end of 1865, the requisite number of states had ratified the Thirteenth Amendment to confirm the end of slavery.

Slavery may have been banned, but Black Americans faced an uncertain future during the process of restoring the Union, called Reconstruction. The Civil Rights Act of 1866 protected basic rights of citizenship, and the Fourteenth Amendment (1868) provided for Black U.S. citizenship and equal protection under the law. Congress established the Freedmen’s Bureau as a federal agency in order to give practical help to freed people in the form of immediate aid and economic and educational opportunities. The efforts of the Freedmen’s Bureau to grant Blacks confiscated land and open Black schools in the South were frustrated by President Andrew Johnson’s vetoes of the Bureau bill and by the opposition of white supremacists.

Johnson succeeded Lincoln, and while he supported the restoration of the national union, he impeded the protection of equal rights for Black Americans. He vetoed numerous laws intended to promote Black equality, including the Civil Rights Act of 1866, the extension of the Freedmen’s Bureau, the Reconstruction Acts, and the Tenure of Office Act, among several others. While Congress overrode most of his vetoes, Johnson proved himself a consistent opponent of Black rights. In his third annual message in December 1867, he asserted, “Negroes have shown less capacity for government than any other race of people. No independent government of any form has ever been successful in their hands.” When he fired Secretary of War Edwin Stanton for resisting his policies, Congress impeached President Johnson, but the vote to remove him from office failed by one vote.

Initial protections for Blacks were also weakened by restrictions and opposition to equal civil rights. The new constitutions of former Confederate states did not protect Black citizenship or suffrage. Indeed, the states passed Black Codes that severely curtailed the legal and economic rights of Black citizens. Moreover, the codes penalized Blacks unfairly for committing the same crimes as whites.

Black Americans were also the victims of horrific violence perpetrated by white mobs and local authorities. White supremacists killed thousands of Blacks to intimidate them, prevent them from voting, and stop them from exercising their rights. The Ku Klux Klan and other groups such as the White League were organized to terrorize Blacks and keep them in a constant state of fear. The Colfax Massacre of 1873 and mass killings in places like Memphis and New Orleans were only a few examples of the wave of violence Black Americans suffered. Black and white leaders wrote to state and national officials about the violence in their communities. Congress, with the support of President Ulysses S. Grant, passed several acts aimed at protecting freed people from politically motivated violence. Such enforcement legislation was quickly challenged in the courts, and the withdrawal of all federal troops from the South in 1876 effectively ended federal intervention on behalf of the rights of freed people.

In 1870, the passage of the Fifteenth Amendment protected the right of Black male suffrage when it banned states from denying voting rights on the basis of “race, color, or previous condition of servitude.” Despite violence and intimidation, Blacks exercised their right to vote and served in local offices, state legislatures, and Congress. During Reconstruction, 14 African Americans served in the House of Representatives and 2 in the Senate. Nine of these leaders had been born enslaved. Local governments, however, increasingly found ways to subvert the exercise of the constitutional right to vote. Grandfather clauses, poll taxes, and literacy tests were applied to prevent Blacks from voting.

Many southern Blacks were farmers who lived under the crushing economic burdens of the sharecropping system, which forced them into a state of peonage in which they had little control over their economic destinies. In this system, white landowners rented land, tools, seed, livestock, and housing to laborers in exchange for a significant portion of the crop. As a result, Blacks barely earned a living and suffered perpetual debt that limited their economic prospects for the future.

In the later decades of the nineteenth century, Blacks also lived under confining social constraints that effectively made them second-class citizens. Segregation laws legally separated the races in public facilities, including trains, schools, churches, and hotels. These “Jim Crow” laws humiliated Blacks with a public badge of inferiority. Black members of Congress Robert B. Elliott and James T. Rapier made eloquent speeches in support of legislation to protect African Americans’ civil rights. Congress passed a Civil Rights Act in 1875 that protected equal access to public facilities, but the Supreme Court declared it unconstitutional in the Civil Rights Cases (1883), arguing that while states could not engage in discriminatory actions, the law incorrectly tried to regulate private acts. Frederick Douglass called the decision an “utter and flagrant disregard of the objects and intentions of the National legislature by which it was enacted, and of the rights plainly secured by the Constitution.” In 1896, however, the Court ruled in Plessy v. Ferguson that segregation laws were constitutional if local and state governments provided Blacks with “separate but equal” facilities. Separate was never equal, particularly in the eyes of Black Americans.

Watch this BRI Homework Help video for a review of the Plessy v. Ferguson case.

Blacks endured escalating violence in the Jim Crow era of the 1890s. White mobs of the time lynched more than 100 Blacks a year. Lynching was summary execution by angry mobs in which the victim was tortured and killed and the body mutilated. Ida B. Wells was a courageous Black journalist who cataloged the horrors of almost 250 lynchings in two pamphlets, A Red Record: Lynchings in the United States and Southern Horrors: Lynch Law in All Its Phases. Despite her efforts, lynching of Black Americans continued into the twentieth century.

Black leaders and intellectuals like Wells, Douglass, Booker T. Washington, and W. E. B. Du Bois advocated for education as the means to achieve advancement and equality. Black newspapers and citizens’ groups supported their communities and fought back against segregation and racism. Though their strategies differed, their goal was the same: a fuller realization of the Founding principles of equality and justice for all.

W. E. B. Du Bois summed up the Black experience after the Civil War when he stated, “The slave went free, stood a brief moment in the sun; and then moved back again toward slavery.” Du Bois points to the fact that whatever constitutional amendments were intended to protect the natural and civil rights of Blacks, and however determined Blacks were to fight to preserve those rights, they struggled to overcome the numerous legal, political, economic, and social obstacles that white supremacists erected to keep them in a subordinate position. Slavery had distorted republicanism and American ideals before the Civil War, and segregation continued to undermine republican government and equal rights after the conflict had ended.