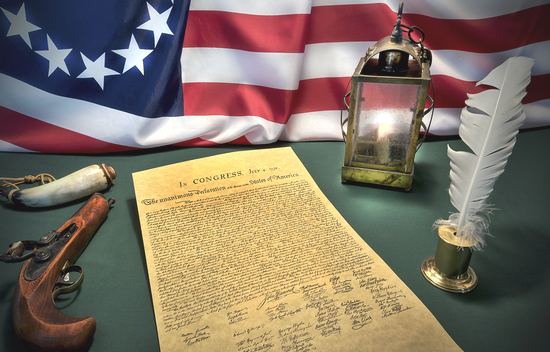 In the aftermath of the Seven Years’ War (1756–1763), the British government enacted a series of new laws, including new taxes, to be applied to its colonies in North America. Because the colonists had no direct representation in the British government, many protested the legality of these laws. They then began a serious public conversation about the nature and origin of their rights. Many believed that rights are grounded in nature—that is, in human nature, or natural law—and are therefore applicable to all humankind and higher than any laws made by human authority. The idea that rights derive from human nature has deep roots in western political thinking and was embraced by many thinkers of the Enlightenment, particularly the English political philosopher John Locke. This view of natural rights was invoked by the North American colonists as they explained and justified their revolution against British rule in the Declaration of Independence. In this way, the Declaration of Independence did much more than formally announce the colonists’ separation from Great Britain: it was also a tightly compressed philosophical argument that clearly articulated equality as the fundamental moral fact of human nature. According to the Declaration, this inherent equality, along with natural rights, formed the basis and limits of a just government. The principles of equality, liberty, and justice served as the foundation of the new nation and are therefore referred to as Founding principles.

John Locke’s ideas and writings, particularly “Two Treatises of Government” (1689), greatly influenced the Founding generation. Locke believed that the control of any person against his or her will was unacceptable, whether in the form of an unfair government or slavery. He wrote, “The state of nature has a law of nature to govern it, which obliges [treats] every one [equally]: and reason, which is that law, teaches all mankind . . . that being all equal and independent, no one ought to harm another in his life, health, liberty, or possessions.”

At the time, these principles were not faithfully applied to all people. Slavery existed throughout the 13 colonies in stark violation of liberty, equality, consent, and justice. Yet, the promise of these ideals inspired African Americans to take significant actions for their own liberties. Thousands of enslaved men and women ran away to the British side during the war because of an offer of freedom, and many served the British as soldiers or in other wartime roles. After some debate by Congress and General George Washington to allow them to serve, almost 5,000 black Americans fought for the Continental Army. Enslaved persons also petitioned colonial and state legislatures for freedom and initiated lawsuits called “freedom suits” in state courts and often won. Slavery’s existence also pricked at the conscience of many white Founders and citizens. Many individual slaveholders in the North and South privately manumitted or freed approximately 70,000 enslaved persons through 1810. Several northern states abolished slavery outright or gradually over the next few decades. Despite these actions, slavery was still entrenched in many parts of the new union, and thousands of men and women remained enslaved.

The use of enslaved person instead of slave stresses the humanity of African Americans who were held in bondage rather than their condition. The use of enslaved person is a modern convention. The term slave where it appears in historical documents has been retained in its original usage in order to present sources accurately in their historical context.

The attachment to slavery remained especially strong in states in the lower South—the Carolinas and Georgia. It endured there as a matter of state law and spread to new southern states such as Kentucky and Tennessee. This posed a vexing problem for the Framers of the U.S. Constitution: it became apparent that a constitutional union among the 13 former colonies would be impossible without significant concessions or compromises to states whose economies relied upon slavery. These concessions included the Three-Fifths clause, the international slave trade clause, and the Fugitive Slave clause. At the same time, the Constitution never uses the words race, color, or slavery—indicating, by James Madison’s testimony, the Framers’ judgment that it was “wrong to admit in the Constitution the idea that there could be property in men”—but also ensuring that the contest over slavery would persist. By referring to slavery in the Constitution indirectly, the Framers left the door open to challenge slavery in the future. The tension between American Founding principles and slavery’s denial of natural rights to millions of enslaved men and women troubled many in the early years of the republic. Cries to rectify or resolve this hypocrisy would only intensify in the years leading up to the Civil War.