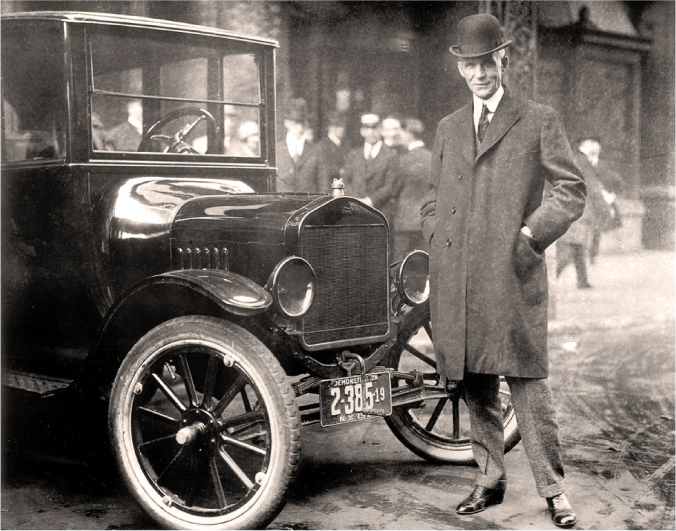 Use this Narrative at the beginning of Chapter 11 to introduce students to how new technologies and manufacturing techniques allowed for the increased production and consumption of consumer goods.

The gasoline-powered, internal-combustion automobile revolutionized human life: It brought people together. It made trade and commerce far easier. It connected cities to growing suburbs. It helped rural Americans travel to towns. It gave young people more independence. It helped stimulate the development of the factory assembly line. It revolutionized the American economy and society.

And Henry Ford revolutionized the automobile. Companies had made cars before Henry Ford; 502 auto companies were founded between 1900 and 1908. But early automobiles were expensive, difficult to drive, and hard to maintain, and the roads on which they were driven were primitive. Owning a car was barely better than owning a horse. Michigan’s Ford, a born tinkerer, had a better idea. Actually, he had a vision. “I will build a motor car for the great multitude,” he proclaimed. “It will be large enough for the family but small enough for the individual to run and care for. It will be constructed of the best materials, by the best men to be hired, after the simplest designs that modern engineering can devise. But it will be so low in price that no man making a good salary will be unable to own one and enjoy with his family the blessing of hours of pleasure in God’s great open spaces.”

That is easy to say. But how would Ford – often derided as “Crazy Henry” Ford – accomplish his goal after failing at several early attempts at car making?

He did it by embracing mass production and standardizing the parts in each car. Those ideas were not exactly new even then. Eli Whitney, the inventor of the cotton gin, had introduced standardized parts in firearms manufacturing back in the early 1800s. But Henry Ford built massive factories with assembly lines to manufacture cars for the entire American population. He also standardized the tasks needed to assemble cars. “The man who places a part does not fasten it,” he explained “The man who puts in a bolt does not put on the nut; the man who puts on the nut does not tighten it.”

Ford’s ideas succeeded beyond his wildest dreams. The Ford Motor Company’s manufacturing methods allowed it to cut the price of automobiles dramatically, and because more Americans could now afford a car, sales skyrocketed and Ford soon dominated the industry.

When Ford Motor started operations, it required 13 man-hours to assembly a vehicle. Henry Ford drove that down to a mere 93 minutes. As a competitor noted:

Ford introduced his most successful car, the famous “Model T,” in September 1908. By the time the last Model T rolled off the assembly line in May 1927, a phenomenal 15 million of them had been sold. In 1918, a farmer’s wife near Rome, Georgia, wrote to Ford: “You know, Henry, your car lifted us out of the mud, it brought joy into our lives. We loved every rattle in its bones. . . .”.

Efficiency had its cost in human terms, however. Ford’s repetitive assembly-line system ground his workers down, and high turnover became a problem. To solve it, in 1914, Ford doubled his workers’ pay rate to an unheard-of $5 per day, causing workers to flock to his factories. The high wages also startled the world and at the same time made it possible for Ford’s employees to purchase their own Model Ts.

But the same free market that contributed to Ford’s success allowed other industrialists to challenge his prominence. Ford had dominated his competitors, but he never eliminated them. His most important competitor was the highly innovative General Motors.

Durant was twice forced out of his company. Eventually, control passed to Alfred P. Sloan Jr., who had gained success and wealth by supplying roller bearings to the auto industry. Sloan was ready to make changes to car manufacturing and sales that Ford would not. Ford forced other shareholders out of his company and decided he knew what was best for consumers, famously saying that “Any customer can have a car painted any color that he wants so long as it is black.” (He had discovered that black paint dried the most quickly on his assembly lines.) To Henry Ford, time was money, and money saved could be passed on to consumers in the form of lower prices.

But not everyone wanted a car that was black. Not everyone wanted a Ford or a Model T. Not everyone wanted to take orders from one man at the top of the corporate pyramid. Alfred P. Sloan let each division of General Motors operate in its own way. He was not only an innovator in corporate organization, he also mastered the new consumer culture of the 1920s. If consumers started out owning a Chevrolet but wanted a better car when their incomes rose, he would be happy to sell them a Buick or an Oldsmobile. If they were doing really well, he would be more than glad to sell them an expensive Cadillac. And if consumers did not have the cash to buy a GM product, the company would sell them one on credit.

Sloan also pioneered what became known as “planned obsolescence” by creating a different model of each GM brand each year. There might be technological improvements or maybe just a styling upgrade. But the changes in each new “model year” were designed to create interest in GM and sell more GM vehicles to consumers who were merely tired of their old cars. Said Sloan, GM existed “not . . . to make motor cars” but “to make money”.

[T]he corporation should produce a line of cars in each price area, from the lowest price up to one for a strictly high-grade quantity production car. . . . [T]he price steps should not be such as to leave wide gaps in the line, and yet should be great enough to keep their number within reason, so that the greatest advantage of quantity production could be secured; and . . . There should be no duplication by the corporation in the priceline of steps.

In the 1920s, GM charged forward while Ford stood still. Henry Ford refused to innovate or respond to consumer demand, and by the mid-1920s, many people were buying GM cars instead of Fords. Ford’s company was falling behind the times – and fast. Not a particularly young man when he entered the auto business, Ford was now in his sixties, but he reacted boldly. He closed his plants for most of 1927 – not one car rolled off his once-dominant assembly lines – while he figured out what to do next. The result was the new-fangled Model A, and the public loved it. Ten million people – 8.5 percent of the U.S. population – saw the car within the first 36 hours of its release. At New York’s Madison Square Garden, 1,250,000 people trooped in to see it in just five days.

The Model A went 65 miles per hour, came in four colors, and boasted 17 body styles. And, like GM’s product line, it could be bought on credit. Within six months, Ford had sold an astounding two million Model As. He had emulated GM’s methods and was competitive once again.

Eventually, both Ford and Sloan had reacted to the demands of the marketplace. Consumers now enjoyed a wider variety of cars offered by large manufacturers. In the 1920s, automobiles became one of the staples of the American economy and consumer culture. Over the next few decades, they also facilitated the rise of suburbs, increased geographical mobility, and stimulated the travel and tourism industry around the country.

1. During the first quarter of the twentieth century, the internal combustion engine enabled people to accomplish all the following except

2. The adoption of assembly-line manufacture by Henry Ford was similar to which technological development in U.S. history?

3. Henry Ford’s success in the marketplace was aided by his ability to

5. Henry Ford temporarily closed his factories in 1927 because

1. Which of the following best describes events depicted in this photograph?

2. Manufacturing strategies such as those used in the photo were first successfully implemented in the automobile industry by

3. A historian might use this image to support which historical claim?

“Henry Ford Explains Why He Gives Away $10,000,000: Declares that He Is Dividing Profits with His Employees, Not Paying Them Higher Wages, and that Workers as Partners Will Give Increased Efficiency.” New York Times. January 11, 1914, Sunday Magazine, pp. 1, 3.

Brinkley, Douglas. Wheels for the World: Henry Ford, His Company, and A Century of Progress. New York: Penguin, 2003.

Lacey, Robert. Ford: The Men and the Machine. Boston: Little, Brown and Company, 1986.