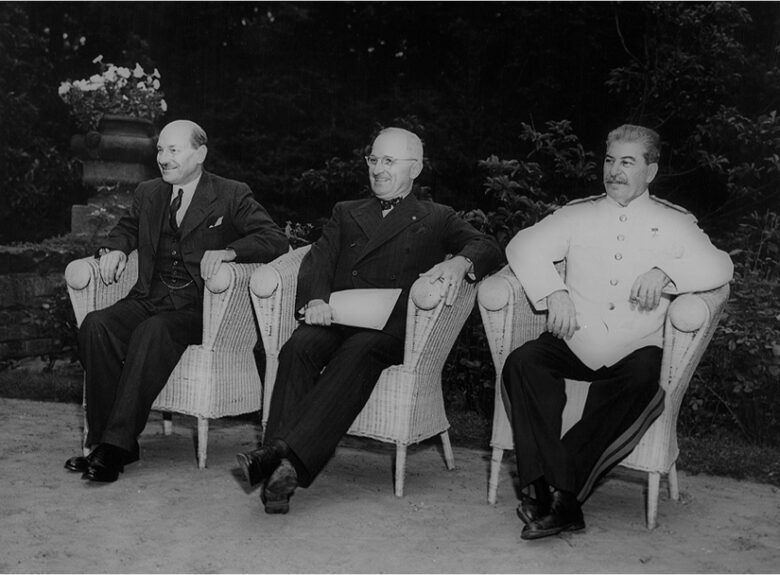 Use this decision point with The Manhattan Project Narrative and the Was the Use of the Atomic Bomb Justified? DBQ Lesson to show the development of the United States’ nuclear program and subsequent use in the Hiroshima and Nagasaki bombings.

The atomic bombings of Hiroshima and Nagasaki on August 6 and 9, 1945, culminated a multiyear development process. German scientists had split the uranium atom in 1938, before World War II even began, which led eminent scientist Albert Einstein to alert President Franklin D. Roosevelt to the possibility that Adolf Hitler’s regime might eventually develop an atomic bomb. The president took the threat seriously and formed a committee headed by Italian émigré scientist Enrico Fermi to evaluate the options for developing the weapon in the United States.

Roosevelt reassigned the work in August 1942 to the U.S. Army Corps of Engineers, which named it the Manhattan Project, after the project’s supervising engineering district. Work was carried out in Illinois, Washington state, Tennessee, and Los Alamos, New Mexico. It was at the latter facility that scientist J. Robert Oppenheimer and his team developed the first atomic bombs. With British assistance, and under the eye of Soviet espionage, construction of the first bomb, code-named S-1, had neared completion by the time Roosevelt died in office on April 12, 1945.

Vice President Harry S. Truman, who succeeded Roosevelt as president, at first glance did not seem to possess the skills necessary for making major international or military policy decisions as World War II approached its end. Sixty-one years old in the spring of 1945, he had no background in science and little in weapons technology beyond his service as commander of an artillery battery in World War I. Truman was not well traveled, and outside his Wilsonian ideals and personal studies, he had little understanding and no experience of diplomacy, culture, and geopolitics. His background was in small business and local politics in his native Missouri.

Truman learned about the atomic bomb project 12 days after taking the oath of office. He recognized that Germany’s defeat was imminent but expected a long and brutal campaign in the Pacific against Japan. With this in mind, he created an interim committee of leading members of his cabinet and prominent intellectuals to study the possibility of using the bomb against Japan.

After consulting with Oppenheimer, the Joint Chiefs of Staff, and high-level scientists in a number of fields, the committee advised Truman that the atomic bomb should be dropped without warning on a Japanese city containing targets of military value. A few Manhattan Project scientists dissented, suggesting that deploying a demonstration bomb at a neutral site in front of Japanese observers might have the same effect without loss of life. Fermi, Oppenheimer, and other leading scientists disputed this proposal, arguing that a demonstration could fail, and that it might not clearly illustrate the bomb’s devastating power.

News of the successful test of the first atomic bomb at Alamogordo, New Mexico, on July 16, 1945, reached Truman while he was engaged in high-level negotiations about the end of the war with Soviet Premier Joseph Stalin and new British Prime Minister Clement Attlee, at the Potsdam Conference in Germany. Truman had the advice of America’s leading military figures and scientists about how to use the bomb, but he nevertheless needed to consider a number of factors before deciding what to do next.

By this time, World War II had raged for six years at almost incalculable cost, ravaging much of the globe. Like most Americans, Truman believed his country to be engaged in a war for national survival. In Asia, battles at places like Iwo Jima and Okinawa had progressed with shocking brutality. Japanese soldiers typically fought to the death—killing as many Americans as possible in the process. On Okinawa, Japanese civilians committed suicide rather than accept defeat or capture. American military leaders estimated that an invasion of the Japanese home islands could cost one million U.S. casualties and more than one million lives total on both sides.

Truman’s Potsdam Declaration of July 26, 1945, called for Japan’s unconditional surrender, but it also recognized that the Japanese government had shown no clear willingness to negotiate. Nor did there seem to be any obvious military alternatives to an invasion of Japan. After the fact, some military historians argued that the United States might simply have starved Japan into surrender. By 1945, the Japanese merchant fleet had been reduced to 1.5 million tons, a mere quarter of its original strength. Supplying the home islands with adequate food and other necessities was becoming increasingly difficult, but even so, the Japanese might well have endured even a full blockade for many years. Starvation and disease would be the obvious result, to say nothing of the impact of continued conventional bombing. For example, the March 9 and 10, 1945, firebombing of Tokyo killed an estimated 100,000 people and left one million homeless. The victims would include Japanese children and the thousands of Allied prisoners of war still being held under horrific conditions in camps on the Japanese home islands and across Asia. They would die in a protracted war, and Japan would be reduced to a wasteland.

Even with these factors in mind, Truman lacked clear choices between invading Japan and deploying the atomic bomb without an invasion. Whatever he decided, there was no way to predict how Japan’s leaders would react. They might surrender, or they might not. Truman had to consider the possibility that he might drop the atomic bomb and still have to order an invasion. Time was the vital factor. Could the United States—could the world—face the consequences of months or years of continued war?

Looking at his domestic constituency, Truman recognized that the national mood in the United States was not triumphant but fearful. Americans worried about the possible return of the Great Depression and hoped for the safe return of millions of soldiers. In these circumstances, they did not question the morality of firebombing cities in Germany or Japan so long as it hastened the end of the war. Radical solutions were popular. Many Americans, although Truman did not share their view, also entertained a sense of racial superiority over the Japanese, suggesting that any measures taken to defeat the despised enemy would be acceptable.

The growing threat of Soviet domination in Asia presented another vital factor that influenced Truman’s thinking. Just as Stalin had long pressured the western Allies to open a second front in Europe, they, in turn, had encouraged the Soviets to attack Japanese-occupied territories in what are now parts of China and Korea. Stalin resisted until he felt the time was right, but at the February 1945 Yalta Conference, he finally agreed to invade Manchuria. At Potsdam, he told Truman the assault would begin in August. By now, however, Stalin’s intervention was unnecessary in Truman’s eyes because of the atomic bomb and because an invasion by Stalin would dangerously expand Soviet influence in Asia.

Truman recognized the risk that dropping the atomic bomb would horrify the world, undermining American influence across the globe and alienating allies in western Europe. But he also anticipated an even greater threat: the possibility that large-scale Soviet intervention in Asia might lead to a military confrontation between the United States and the Soviet Union. This constituted a very real danger in the tense environment of the summer of 1945, when the first signs of the impending Cold War were becoming obvious. War between the Americans and Soviets would have engendered a renewed global conflict, dwarfing even the casualties resulting from a direct invasion of Japan.

After considering all these factors and noting Japan’s refusal to consider his Potsdam Declaration, Truman ordered America’s two existing atomic bombs to be dropped on Japanese cities. The first fell on Hiroshima on August 6, killing more than 60,000 people in the immediate blast. In the absence of a prompt surrender by the Japanese government, the second bomb was dropped on Nagasaki on August 9, instantly killing perhaps 35,000 people. Many tens of thousands more Japanese would die of wounds and radiation poisoning in the aftermaths of the bombings and in the years to come. Fearing more atomic blasts, and with Soviet troops racing across the Chinese border against crumbling Japanese armies, Emperor Hirohito announced the surrender of Japan. General Douglas MacArthur accepted the formal Japanese surrender aboard the U.S.S. Missouri in Tokyo Bay on September 2, 1945.

President Truman had made perhaps the most difficult decision of the war. In his memoirs, he noted the gravity of the decision while also implying the importance of presidential decisiveness: “The final decision of where and when to use the atomic bomb was up to me. Let there be no mistake about it. I regarded the bomb as a military weapon and never had any doubt that it should be used.” Truman did what he thought necessary to end a horrific war that claimed the lives of as many as 80 million soldiers and civilians around the globe.

1. President Franklin D. Roosevelt authorized the Manhattan Project because he

2. Which of the following would President Truman have found a valid reason to forego using atomic weapons on Japan?

3. President Truman decided to use the atomic bombs against Japan because

4. Which statement most accurately describes the Manhattan Project?

5. President Truman first became aware of the scope and goal of the Manhattan Project

7. A reason proposed for not using atomic weapons against Japan in the summer of 1945 was

8. A reason to use atomic weapons against Japan in the summer of 1945 was that

“TOP SECRET RECOMMENDATIONS ON THE IMMEDIATE USE OF NUCLEAR WEAPONS June 16, 1945 You have asked us to comment on the initial use of the new weapon. This use . . . should be such as to promote a satisfactory adjustment of our international relations. At the same time, we recognize our obligation to our nation to use the weapons to help save American lives in the Japanese war. . . . (2) The opinions of scientific colleagues on the initial use of these weapons are not unanimous; they range from the proposal of a purely technical demonstration to that of the military application best designed to induce surrender. Those who advocate a purely technical demonstration would wish to outlaw the use of atomic weapons . . . Others emphasize the opportunity of saving American lives by immediate military use, and believe that such use will improve the international prospects . . . we see no acceptable alternative to direct military use. (3) . . . We have, however, no claim to special competence in solving the political, social, and military problems which are presented by the advent of atomic power. . . . [signed] J.R. Oppenheimer For the Panel”

1. The provided excerpt most directly reflected a growing belief that

2. The events discussed in the excerpt were most directly shaped by

3. The events discussed in the excerpt illustrate which of the following?

Rhodes, Richard. The Making of the Atomic Bomb. New York: Simon and Schuster, 1987.