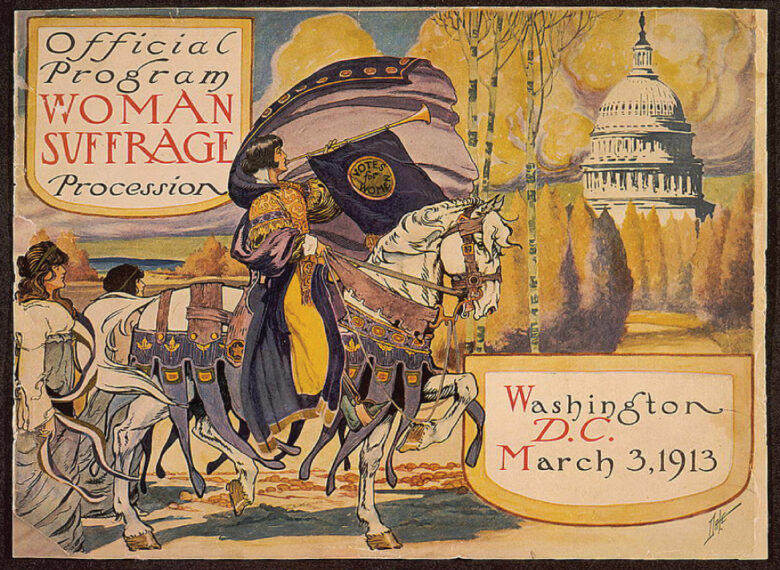 In 1848, in Seneca Falls, New York, Elizabeth Cady Stanton boldly declared that “woman is man’s equal” and “it is the duty of the women of this country to secure to themselves their sacred right to the elective franchise.” Stanton’s Declaration of Sentiments and Resolutions set the goals of a women’s movement intended to achieve the self-evident truths expressed in the Declaration of Independence. Inspired by the leadership of Elizabeth Cady Stanton, Susan B. Anthony, and others, women advocated for numerous social and legal reforms throughout the mid- to late nineteenth century, including abolition and temperance, as well as equality under the law and votes for women. But despite important successes in achieving women’s suffrage in several states, especially in the West, by 1900, the suffrage movement was stalling. Alice Paul provided a new voice and new energy in the struggle.

Born to a Quaker family in New Jersey in 1885, Paul attended women’s suffrage events from a young age. Although she studied social work and served the poor in settlement houses, she disdained the professions open to women: nursing, teaching, and social work. After completing degrees in biology and sociology, Paul sailed to Great Britain in 1907 to continue her studies in economics and sociology. She joined the Women’s Social and Political Union (WSPU) in Britain, participating in processions, demonstrations, and civil disobedience for women’s equal rights. As a result, she and other suffragists in Britain were arrested and imprisoned. Led by Emmeline and Christabel Pankhurst, WSPU members protested their treatment in prison by conducting hunger strikes, which sometimes led to forced feedings. Hunger strikes became a powerful weapon because they resulted in additional publicity, built sympathy for the cause, and sometimes led to early release as a prisoner’s health declined.

In 1910, Paul returned from Great Britain to work for legal and economic equality for American women, joining the National American Woman Suffrage Association (NAWSA). Between 1890 and 1910, NAWS’s state-by-state strategy had succeeded in only a few western states. Paul believed it was time to shift to more militant and confrontational protest tactics at the national level, such as those in which she had participated in England, including street meetings, parades, and picket lines. All these nonviolent activities drew harsh criticism from those who believed such behaviors represented unlady like, shameful rebellion against women’s proper roles. Paul challenged the boundaries of acceptable public behavior in order to gain attention and sympathy for her cause. In 1913, she and other NAWSA members saw in Woodrow Wilson’s inauguration a perfect opportunity to push for a women’s suffrage amendment. They organized a Woman Suffrage Procession for March 3, the day before Wilson’s inaugural parade. More than 8,000 people marched for the cause despite harassment and attacks from a crowd of spectators estimated at half a million people.

Believing NAWSA was too conservative, Alice Paul and Lucy Burns founded the Congressional Union for Women’s Suffrage, which, in 1917, became the National Women’s Party (NWP). This small but determined group distributed pamphlets, held peaceful protests, and lobbied Congress for a constitutional amendment to guarantee women equality in voting. More than 20 of the then 48 states had granted women the right to vote in state and local elections by 1917, but the NWP insisted that a state-by-state approach was inadequate and unjust.

Opposition to women’s suffrage took various forms. The National Association Opposed to Woman Suffrage, founded in 1911, relied on several traditional claims. One was that women were mentally incapable of the reasoning necessary for civic literacy. Another was that becoming civically informed and voting would take women’s focus away from their proper domestic sphere. Other antisuffrage arguments were that most women did not even want the vote, and that married women would probably vote as their husbands did, thereby increasing the cost of elections without changing the outcome. Although Quakers had always stood for complete equality, some other religious leaders maintained that it was simply unnatural for women to speak in public or be involved in political affairs. More sinister were the arguments that there was no way to give native-born white women the vote without also giving it to black and immigrant women.

Frustrated with President Wilson’s failure to promote women’s suffrage, Paul and other members of NWP sought repeated meetings with him, which he attended without committing to any action. Finally, he informed the suffragists that he was tired of repeating the same conversations and would receive no more suffrage delegations. “All right [we thought], we will send this perpetual delegation. And you won’t have to see it; we will just hold up banners reminding you,” Paul explained in an interview years later.

In January 1917, Paul led the NWP to picket on the sidewalk in front of the White House, demanding that Wilson support votes for women. The first-ever to implement this protest method at the White House, the Silent Sentinels stood watch continuously for the next 18 months, holding large banners that charged Wilson with hypocrisy. Wilson’s April 2, 1917, speech asked Congress to declare war on Germany to “make the world safe for democracy,” but according to one banner, “20,000,000 American women are not self-governed”. Mobs attacked the women verbally and physically as police stood by, leaving the women to fend for themselves.

Though the Silent Sentinels were nonviolent, broke no laws, and never disturbed the peace, police officers began arresting the demonstrators in June. They issued citations but did not always jail the women, many of whom were professionals and members of the elite society of Washington, DC. Undeterred, women who had been arrested returned to their posts. By July, the United States was fully engaged in World War I, and Wilson wanted the protests to cease. As the women were arrested, new protesters stepped up to take their places until they too were arrested and sent to jail. In Washington’s District Jail, and in the Occoquan Workhouse a short distance outside the city, the women were beaten, kicked, choked, chained to cell bars, locked in rat-infested cells, and provided only rotten, worm-filled food. They were permitted neither visitors nor consultation with their lawyers. Over time, the jail sentences increased, with longer and harsher sentences and additional tortures applied to leaders like Paul and Burns.

Protesting against these degrading conditions, Paul initiated hunger strikes. As had been the case in the suffrage movement in England, when an extended hunger strike seriously jeopardized a prisoner’s health, the authorities began twice-daily forced feedings. Always willing to take extreme measures to awaken the American conscience, Paul wrote that any brutality applied against the protesters provided “excellent ammunition” in the cause. “The more harsh we can make the Administration seem . . . the better,” she had explained in a letter to sister suffragist and Silent Sentinel Dora Lewis.

News reports of the women’s self-sacrifice embarrassed Wilson. Public outcry in response to jailing and brutalizing American citizens, particularly upper-class, educated women, for exercising their constitutional right to peacefully protest forced the administration to change tactics. Arguments that women, like men, are endowed with the ability to reason and with equal inalienable rights under the Constitution were finally gaining ascendancy over the traditional arguments against women’s suffrage.

World War I increased the suffrage movement’s momentum as women entered the workforce to replace men who had joined the military. Women’s contribution to the war effort and the progressive call for citizens – more direct voice in their government were persuasive for increasing numbers of Americans. In 1918, Wilson finally announced his support for suffrage. An amendment prohibiting the national and state governments from denying the vote to women, called the Susan B. Anthony Amendment, had first been introduced in Congress in 1878. It passed both houses of Congress in June 1919 and was sent to the states for ratification. On August 18, 1920, Tennessee narrowly became the thirty-sixth state to ratify the amendment, satisfying the constitutional requirement of ratification by three-fourths of the states. The Nineteenth Amendment to the U.S. Constitution finally protected votes for women across the nation.

Knowing that the right to vote was necessary but not sufficient for equal participation in civic life, Paul continued to fight for women’s rights throughout her life. In a 1923 celebration commemorating the seventy-fifth anniversary of the Seneca Falls Convention, she announced that she had drafted an Equal Rights Amendment calling for absolute equality: “Men and women shall have equal rights throughout the United States and every place subject to its jurisdiction.” She emphasized, “We shall not be safe until the principle of equal rights is written into the framework of our government.” This “Alice Paul Amendment” was introduced in each session from 1923 until Congress finally approved it in 1972. Congress stipulated a deadline of seven years for ratification by three-fourths (38) of the 50 states. Though that deadline was extended until 1982, the Equal Rights Amendment (ERA) failed to win ratification, falling short by three states. In an interview, Paul stated, “I never doubted that equal rights was the right direction. Most reforms, most problems are complicated. But to me, there is nothing complicated about ordinary equality.”

It was as if she had bidden women stand erect, with confidence in themselves and in their own judgments, and compelled them to be self-respecting enough to dare to put their freedom first, and so determine for themselves the day when they should be free – [she dared them to] know how fine and strong a thing it is to realize that you must take what is yours and not waste your energy proving that you are or will some day be worthy of a gift of power from your masters. On that glad day of discovery, you have first freed yourself to fight for freedom. Alice Paul gave to thousands of women the essence of freedom.

1. The primary objective of women’s rights activists in the early twentieth century was

2. Pursuing a state-by-state strategy, the National American Woman Suffrage Association was most successful in securing women’s suffrage in which part of the United States by 1910?

3. The 1917 split in the women’s movement between the National American Woman Suffrage Association and the National Women’s Party centered on

4. The existence of the National American Woman Suffrage Association and the National Women’s Party in the early twentieth century best demonstrated that

5. Opponents of women’s suffrage raised all the following arguments except

6. To achieve their goals, Alice Paul and other like-minded suffragists expanded their tactics to include

7. President Wilson’s support for women’s suffrage was most influenced by

1. This image reflects which continuity in American history?

2. The trend demonstrated in the image was most directly shaped by

3. This map most directly reflected a growing belief that

Women of Protest: Photographs from the Records of the National Woman’s Party. Library of Congress. https://www.loc.gov/collections/women-of-protest/

Walton, Mary. A Woman’s Crusade: Alice Paul and the Battle for the Ballot. London: Palgrave Macmillan, 2010.