Zora Neale Hurston was a celebrated author and anthropologist who grew up in the all-Black town of Eatonville, Florida. After her mother’s death, Hurston moved to Jacksonville, a segregated Florida town. It was then, she writes, that “I was not Zora of Orange County any more, I was a little colored girl.” In 1925, Hurston received a scholarship to Barnard College in New York City. While in the city, she befriended other writers such as Langston Hughes and became an artist of the Harlem Renaissance. Hurston’s work focused on Black culture and Black Americans in the South. In this essay, she explores her discovery of her identity as a Black American and celebrates her self-pride.

. . . I am not tragically colored. There is no great sorrow dammed up in my soul, nor lurking behind my eyes. I do not mind at all. I do not belong to the sobbing school of Negrohood who hold that nature somehow has given them a lowdown dirty deal and whose feelings are all but about it. Even in the helter-skelter skirmish that is my life, I have seen that the world is to the strong regardless of a little pigmentation more or less. No, I do not weep at the world—I am too busy sharpening my oyster knife. . . .

At certain times I have no race, I am me. When I set my hat at a certain angle and saunter down Seventh Avenue, Harlem City, feeling as snooty as the lions in front of the Forty-Second Street Library, for instance. . . . I belong to no race nor time. I am the eternal feminine with its string of beads.

I have no separate feeling about being an American citizen and colored. I am merely a fragment of the Great Soul that surges within the boundaries. My country, right or wrong.

Sometimes, I feel discriminated against, but it does not make me angry. It merely astonishes me. How can any deny themselves the pleasure of my company? It’s beyond me. 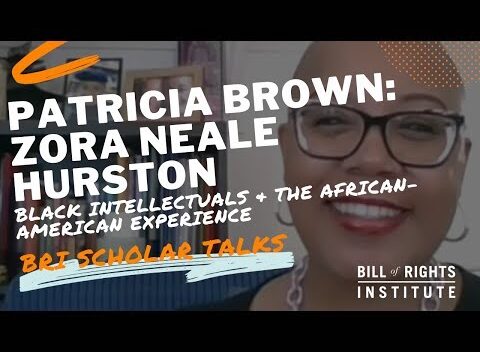 How did Zora Neale Hurston, noted African-American writer during the Harlem Renaissance, contribute to understanding the Black experience in America? In this episode of our Scholar Talk series "Black Intellectuals and the African American Experience," BRI Senior Teaching Fellow Tony Williams is joined by Patricia Brown, professor of English at Azusa Pacific University, to discuss Hurston's unique examination and celebration of Black expression, creativity, and resiliency. How did Hurston's book "Their Eyes Were Watching God" convey a message of Black women's freedom and self-discovery?