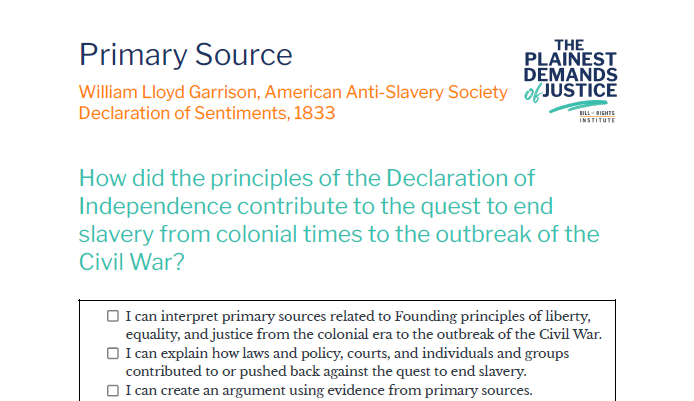 The American Anti-Slavery Society, founded in 1833, called for the immediate and uncompensated emancipation of all enslaved persons. The group’s main organizer and author of its Declaration of Sentiments, William Lloyd Garrison, was well-known as one of the most uncompromising of North American abolitionists. His anti-slavery journal, “The Liberator”, used fiery rhetoric to condemn slavery.

More than fifty-seven years have elapsed, since a band of patriots convened in this place, to devise measures for the deliverance of this country from a foreign yoke. The corner-stone upon which they founded the Temple of Freedom was broadly this – “‘that all men are created equal; that they are endowed by their Creator with certain inalienable rights; that among these are life, LIBERTY, and the pursuit of happiness.” At the sound of their trumpet-call, three millions of people rose up as from the sleep of death, and rushed to the strife of blood; deeming it more glorious to die instantly as freemen, than desirable to live one hour as slaves. They were few in number – poor in resources; but the honest conviction that Truth, Justice and Right were on their side, made them invincible. . .

. . . Their grievances, great as they were, were trifling in comparison with the wrongs and sufferings of those for whom we plead. Our fathers were never slaves – never bought and sold like cattle – never shut out from the light of knowledge and religion – never subjected to the lash of brutal taskmasters.