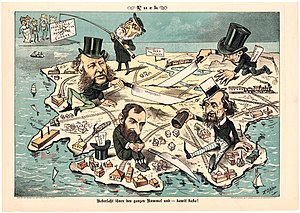 Were the industrial titans of the Gilded Age “robber barons” seeking profit at the expense of their workforce, or were they simply entrepreneurial industrialists whose rapidly growing industries provided thousands of well-paying jobs to less-skilled workers?

Big tasks require big enterprises. No mom-and-pop store could build a transcontinental railroad, not when a single mile of track cost more than most small firms were worth; the complicated finances of the Pennsylvania Railroad required more than 100 separate sets of accounts and myriad specialized departments to manage them. Able to invest in expensive machinery, a single company could turn out cigarettes faster than an army of craftspeople and for a fraction of the cost. By 1900, America ate better, dressed more cheaply, and got to places faster, all because of mammoth firms—the wheat of Minnesota’s Red River Valley turned into bread on tables in Mississippi and Maine. Who could doubt that bigness in business was better?

Plenty of Americans did, and rightly. With bigness came power—more than responsibility. Competition bred innovation and invention, but monopoly stifled it, turning creative entrepreneurs into maintainers of an extremely comfortable, prosperous status quo. Woe to the small oil refiner when Standard Oil wanted control of its territory! Invitations to sell out might be followed by intimidation, selling at unprofitable discounts to drive away competitors, and, occasionally, sabotage. Carnegie Steel had the muscle to break employees’ unions, drive their wages to a bare minimum, and hire private armies to protect their factories. When jute bagging could be sold profitably at five cents a square yard, the “Jute Trust” had such a control over supply that it could raise the price to twice as much. If the meatpackers dumped their waste into Lake Michigan, what public officer was about to fight with so large an employer of Chicagoans? Certainly not the “grey wolves,” as the bribe-welcoming aldermen were known. Injured workers could get a lawyer; their employers, all too often, could get a judge and by manipulating doctrines of “freedom of contract,” “assumption of risk,” and the “fellow-servant rule,” make sure that whoever had to pay compensation for the hurt done, it would not be the company. Monopoly power let the “ice trust” sweat New Yorkers through exorbitant charges, but there was nothing it could have told California farmers about extortion. They knew it well enough from their dealings with the “Octopus,” the railroad combine that, free from competition, charged what it pleased and shipped perishables whenever it happened to get around to it. Not for nothing did editor Ambrose Bierce refer to Collis Huntington, one its chiefs, as one of the surviving 36 of the Forty Thieves.

Big businesses had the money to lobby themselves special deals in legislation: a high tariff duty on steel imports or even on tin plate that no domestic firm made but might someday. Or the firms might win a right to issue scrip instead of real cash to its employees, an artificial currency that could be used only at the company-run stores where the markup might be 60 percent higher than elsewhere. Standard Oil, as one reformer complained, had done everything to Pennsylvania lawmakers except refine them. So much wealth helped turn the U.S. Senate into a millionaire’s club. The Central Pacific usually owned one California senator, the way the Comstock Lode did both of Nevada’s. In Montana, Anaconda Copper had a virtual veto over any state or national official. The Union Pacific Railroad’s “oil room” lubricated Nebraska’s legislators into a good will almost as effectively as the big insurance companies did those in Albany.

Defenders of bigness pointed out the benefits and insisted the real problem lay in the large firms’ misuse of their power, not their size. Regulation could keep the advantages of big business while removing the abuses, so Theodore Roosevelt thought. Given the choice between breakup and a benevolent oversight, big businesses agreed with Roosevelt—enough to contribute lavishly to his presidential campaign. Woodrow Wilson knew better. Once the government regulated monopoly, he told an audience, “then monopoly will have to see to it that it regulates the government.” It was their very size that put abuses of national scope within the trusts’ power and that put them beyond the reach of even the highest-ranking government cop on the beat.

The term “robber baron” refers to the entrepreneurs who built this country’s industrial base, transportation infrastructure, and financial markets in the post–Civil War era. The term, supposedly, comes from the medieval nobility who lived along the Rhine River and charged tolls on passing boats. Those robber barons, of course, were exactly that, robbers. They created no wealth. Instead they extracted it from passers-by under threat of violence. It was what today we would call a protection racket.

Is the term a fair one when applied to the likes of Andrew Carnegie, J. P. Morgan, and John D. Rockefeller? The answer is an unequivocal no. For one thing, unlike their medieval namesakes, the robber barons created enormous amounts of wealth. And, because one of the iron laws of economics is that you can’t take it with you, much of that wealth is seen today in a vast array of charitable and educational institutions such as libraries, museums, colleges, and hospitals. So they certainly enriched both themselves and the nation as a whole, making the United States the world’s greatest industrial power.

But how did they treat their customers and their workers? Generally, they made the lives of their customers better and richer, often greatly so, by bringing about lower prices for various important commodities. For instance, in the last three decades of the nineteenth century, the price of kerosene, then the main product of Rockefeller’s Standard Oil Company, declined by two-thirds, as economies of scale allowed greater profits at lower prices. So did the price of steel in the same time, thanks to Andrew Carnegie’s emphasis on efficiency. It was Henry Ford who brought the price of an automobile down to the point where it could be afforded by the common man.

And although they naturally wanted to maximize their profits by paying low wages, they also provided jobs for the millions of people moving off farms as farming became more mechanized (and food prices lower).

To put the robber barons in proper perspective, it is important to understand that industrial capitalism was something very new at that time. The rules needed to make it work for all members of the economic community had not yet been written. They came to be written in three ways.

Sometimes the robber barons forced reform on other robber barons. Managers of companies wanted the corporate books to make them look good. Investors and banks wanted honest books that could be compared with competing firms. Wall Street bankers such as J. P. Morgan and the New York Stock Exchange began requiring that books be kept according to what today we call “generally accepted accounting principles” and that those books be audited by independent accountants. In other words, Wall Street robber barons forced industrial robber barons to mend their bookkeeping ways.

Sometimes it was the robber barons who forced government to update laws and regulations. Most state incorporation laws, passed in the early nineteenth century, did not allow corporations to own the stock of other corporations or even to hold property located out of state. But as an integrated, continent-wide economy arose, in large part thanks to the robber barons, these out-of-date laws impeded efficient operations of the new nation-spanning corporations. In 1889, New Jersey, under pressure from Standard Oil, reformed its incorporation laws to take the modern economy into account, and the other states were then forced to bring their laws into conformity with the new economy.

And sometimes, of course, government forced reform on the robber barons. Predatory pricing by railroads brought about the creation of the Interstate Commerce Commission in 1887, the country’s first federal regulatory body.

As businesses grew, they often merged with competitors. But as the number of companies within an industry declined, so did competition. With 90 percent of the oil market, Standard Oil could dictate prices and force competitors to sell out to it, at a price determined by Standard Oil. Monopolies are always economically evil, though, because they feel no pressure to innovate. Around the turn of the century, the Congress regulated monopolies to preserve competition in the marketplace. The Sherman Antitrust Act of 1890 and the Clayton Antitrust Act of 1914 forbade “combinations in restraint of trade,” and other anticompetitive practices.

So the robber barons, far from being robbers, were the prime creators of the modern economy and helped mightily to propel the country to a position of global economic supremacy and to make the average American, and the country as a whole, far richer.

White, Richard. The Republic for Which It Stands: The United States during Reconstruction and the Gilded Age, 1865-1896. Oxford, UK: Oxford University Press, 2017.