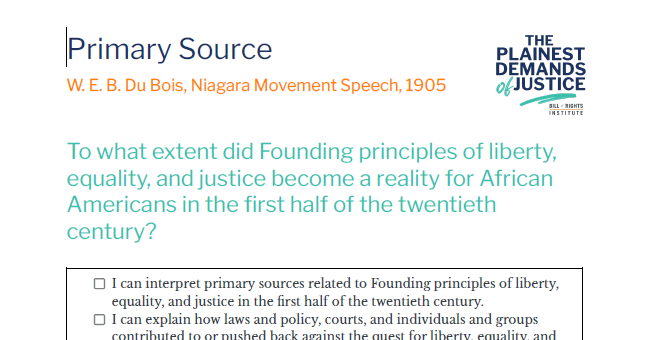 W.E.B. Du Bois was a Harvard-trained professor at Atlanta University who published essays about the Black experience in America. In his seminal book, The Souls of Black Folk (1903), Du Bois argued that the quest for justice and equality was dependent on higher education for Blacks and the creation of Black educators. He argued that they would comprise a “Talented Tenth” who would educate the minds of other Black Americans and prepare them for citizenship, civil rights, and voting. Du Bois helped found the National Association for the Advancement of Colored People (NAACP) in 1909.

It is a peculiar situation, this double-consciousness, this sense of always looking at one’s self through the eyes of others, of measuring one’s soul by the tape of a world that looks on in amused contempt and pity. One ever feels his twoness,—an American, a Negro; two warring ideals in one dark body, whose dogged strength alone keeps it from being torn asunder . . .

. . . He simply wishes to make it possible for a man to be both a Negro and an American, without being cursed and spit upon by his fellows, without having the doors of Opportunity closed roughly in his face . . . Negroes must insist continually . . . that voting is necessary to modern manhood, that color discrimination is barbarism, and that black boys need education as well as white boys. . . . In failing thus to state plainly and unequivocally the legitimate demands of their people, even at the cost of opposing an honored leader, the thinking classes of American Negroes would shirk a heavy responsibility—a responsibility to themselves, a responsibility to the struggling masses, a responsibility to the darker races of men whose future depends so largely on this American experiment, but especially a responsibility to this nation . . .

When in fact the burden belongs to the nation, and the hands of none of us are clean if we bend not our energies to righting these great wrongs. . . .

By every civilized and peaceful method we must strive for the rights which the world accords to men, clinging unwaveringly to those great words which the sons of the Fathers would fain forget: “We hold these truths to be self-evident: That all men are created equal; that they are endowed by their Creator with certain unalienable rights; that among these are life, liberty, and the pursuit of happiness.” 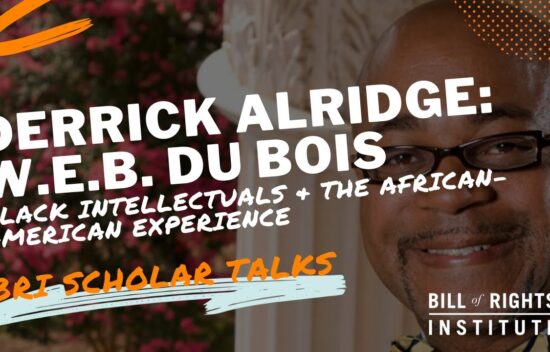 How did W.E.B. Du Bois, prominent African-American intellectual, contribute to understanding the Black experience in America? In this video, BRI Senior Teaching Fellow Tony Williams is joined by Derrick P. Alridge, Professor of Education at the University of Virginia and affiliate faculty member in the Carter G. Woodson Institute for African-American and African Studies. Dr. Alridge is the author of "The Educational Thought of W.E.B. Du Bois: An Intellectual History." Together, they explore the educational ideas of Du Bois and the ways he challenged racial discrimination in "The Souls of Black Folk" and as editor of "The Crisis." How did his ideas about the "Talented Tenth” and Black education promote equality and justice?