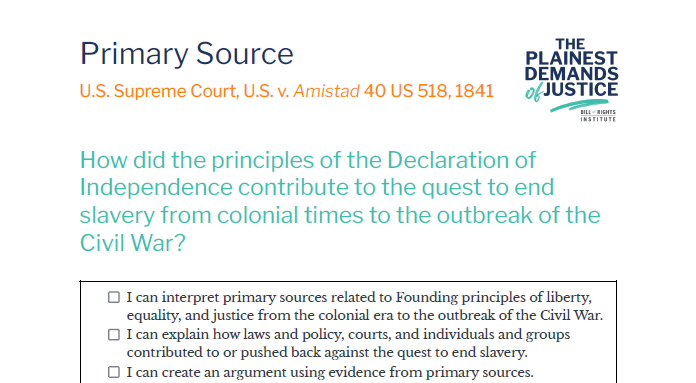 In June 1839, dozens of Africans in chains destined for slavery on Cuba’s plantations successfully broke free and took control of the ship, named the Amistad. They intended to sail back to Africa, but the remaining Spanish crew secretly altered course and the ship arrived in the United States. The Amistad was seized by the U.S. Navy and the courts were asked to determine the fate of the ship and the people on board. Spain demanded the return of the ship and the enslaved people, but wealthy U.S. abolitionists organized a legal team led by John Quincy Adams to defend the Africans in their bid for freedom. The case went all the way to the Supreme Court, which ruled 7-1 in the Africans’ favor.

It is plain beyond controversy, if we examine the evidence, that these negroes never were the lawful slaves of Ruiz or Montez or of any other Spanish subjects. They are natives of Africa, and were kidnapped there, and were unlawfully transported to Cuba in violation of the laws and treaties of Spain and the most solemn edicts and declarations of that government. By those laws and treaties and edicts, the African slave trade is utterly abolished; the dealing in that trade is deemed a heinous crime; and the negroes thereby introduced into the dominions of Spain are declared to be free. [593]