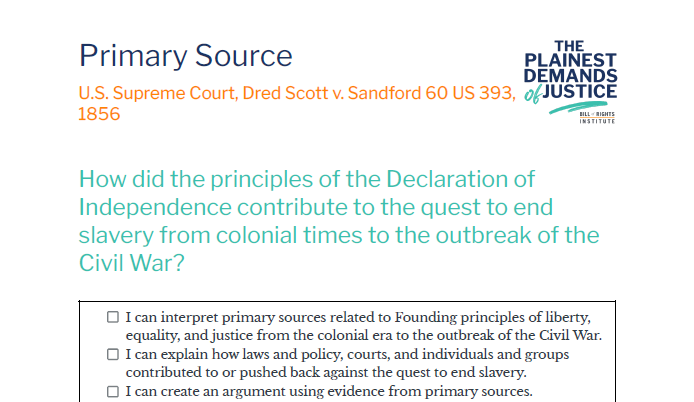 The Dred Scott v. Sandford (1857) case was brought to the Supreme Court just 4 years before the start of the Civil War. Dred Scott was an enslaved man in Missouri who moved with his master to the free state of Illinois and the free federal territory of Wisconsin. Upon moving back to Missouri, Scott sued his master for his freedom, claiming that he became free when they moved to the northern free state and territory. The Supreme Court agreed to hear the case because the justices hoped it would settle political tensions over slavery. Their 7-2 ruling established two things: first, African Americans were not citizens and had no right to sue in court; and second, Congress did not have the constitutional authority to ban slavery from the territories. The opinion of the court was written by Chief Justice Roger Taney, a southern supporter. Like John C. Calhoun and other southern defenders of slavery, Taney read the Declaration of Independence as an affirmation of the natural rights of whites only, rather than a universal statement of the inherent rights of all humans.

It is difficult at this day to realize the state of public opinion in relation to that unfortunate race which prevailed in the civilized and enlightened portions of the world at the time of the Declaration of Independence and when the Constitution of the United States was framed and adopted. But the public history of every European nation displays it in a manner too plain to be mistaken. They had for more than a century before been regarded as beings of an inferior order, and altogether unfit to associate with the white race either in social or political relations, and so far inferior that they had no rights which the white man was bound to respect, and that the negro might justly and lawfully be reduced to slavery for his benefit. [407]