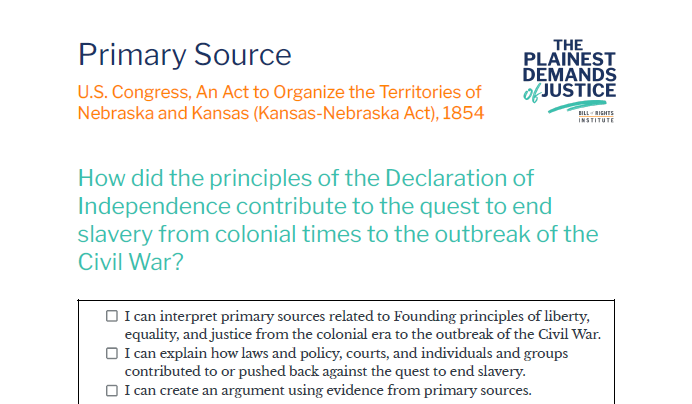 The expansion of slavery was even more of a contentious national issue by 1850. The Missouri Compromise and a series of bills known as the Compromise of 1850 attempted to keep peace between the North and South. The Kansas-Nebraska Act of 1854 was also meant as a solution to the sectional problem, which rested on the idea of “popular sovereignty”—settlers in each territory would vote to decide whether slavery was allowed or not—which seemed on the face of it to support Founding principles of self-government.

An Act to Organize the Territories of Nebraska and Kansas

SEC. 14. . . . the eighth section of the act preparatory to the admission of Missouri into the Union approved March sixth, eighteen hundred and twenty, which, being inconsistent with the principle of non-intervention by Congress with slaves in the States and Territories, as recognized by the legislation of eighteen hundred and fifty, commonly called the Compromise Measures, is hereby declared inoperative and void; it being the true intent and meaning of this act not to legislate slavery into any Territory or State, nor to exclude it therefrom, but to leave the people thereof perfectly free to form and regulate their domestic institutions in their own way, subject only to the Constitution of the United States.