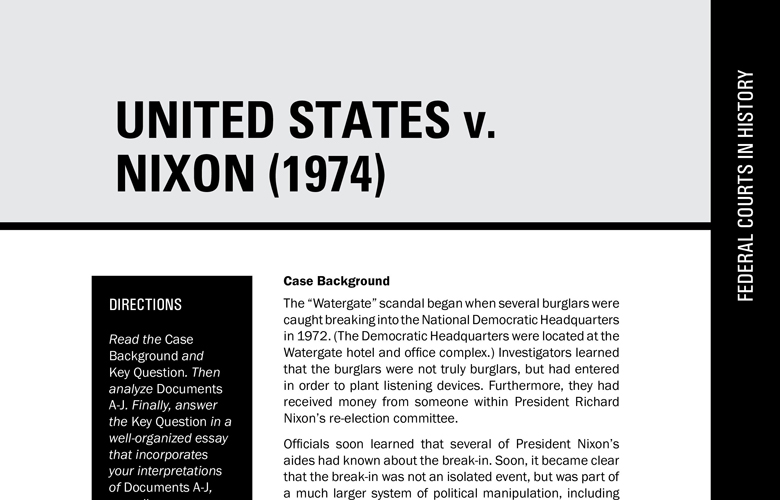 Read the Case Background and Key Question. Then analyze Documents A-J. Finally, answer the Key Question in a well-organized essay that incorporates your interpretations of Documents A-J, as well as your own knowledge of history.

The “Watergate” scandal began when several burglars were caught breaking into the National Democratic Headquarters in 1972. (The Democratic Headquarters were located at the Watergate hotel and office complex.) Investigators learned that the burglars were not truly burglars, but had entered in order to plant listening devices. Furthermore, they had received money from someone within President Richard Nixon’s re-election committee.

Officials soon learned that several of President Nixon’s aides had known about the break-in. Soon, it became clear that the break-in was not an isolated event, but was part of a much larger system of political manipulation, including an illegal campaign “slush fund.” Finally, there was a conspiracy to cover up the illegal activities. By the spring of 1973, several of President Nixon’s top aides had been charged with obstruction of justice for lying to investigators. The President was named as a co-conspirator.

A new special prosecutor was appointed, and he also subpoenaed the tapes. Once again, the President refused to comply. He did, however, release partial transcripts and tapes, but with several segments—one of them eighteen and a half minutes long—deleted. Finally, in July of 1974, the question of whether President Nixon would have to comply with the subpoena and produce the tapes went to the Supreme Court.