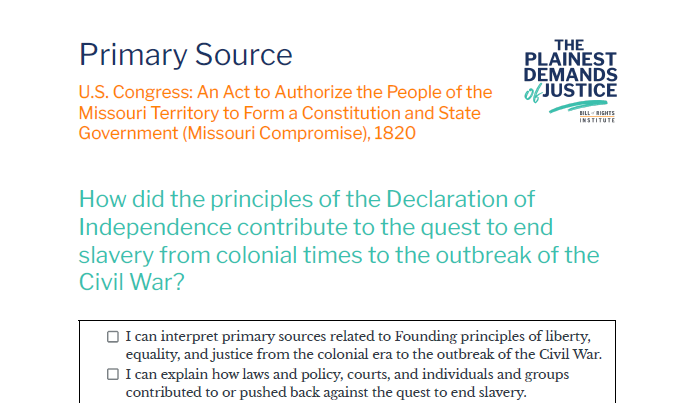 The Northwest Ordinance of 1787 set a precedent that slavery would be banned from future states added to the Union north of the Ohio River. The Southwest Ordinance of 1790, however, allowed slavery in future states south of the Ohio River. As more states petitioned to join the union in the nineteenth century, the debate surrounding the expansion of slavery intensified. Several attempts at a compromise were introduced, including the Missouri Compromise below. The 16th United States Congress passed the legislation on March 3, 1820, and President James Monroe signed it on March 6, 1820. The compromise admitted Maine as a free state and Missouri as a slave state, and it established a boundary in the Louisiana Territory dividing territories into slave and free to avoid future conflict.

SEC. 8 . . .That in all that territory ceded by France to the United States, under the name of Louisiana, which lies north of thirty-six degrees and thirty minutes north latitude, not included within the limits of the state, contemplated by this act, slavery and involuntary servitude, otherwise than in the punishment of crimes, whereof the parties shall have been duly convicted, shall be, and is hereby, forever prohibited.