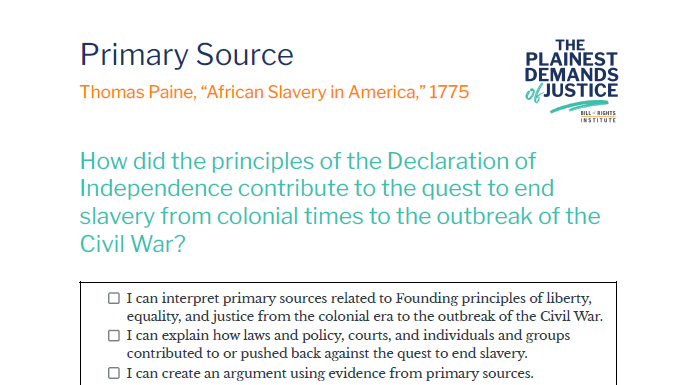 Thomas Paine, an English-American writer, emigrated to Philadelphia in 1774, when the conflict between Great Britain and the North American colonies was intensifying. Once in Philadelphia, he helped found and edit the Pennsylvania Magazine. Paine also wrote articles and poetry for the publication, including the following article, “African Slavery in America,” which he signed, “Justice and Humanity.” Paine went on to use his pen to advocate on behalf of the American and French Revolutions. He died in New York in 1809.

But the chief design of this paper is not to disprove it, which many have sufficiently done; but to entreat Americans to consider.

1. With what consistency, or decency they complain so loudly of attempts to enslave them, while they hold so many hundred thousands in slavery; and annually enslave many thousands more, without any pretense of authority, or claim upon them?

2. How just, how suitable to our crime is the punishment with which Providence [divine intervention] threatens us? We have enslaved multitudes, and shed much innocent blood in doing it; and now are threatened with the same. And while other evils are confessed, and bewailed, why not this especially, and publicly; than which no other vice, if all others, has brought so much guilt on the land?