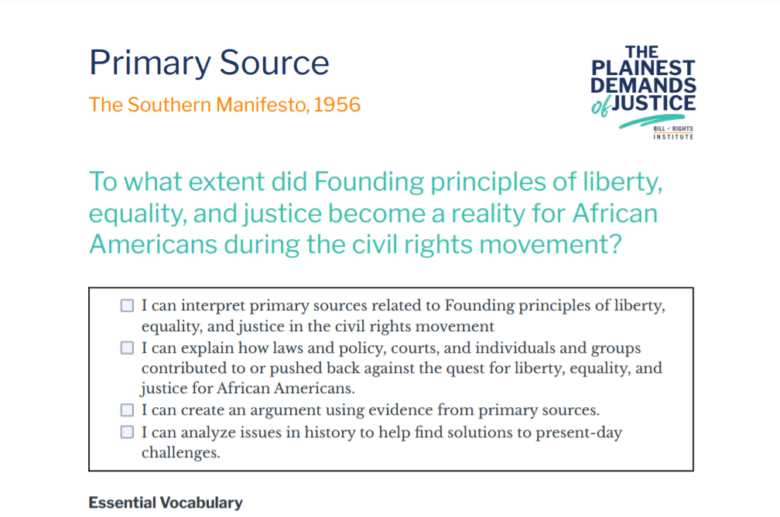 On March 12, 1956, 19 Senators and 77 members of the House of Representatives signed the “Southern Manifesto,” condemning the Supreme Court decision in Brown v. Board of Education, 1954. The resolution called the decision a clear example of judicial overreach and encouraged states to lawfully resist mandates that stemmed from the decision. In response to southern opposition, the court revisited Brown in the case of Cooper v. Aaron, 1958; however, in that case, the justices reaffirmed their decision in Brown.

We regard the decision of the Supreme Court in the school cases as clear abuse of judicial power. It climaxes a trend in the Federal judiciary undertaking to legislate, in derogation [belittling] of the authority of Congress, and to encroach upon the reserved rights of the states and the people. . . .

In the case of Plessy v. Ferguson in 1896 the Supreme Court expressly declared that under the Fourteenth Amendment no person was denied any of his rights if the states provided separate but equal public facilities. . . . Though there has been no constitutional amendment or act of Congress changing this established legal principle almost a century old, the Supreme Court of the United States, with no legal basis for such action, undertook to exercise their naked judicial power and substituted their personal political and social ideas for the established law of the land. . . .

We reaffirm our reliance on the Constitution as the fundamental law of the land. We decry [to declare wrong] the Supreme Court’s encroachments on rights reserved to the states and to the people, contrary to established law and to the Constitution. We commend the motives of those states which have declared the intention to resist forced integration by any lawful means. . .

We pledge ourselves to use all lawful means to bring about a reversal of this decision which is contrary to the Constitution and to prevent the use of force in its implementation.