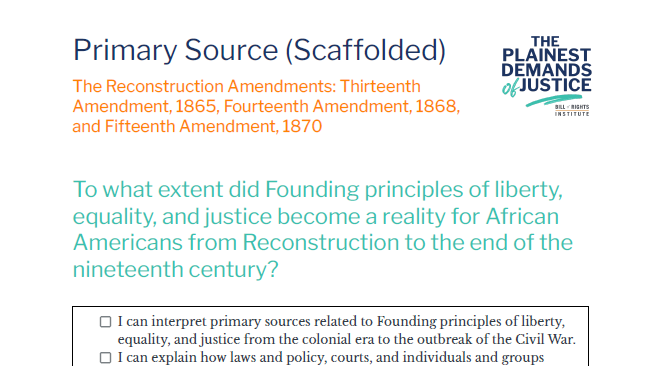 After the end of the Civil War, the United States was faced with huge challenges, including defining the status of the nearly 4 million freed African Americans. A group of Republican politicians in Congress, known as Radical Republicans, looked for permanent solutions to champion a formal end to slavery, as well as citizenship and civil rights for African Americans. Together, the Thirteenth, Fourteenth, and Fifteenth Amendments are referred to as the Reconstruction Amendments. The Fourteenth Amendment in particular has been invoked in landmark Supreme Court cases up to the present day.

Neither slavery nor involuntary servitude, except as a punishment for crime whereof the party shall have been duly convicted, shall exist within the United States, or any place subject to their jurisdiction.

Congress shall have power to enforce this article by appropriate legislation.

All persons born or naturalized [to legally become a citizen of a country] in the United States and subject to the jurisdiction thereof, are citizens of the United States and of the State wherein they reside. No State shall make or enforce any law which shall abridge [to deprive someone of something] the privileges or immunities [bans states from violating rights of a citizen] of citizens of the United States; nor shall any State deprive any person of life, liberty, or property, without due process of law [apply rules equally]; nor deny to any person within its jurisdiction the equal protection of the laws . . . .

The Congress shall have power to enforce, by appropriate legislation, the provisions of this article.