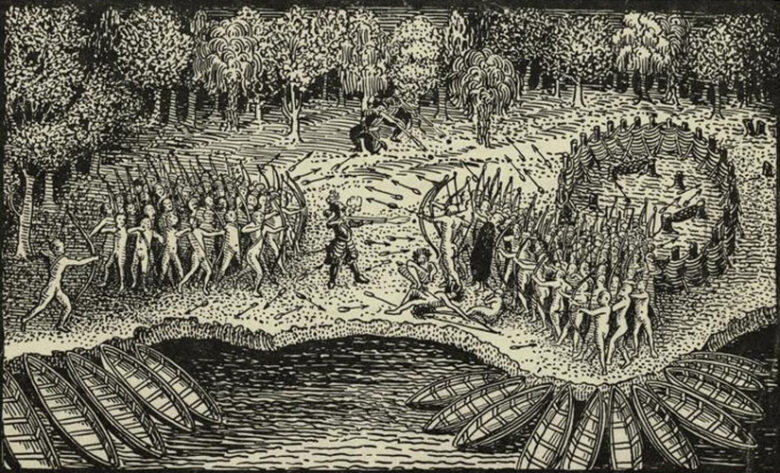 Very few written sources exist from the perspective of any North American Indians before European contact. This poses a huge challenge to scholars wishing to learn about the enormous economic, political, and cultural diversity of these groups before the arrival of Europeans. Historians are left with the archeological record, European accounts of first encounters, and Native American oral traditions. Oral traditions consist of stories handed down through generations, yet our records of these traditions were often compiled after European contact.

The Iroquois Confederacy was centered in what is today upstate New York and was one of two large chiefdoms that existed when English colonists arrived on the eastern seaboard (the other being the Powhatan Confederacy in eastern Virginia). The following source recounts the foundation of the Iroquois Confederacy, or Haudenosaunee, as the member nations refer to themselves. The confederacy is believed to date from c. 1570–1600; this version of its creation was first published in 1881 by a Tuscarora chief, Elias Johnson, in a work entitled “Legends, Traditions, and Laws of the Iroquois, or Six Nations and History of the Tuscarora Indians.”

The Oral Tradition of the Foundation of the Iroquois Confederacy: http://college.cengage.com/history/ayers_primary_sources/oral_trad_iroquois.htm

Full book in which this source appears: http://dominiopublico.mec.gov.br/download/texto/gu007978.PDF