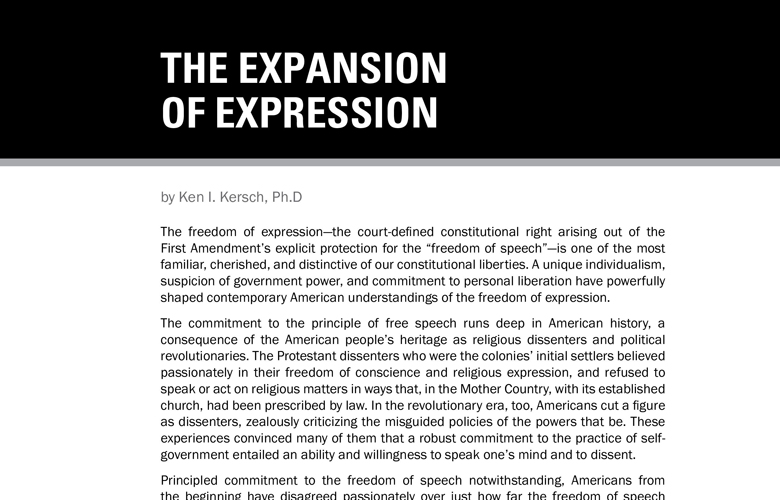 The freedom of expression—the court-defined constitutional right arising out of the First Amendment’s explicit protection for the “freedom of speech”—is one of the most familiar, cherished, and distinctive of our constitutional liberties. A unique individualism, suspicion of government power, and commitment to personal liberation have powerfully shaped contemporary American understandings of the freedom of expression.

The commitment to the principle of free speech runs deep in American history, a consequence of the American people’s heritage as religious dissenters and political revolutionaries. The Protestant dissenters who were the colonies’ initial settlers believed passionately in their freedom of conscience and religious expression, and refused to speak or act on religious matters in ways that, in the Mother Country, with its established church, had been prescribed by law. In the revolutionary era, too, Americans cut a figure as dissenters, zealously criticizing the misguided policies of the powers that be. These experiences convinced many of them that a robust commitment to the practice of self government entailed an ability and willingness to speak one’s mind and to dissent.

Principled commitment to the freedom of speech notwithstanding, Americans from the beginning have disagreed passionately over just how far the freedom of speech extended, and what utterances, in which contexts, should be considered beyond the pale. After all, Americans also believed that the right of self-government entailed the power of the people to advance the collective public good through the passage of “police powers” regulations to preserve and advance the public health, safety, and morals. They further believed, that, in most circumstances, good government entailed according due deference to properly constituted government authorities. Many late eighteenth and nineteenth  century Americans thus believed that the First Amendment preserved intact traditional English common law understandings that took into account the need for effective government. 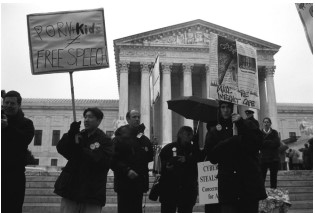 In his Commentaries on the Constitution (1833), for instance, the prominent legal scholar and Supreme Court Justice Joseph Story wrote that the very idea that the First Amendment “was intended to secure to every citizen an absolute right to speak, or write, or print, whatever he may please, without any responsibility, public or private … is a supposition to wild to be indulged by any rational man. This would be to allow every citizen a right to destroy, at his pleasure, the reputation, the peace, the property, and even the personal safety of every other citizen. …[The First Amendment is no more or less than an expression of the doctrine that] every man shall be at liberty to publish what is true, with good motives, and for justifiable ends.” Story, that is, drew a firm distinction between permissible “liberty” and impermissible “license.” Others, however, including Founder James Madison, argued that, so far as the freedom of speech was concerned, the unique American experiment in democracy warranted an alteration of the traditional common law rules. 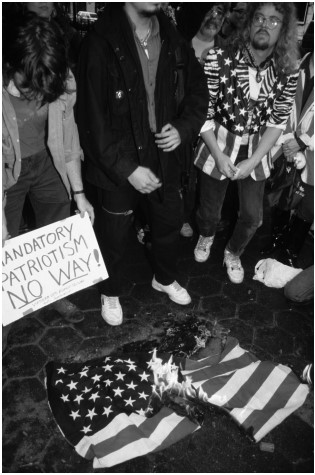 These tensions have helped produce a history ripe with intense disagreements over the rightful scope of the freedom of speech. In the eighteenth and nineteenth centuries, however, the Supreme Court was a relatively weak institution, and issued virtually no interpretations of the First Amendment, since it was settled law prior to the end of the nineteenth century that the Bill of Rights were restrictions on the power of the national government only, and not the states. Moreover, many laws that we today would consider as clearly encroaching on basic constitutional freedoms—such as laws against blasphemy and sexually indecent publications—were simply accepted without challenge as essential bulwarks of the public good. Although rarely litigated in this period, however, the First Amendment’s free speech protections did play a prominent part in public political debate. Intense disputes between opposition parties in the early republic, and between the defenders and opponents of slavery beginning in the 1830s, entailed major fights over the scope of the protection to be afforded to the freedom of expression. Free speech concerns were prominent during the Civil War as well, which sparked repeated controversies over the right of outspoken individuals to inflame passions and bring the nation’s leaders into disrepute at a moment when the nation’s very survival was at stake.

With the Union victory, and the adoption of the Civil War Amendments (particularly the Fourteenth, providing that “No state shall … deprive any person of life, liberty, or property, without due process of law”), the national government was newly understood as the primary guarantor of constitutional rights, and the Supreme Court was increasingly taken to be its leading rights-defining and rights-enforcing institution. At the same time, an array of political activists and reformers, and legal theorists, began to make the case for more liberalized understandings of free speech. When, during and in the immediate aftermath of the First World War (“The Red Scare”), the federal government cracked-down hard on anarchists, socialists, and other political radicals, along with other opponents of the war, the stage was set for the germination of modern Supreme Court doctrine concerning the freedom of expression.

The old approach to free speech questions was anchored in the Court’s deferential “bad tendency” test, which held there was no constitutional transgression if the law in question was aimed at remedying an evil which the government had a right to prevent. In a series of dissenting opinions in cases involving the prosecution of political radicals opposing U.S. entry into World War I—cases which the radicals invariably lost—Justices Louis D. Brandeis and Oliver Wendell Holmes, Jr. advanced sophisticated pleas for the more expansive protection of speech freedoms. In Schenck v. United States (1919), Holmes proposed the that Court’s traditional bad tendency test be replaced by a new “clear and present danger” test, holding “the question in every case is whether the words
used in such circumstances are of such a nature as to create a clear and present danger that they will bring about the substantive evils that Congress has a right to prevent.” In his dissent in Abrams v. United States (1919), Holmes supplemented this proposed test with a philosophical defense of free speech as a spur to the “free trade in ideas.” “The best test of truth,” he wrote there, “is the power of the thought to get itself accepted in the competition of the market.” Besides joining Holmes in these dissents, Brandeis also mounted his own defense of a broadened freedom of individuals to express their “beliefs, thoughts, emotions, and sensations.” Olmstead v. United States (1928). In a luminous concurrence in Whitney v. California (1927), he wrote that “Those who won our independence believed that the final end of the State was to make men free to develop their faculties. …They believed that freedom to think as you will and to speak as you think are means indispensable to the discovery and spread of political truth; that without free speech … discussion would be futile. …That the greatest menace to freedom is an inert people; that public … should be a fundamental principle of the American government.” The Court at this time recognized the emerging status of legal free speech protections by newly holding the First Amendment to be binding on the conduct of the states. Gitlow v. New York (1925).

As the twentieth century progressed, a succession of challenges, controversies, and cultural shifts—labor union, civil rights, and anti-Vietnam War protests; the youth rebellion of the 1960s; the sexual revolution and feminism; a late century religious resurgence; the terrorist attacks of 2001; and the rise of the New Right—repeatedly raised novel legal, philosophical, and political questions concerning the proper scope of the Constitution’s free speech protections. These questions almost always became questions of the proper constitutional doctrine to be followed by a powerful Supreme Court. In response, the modern Court has fashioned an elaborate architecture of doctrine concerning the freedom of expression.

Today’s Supreme Court protects not just “pure speech” (verbal utterances), but also “expressive conduct” (like burning a flag—see Texas v. Johnson, 1989), wearing a black armband in protest, or picketing, marching, or erotic dancing)—hence, the contemporary term “freedom of expression.” The Court ranks the degree of protection speech has according to its social value. Political, scientific, and artistic speech are considered of high value. By contrast, libel, “fighting words,” criminal speech, and obscenity (see Reno v. ACLU, 1997) are considered to be of low value, with little or no legal protections. The Court subjects restrictions on high value speech to “strict scrutiny,” permitting it to be barred only if the regulation is narrowly tailored in service of a “compelling government interest.” Nevertheless, even high value speech may be regulated in a “content neutral” way (that is, without discrimination based on its message) for purposes of reasonable general regulation, the classic case being “time, place, and manner” regulations (such as those requiring permits for protests in public roads and parks, or barring the use of loudspeakers on public streets in the middle of the night). Broader protections apply in “traditional public forums” (like public parks), and narrower standards for “public properties” like airports, where it seems reasonable to have more rules. Different, more regulation-friendly standards are applied to unique institutional environments where issues of discipline and order are of special importance, like public schools, or in the military. Of course, there is often considerable controversy about the lines between the categories, and the application of the doctrine to particular, concrete cases. 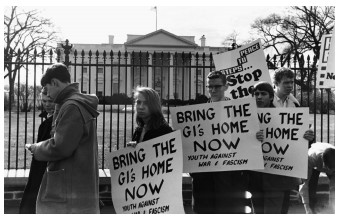 While many disputes over the freedom of expression ostensibly pit claims of individual right against broader claims to regulate to advance the public good, it is important to remember that the individual’s right to free expression is guaranteed not just to protect the individual’s autonomy  (important as that may be), but also to advance a broader public interest. The individual’s free  expression right has been defended as indispensable as the advancement of truth, to the practice of democratic self-government, and to the protection of minority voices against the potentially overwhelming powers of the majority. Ever-changing contexts perpetually raise new and fascinating free expression questions, with complex legal, philosophical, and practical dimensions. The challenge—and the high responsibility—of preserving the fundamental principle inherent in the First Amendment’s text in these altering contexts is one that has faced every generation of Americans, just as it does our own.

Dr. Ken I. Kersch is Assistant Professor of Politics at Princeton University, where he specializes in American political and constitutional development; American political thought; legal theory; and the politics of courts. Recipient of the Edward S. Corwin Prize from the American Political Science Association (2000), he has published articles in Political Science Quarterly, Studies in American Political Development, and others. He is the author of Freedom of Speech: Rights and Liberty Under the Law (ABC-Clio, 2003); Constructing Civil Liberties: Discontinuities in the Development of American Constitutional Law (Cambridge University Press, 2004), and The Supreme Court and American Political Development (with Ronald Kahn: University Press of Kansas, 2006).