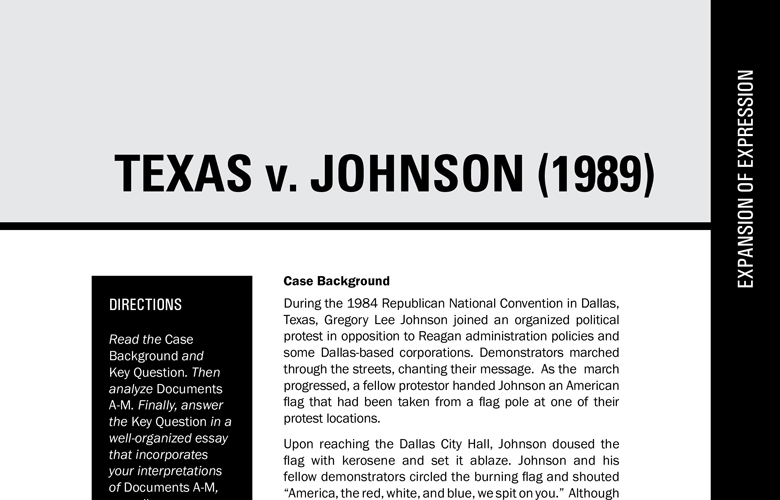 Read the Case Background and  Key Question. Then analyze Documents A-M. Finally, answer the Key Question in a well-organized essay that incorporates your interpretations of Documents A-M, as well as your own knowledge of history.

During the 1984 Republican National Convention in Dallas, Texas, Gregory Lee Johnson joined an organized political protest in opposition to Reagan administration policies and some Dallas-based corporations. Demonstrators marched through the streets, chanting their message. As the march progressed, a fellow protestor handed Johnson an American flag that had been taken from a flag pole at one of their protest locations.

Upon reaching the Dallas City Hall, Johnson doused the flag with kerosene and set it ablaze. Johnson and his fellow demonstrators circled the burning flag and shouted “America, the red, white, and blue, we spit on you.” Although no one was hurt or threatened with injury by the act, many who witnessed it were deeply offended. Johnson was arrested, charged, and convicted of violating a Texas law that made it a crime to desecrate a “venerable object.” He received a sentence of one year in prison and was ordered to pay a $2,000 fine.

Johnson appealed his conviction, arguing that the Texas flag desecration statute violated the First Amendment. The state of Texas held that it had an interest in preserving the flag as a symbol of national unity. Indeed, in previous cases, the Supreme Court had referred to the American flag as “national property.” The Court had to consider: Are there certain symbols that are so widely cherished and understood to convey certain meanings that the government can regulate their use?