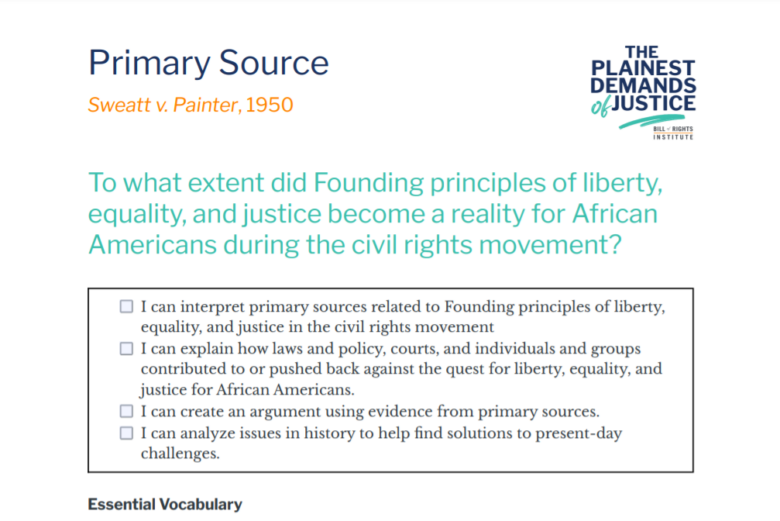 Among the Black students who applied to colleges and law schools after World War II to push against the boundaries of segregated higher education was Heman Marion Sweatt. Sweatt applied to the University of Texas Law School in 1946 and was denied admission to the main campus due to segregation. The law school offered him admission to its segregated Black law school, which had fewer faculty, an inferior library, and fewer extracurricular activities. With the help of the NAACP, Sweatt filed a lawsuit against the president of the university, Theophilus S. Painter. In its decision, the court did not directly challenge the “separate but equal” holding of Plessy v. Ferguson, 1896, but it did support the principle of greater equality in higher education opportunities under the Fourteenth Amendment’s guarantee of equal protection under the law. Sweatt, exhausted from the ordeal of the court case, eventually had to withdraw from law school, though he continued to work on campaigns to end racial discrimination until his death in 1982.

Whether the University of Texas Law School is compared with the original or the new law school for Negroes, we cannot find substantial equality in the educational opportunities offered white and Negro law students by the State. In terms of number of the faculty, variety of courses and opportunity for specialization, size of the student body, scope of the library, availability of law review and similar activities, the University of Texas Law School is superior. What is more important, the University of Texas Law School possesses to a far greater degree those qualities which are incapable of objective measurement but which make for greatness in a law school. Such qualities, to name but a few, include reputation of the faculty, experience of the administration, position and influence of the alumni, standing in the community, traditions and prestige. It is difficult to believe that one who had a free choice between these law schools would consider the question close. . . .

[P]etitioner [a party who petitioned the Supreme Court to review a case] may claim his full constitutional right: legal education equivalent to that offered by the State to students of other races. Such education is not available to him in a separate law school as offered by the State. We cannot, therefore, agree with respondents [the party being sued] that the doctrine of Plessy v. Ferguson, 163 U. S. 537 (1896), requires affirmance of the judgment below. Nor need we reach petitioner’s contention [heated disagreement] that Plessy v. Ferguson should be reexamined in the light of contemporary knowledge respecting the purposes of the Fourteenth Amendment and the effects of racial segregation . . .

We hold that the Equal Protection Clause of the Fourteenth Amendment requires that petitioner be admitted to the University of Texas Law School.