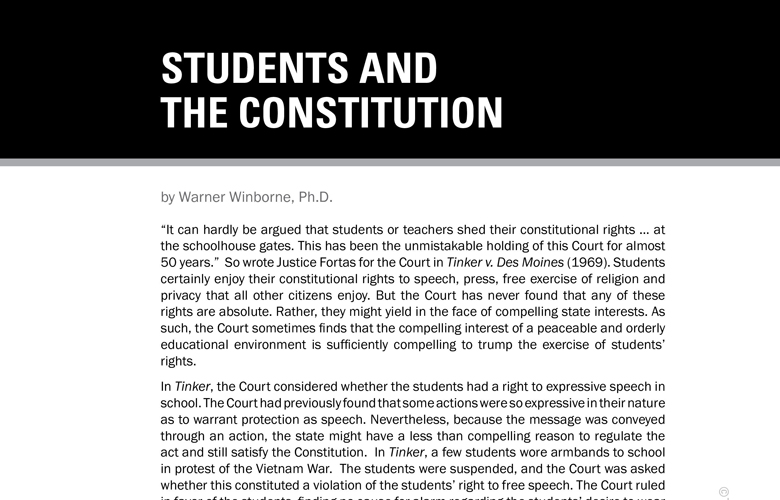 “It can hardly be argued that students or teachers shed their constitutional rights … at the  schoolhouse gates. This has been the unmistakable holding of this Court for almost 50 years.” So wrote Justice Fortas for the Court in Tinker v. Des Moines (1969). Students certainly enjoy their constitutional rights to speech, press, free exercise of religion and privacy that all other citizens enjoy. But the Court has never found that any of these rights are absolute. Rather, they might yield in the face of compelling state interests. As such, the Court sometimes finds that the compelling interest of a peaceable and orderly educational environment is sufficiently compelling to trump the exercise of students’ rights.

In Tinker, the Court considered whether the students had a right to expressive speech in school. The Court had previously found that some actions were so expressive in their nature as to warrant protection as speech. Nevertheless, because the message was conveyed through an action, the state might have a less than compelling reason to regulate the act and still satisfy the Constitution. In Tinker, a few students wore armbands to school in protest of the Vietnam War. The students were suspended, and the Court was asked whether this constituted a violation of the students’ right to free speech. The Court ruled in favor of the students, finding no cause for alarm regarding the students’ desire to wear the armbands. In the absence of any uproar or outcry, and with no disturbance resulting from the wearing of the armbands, the majority found the action to be close to “pure speech.” The dissenters either disagreed with the finding of negligible disturbance at the school, or they would give the widest latitude to the discretion of the school authorities. 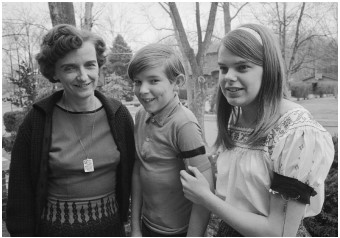 In a concurring opinion in Tinker, Justice Stewart noted that, “Although I agree with much of what is said in the Court’s opinion, and with its judgment in this case, I cannot share the Court’s uncritical assumption that, school discipline aside, the First Amendment rights of children are co-extensive with those of adults.” This question, of whether the free speech rights of students were the equal of those of adults was raised in Hazelwood v. Kuhlmeier. Here, a student newspaper, published as part of a journalism class, was to run an article on student pregnancy and another on the impact of divorce on students. Consistent with school practice, the article proofs were submitted to the school principal prior to publication. He withheld the articles, finding the first inappropriate for a young audience, and the latter unfair to those parents criticized by their children. The student authors and editors sued, claiming that the prior restraint violated their rights to free speech and press. The Court, however, found that the school had acted reasonably.

The first question before the Court was whether the free speech rights of students were the same as those of adults. The Court determined that since the student is engaged in an instructive exercise, the school may reasonably limit speech and expression to the extent that those limitations serve a pedagogical function, even if those limitations would be impermissible for adults. The second question before the Court was whether the student newspaper constituted an “open forum” for expression, in which case, free speech rights should be given the widest latitude. Newspapers are commonly considered an “open forum” for expression, and schools frequently make their grounds freely available to student groups and community groups for meetings. But in this case, the newspaper was produced as a class assignment, and intended for student consumption. The expenses of publishing the newspaper were almost entirely borne by the school. Thus the Court determined a public forum did not exist, and the students could not expect the same level of free speech that they might had this been an independent, daily newspaper.

Dissenters on the Court objected because the majority distinguished this case from Tinker. In Tinker, the Court found that only speech which “materially disrupts classwork or involves substantial disorder or invasion of the rights of others” can be censored. Yet here the majority claims that any speech inconsistent with the educational mission of the school might be restricted.

Apart from First Amendment rights, students have also found that their rights to privacy are also conditioned by their status as students. In New Jersey v. T.L.O. (1985), the Court found that a warrantless search of a student’s purse was reasonable and hence constitutional, given probable cause. That is, because the school authority had probable cause to believe that the student had violated school policy (in this case smoking in the bathroom), a search of the student’s purse
was reasonable. In Vernonia School District v. Acton (1995), the Court found that drug testing
of student-athletes was permissible given the minimal nature of the intrusion (athletes must
submit to physicals) and the determination of the existence of a drug problem in the school district in general, and among the student athletes in particular.

In Tinker, the Court found that only speech which “materially disrupts classwork or  involves substantial disorder or invasion of the rights of others” can be censored.

But in Pottowatomie v. Earls (2002) the Tecumseh, Oklahoma school district required drug-testing of all middle and high school students engaging in any competitive extracurricular activity. The  respondent in this case, Lindsay Earls, was a member of the marching band, show choir and Academic Team. There was no evidence that she used drugs, nor was there evidence that drug use was a problem in the school district. But the Court found that the state’s interest in discouraging drug use among its students was sufficiently compelling to justify the intrusion on students’ privacy. Indeed, students could avoid the invasion of privacy, the Court noted, by choosing not to participate in competitive activities. 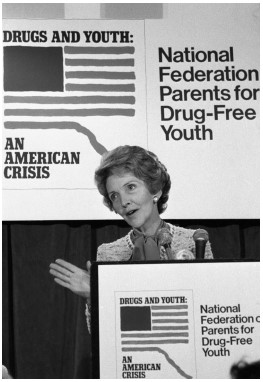 Dissenting in Earls was Justice Ruth Bader Ginsburg, who concurred with the Court opinion in Vernonia. Yet in Earls, Justice Ginsburg believes that the Court has gone too far in limiting students’ privacy rights. Searches must be reasonable, and she finds the testing of those not inclined to drug use, and absent any finding of a drug problem to be unreasonable. Further, the danger of drug use to student athletes is quite substantial, posing severe health risks associated with their sports. Yet there seem to be no equivalent health risk to those engaged in non-athletic competition such as Future Homemakers, Future Farmers, or marching band. Tongue firmly in cheek, Ginsburg writes, “Notwithstanding nightmarish images of outof-control flatware, livestock run amok, and colliding tubas disturbing the peace and quiet of Tecumseh, the great majority of students the School District seeks to test in truth are engaged in activities that are not safety sensitive to an unusual degree.” Lastly, while athletes might share a diminished sense of privacy given the nature of a locker room, there is no locker room for the Academic Team, hence a greater expectation of privacy.

As is the case in its First and Fourth Amendment jurisprudence elsewhere, in the case of students, the Court attempts to balance the exercise of these freedoms with compelling state interests. And maintaining an orderly classroom environment, or teaching a particular lesson, or preventing drug use have on occasion proven to be sufficiently compelling interests to limit students’ rights to speech, press and privacy.

Dr. Warner Winborne is Assistant Professor of Political Science at Hampden-Sydney College in Virginia, where his particular areas of interest include Aristotle, Adam Smith, and Thomas Hobbes. The Executive Director for the Center for the Study of the Constitution, he specializes in the Fourth, Ninth, and Fourteenth Amendments. He has presented papers at the Midwest Political Science Association’s annual conferences, chaired a roundtable discussion of Lani Guinier’s and Gerald Torres’ The Miner’s Canary at the American Political Science Association conference, and is the author of Modernization and Modernity: Thomas Hobbes, Adam Smith and Political Development.