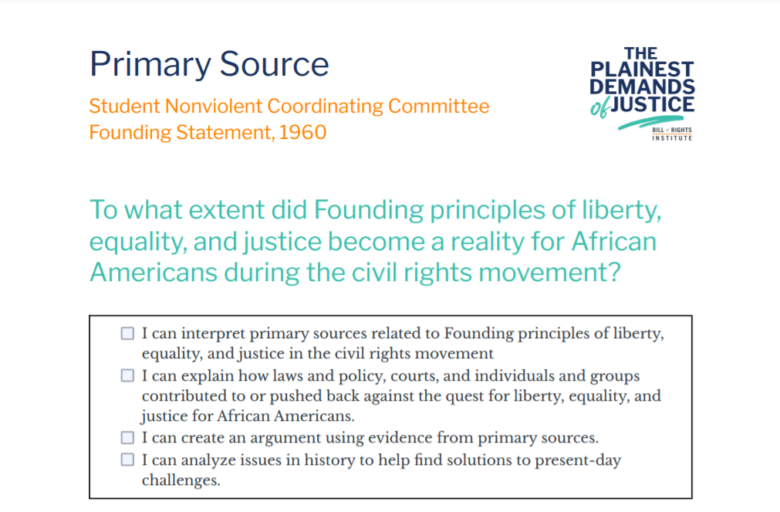 In February 1960, Black college students staged a sit-in to protest segregated Woolworth’s counters in Greensboro, North Carolina. This action spread to many other cities and became a movement of young civil rights activists. In April, Ella Baker, a civil rights movement activist, invited several young activists including John Lewis, Diane Nash, and Marion Barry to participate in a meeting at Shaw University in Raleigh, North Carolina. The group formed the Student Nonviolent Coordinating Committee (SNCC) and developed a statement of purpose. That mission statement was rooted in nonviolent activism for social justice. SNCC played a significant role in the major events of the civil rights movement, including the Freedom Rides in 1961, the Mississippi Freedom Summer in 1964, and the march from Selma to Montgomery, Alabama, in 1965.

We affirm the philosophical or religious ideal of nonviolence as the foundation of our purpose, the presupposition [assumption] of our faith, and the manner of our action. Nonviolence as it grows from the Judeo-Christian [religious writings and beliefs held in Judaism and Christianity] tradition seeks a social order of justice permeated by love.

Love is the central motif [theme] of nonviolence. Love is the force by which God binds man to himself and man to man. Such love goes to the extreme; it remains loving and forgiving even in the midst of hostility. It matches the capacity of evil to inflict suffering with an even more enduring capacity to absorb evil, all the while persisting in love.

By appealing to conscience and standing on the moral nature of human existence, nonviolence nurtures the atmosphere in which reconciliation and justice become actual possibilities.