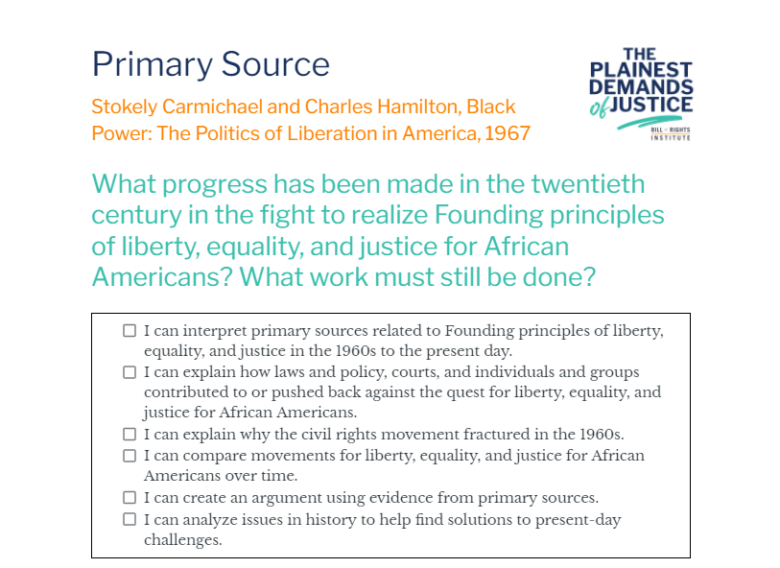 Stokely Carmichael, later known as Kwame Ture, was a prominent organizer in the civil rights movement and member of SNCC who participated in the CORE Freedom Rides, Freedom Summer, and the Selma marches. In 1966, he became chair of SNCC, taking over for John Lewis. Carmichael grew increasingly disenchanted with the nonviolent approach of Rev. Martin Luther King, Jr., and SCLC and began to call for a more militant approach to ending segregation. In 1967, he co-authored a book titled Black Power: The Politics of Liberation in America with Charles V. Hamilton, another civil rights leader. In their manifesto for Black Power, the two men rejected integration and urged a more radical, confrontational approach to civil rights.

Stokely Carmichael and Charles Hamilton, Black Power: The Politics of Liberation in America, 1967

The adoption of the concept of Black Power is one of the most legitimate and healthy developments in American politics and race relations in our time. The concept of Black Power . . . is a call for black people in this country to unite, to recognize their heritage, to build a sense of community. It is a call for black people to begin to define their own goals, to lead their own organizations and to support those organizations. It is a call to reject the racist institutions and values of this society.

The concept of Black Power rests on a fundamental premise: Before a group can enter the open society, it must first close ranks. By this we mean that group solidarity is necessary before a group can operate effectively from a bargaining position of strength in a pluralistic society. Traditionally, each new ethnic group in this society has found the route to social and political viability through the organization of its own institutions with which to represent its needs within the larger society. Studies in voting behavior specifically, and political behavior generally, have made it clear that politically the American pot has not melted. Italians vote for Rubino over O’Brien; Irish for Murphy over Goldberg, etc. This phenomenon may seem distasteful to some, but it has been and remains today a central fact of the American political system. There are other examples of ways in which groups in the society have remembered their roots and used this effectively in the political arena.