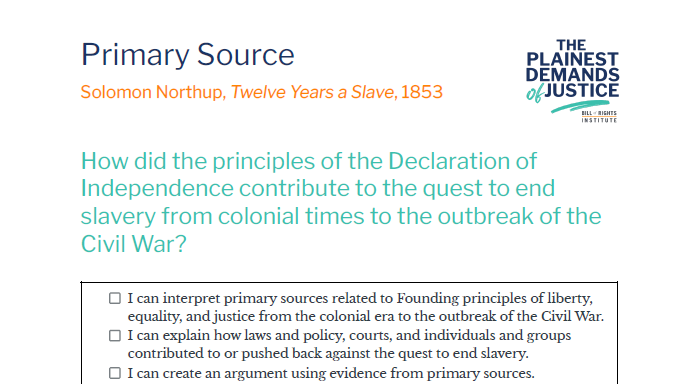 Like Frederick Douglass, Solomon Northup chronicled the story of his life in slavery. Northup was a free African American who worked as a farmer and professional musician. While traveling as a musician in Washington, DC, he was drugged, kidnapped, and sold into slavery. Northrup spent 12 years as a slave in Louisiana before he eventually escaped north with the help of a sympathetic Canadian named Samuel Bass. Northup regained his freedom, which was unusual for an individual who was kidnapped and sold into slavery. In this passage, Northup describes a heart-rending scene in a slave market in New Orleans in which a mother, Eliza, is separated from her son Randall and daughter Emily.

. . . The same man also purchased Randall. The little fellow was made to jump, and run across the floor, and perform many other feats, exhibiting his activity and condition. All the time the trade was going on, Eliza was crying aloud, and wringing her hands. She besought the man not to buy him, unless he also bought herself and Emily. She promised, in that case, to be the most faithful slave that ever lived. The man answered that he could not afford it, and then Eliza burst into a paroxysm of grief, weeping plaintively. Freeman turned round to her, savagely, with his whip in his uplifted hand, ordering her to stop her noise, or he would flog her. … Eliza shrunk before him, and tried to wipe away her tears, but it was all in vain. She wanted to be with her children, she said, the little time she had to live. All the frowns and threats of Freeman, could not wholly silence the afflicted mother. She kept on begging and beseeching them, most piteously not to separate the three. Over and over again she told them how she loved her boy…But it was of no avail; the man could not afford it. The bargain was agreed upon, and Randall must go alone. Then Eliza ran to him; passionately; kissed him again and again; told him to remember her—all the while her tears falling in the boy’s face like rain . . . “Don’t cry, mama. I will be a good boy. Don’t cry,” said Randall, looking back, as they passed out of the door. What has become of the lad, God knows. It was a mournful scene indeed. I would have cried myself if I had dared . . . .