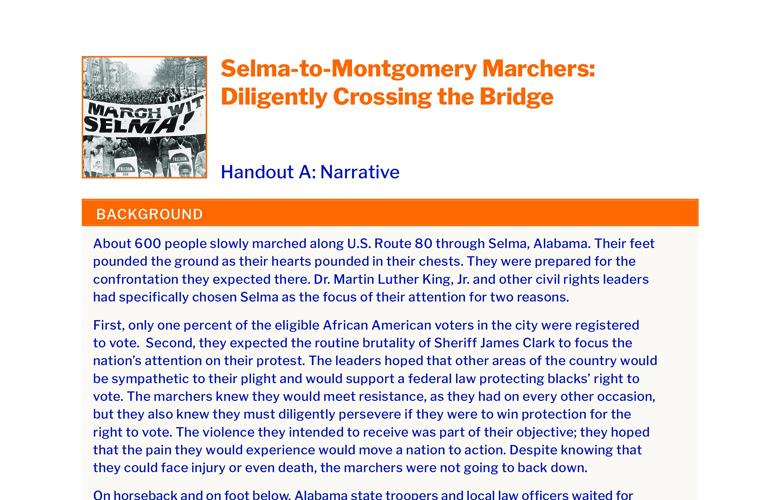 About 600 people slowly marched along U.S. Route 80 through Selma, Alabama. Their feet pounded the ground as their hearts pounded in their chests. They were prepared for the confrontation they expected there. Dr. Martin Luther King, Jr. and other civil rights leaders had specifically chosen Selma as the focus of their attention for two reasons.

First, only one percent of the eligible African American voters in the city were registered to vote. Second, they expected the routine brutality of Sheriff James Clark to focus the nation’s attention on their protest. The leaders hoped that other areas of the country would be sympathetic to their plight and would support a federal law protecting blacks’ right to vote. The marchers knew they would meet resistance, as they had on every other occasion, but they also knew they must diligently persevere if they were to win protection for the right to vote. The violence they intended to receive was part of their objective; they hoped that the pain they would experience would move a nation to action. Despite knowing that they could face injury or even death, the marchers were not going to back down.

On horseback and on foot below, Alabama state troopers and local law officers waited for the marchers on the Edmund Pettus Bridge. Brandishing their billy clubs and equipped with whips and tear gas, the officers called for the group to disperse as the marchers knelt to pray. The tear gas filled the air, the whips and billy clubs struck, the horses trampled people, and the screams rang through the Alabama air. The marchers, adhering to their commitment to nonviolent resistance, retreated from the bridge, but they knew they would return one day.

The demonstration that ended so violently on Sunday, March 7, 1965, was for a simple cause: the right to vote. Although it was illegal to do so, some southern state and city governments refused to allow African Americans to vote, either through deceptive laws or harassment. In 1965, civil rights organizations focused their efforts on Selma, Alabama. After numerous failed attempts to register black voters there, the Southern Christian Leadership Conference (SCLC) led by Martin Luther King, Jr. and the Student Nonviolent Coordinating Committee (SNCC) arranged a demonstration to protest the discrimination. They would march to Montgomery, the state capital, and petition for fair voting laws. The first attempt resulted in “Bloody Sunday,” when about seventy of the marchers required medical treatment for their injuries, and 17 of those were hospitalized. Nevertheless, the protestors were determined. They had a right to petition their government and to assemble. They would cross the bridge.

The activists persevered. The organizations planned another march for Tuesday, March 9. They knew the state would prohibit them from crossing the bridge, but their voices would be heard. On Tuesday morning, Dr. King led a group of two thousand protestors to the Edmund Pettus Bridge. Again, state troopers met them and ordered them to disperse. The marchers prayed and then left the bridge to avoid further violence.

Throughout the week, television viewers across the nation watched the news footage of state troopers violently attacking the marchers in Selma, Alabama. The conflict was no longer in a faraway town; it was right in the middle of most American living rooms. More importantly, it was in President Lyndon Johnson’s living room. The events horrified him and he immediately began a support network for the marchers. Johnson devoted much time to the issue in the days following the demonstrations.

President Johnson also fervently worked behind the scenes to encourage the passage of the Voting Rights Act of 1965. The president’s administration had attempted to pass such a bill earlier, but received little support. The events in Selma shocked the nation into action, and the bill was revived. Johnson presented it to a joint session of Congress on March 15. He stated, “What happened in Selma is part of a far larger movement which reaches into every section and state of America. It is the effort of American Negroes to secure for themselves the full blessings of American life. Their cause must be our cause too. Because it is not just Negroes, but really it is all of us, who must overcome the crippling legacy of bigotry and injustice. And we shall overcome.”

With support from the Johnson administration and coverage across the nation, civil rights leaders planned for another demonstration. They would deliver the voting rights petition to Alabama’s Governor George Wallace, a staunch opponent of civil rights legislation. This time, the organizations appealed to the federal courts for protection during the march. Alabama authorities claimed that the march would impede traffic, while the protestors emphasized that the Constitution protected their right to assemble and petition. Federal District Court Judge Frank M. Johnson, Jr. presided over the case. Despite great pressure from local officials, he ruled that the protestors’ right to assemble prevailed over the state’s concern about traffic. The march was on, this time with the protection of the federal government.

Two weeks after Bloody Sunday, more than three thousand protestors crossed the Edmund Pettus Bridge in Selma, Alabama, on their way to Montgomery—a 54-mile trip. Troops surrounded the bridge, much as they did two weeks earlier, but this time, they were there to protect the marchers. The next day, as the crisp, cold air filled their lungs and bit their noses, the marchers walked from dawn to dusk. Volunteers prepared camps along the way in which the demonstrators could sleep. On the morning of March 23, they awoke to rain and bitter cold. They tromped through mud and slept in fields. The third day offered clear skies and comfortable weather. As the group approached Montgomery, their numbers began to swell. The four hundred marchers who began that morning were accompanied by an additional four thousand at nightfall.

Five days after crossing the Edmund Pettus Bridge, between ten and twenty thousand civil rights demonstrators gathered in Alabama’s capital city. Governor Wallace watched from his window as the mass assembled on the capitol steps. The governor refused to speak to the group’s leaders unless the petitioners were from Alabama and the group was removed from the capital area. After several hours, the governor finally admitted the petitioners to the building and his assistant offered to receive the petition.

Bloody Sunday brought national attention to the plight of African Americans in the South, but the Selma-to-Montgomery march demonstrated the diligent determination of those involved in the civil rights movement. They courageously refused to be silenced, beaten down, or ignored. They resolutely assembled to deliver a petition of grievances despite brutal attacks. The activists persevered in their efforts and received the rewards.