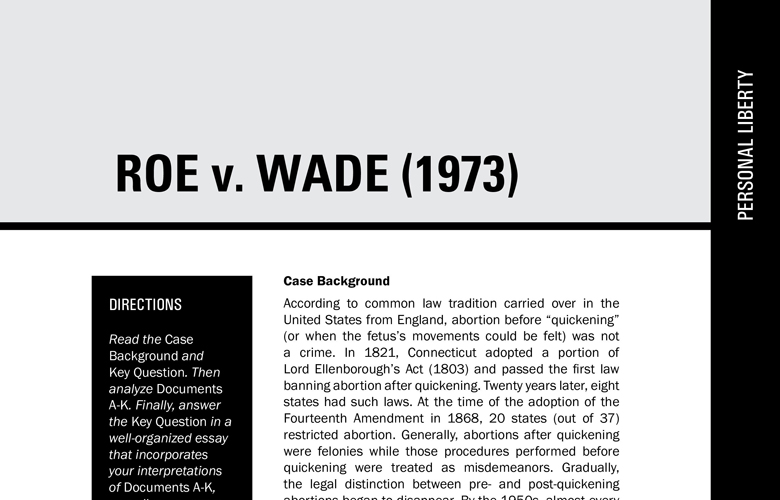 According to common law tradition carried over in the United States from England, abortion before “quickening” (or when the fetus’s movements could be felt) was not a crime. In 1821, Connecticut adopted a portion of Lord Ellenborough’s Act (1803) and passed the first law banning abortion after quickening. Twenty years later, eight states had such laws. At the time of the adoption of the Fourteenth Amendment in 1868, 20 states (out of 37) restricted abortion. Generally, abortions after quickening were felonies while those procedures performed before quickening were treated as misdemeanors. Gradually, the legal distinction between pre- and post-quickening abortions began to disappear. By the 1950s, almost every state banned all abortions except when necessary to save the woman’s life.

In the late 1960s, however, some states began to relax their laws restricting abortion. This trend  coincided with the feminist movement, and the liberalization of laws governing sexuality and privacy. The trend was also mirrored in legal challenges to laws regulating intimate relations. The Supreme Court struck down laws banning the use of birth control by married couples (Griswold v. Connecticut, 1965), and single people (Eisenstadt v. Baird, 1972).

Beginning with Colorado in 1967, thirteen states opened access to abortion. Several states restricted the procedure somewhat, while 31 states allowed abortion only to save the life of the mother. Texas was one of those states. A Texas woman, using the pseudonym Jane Roe, challenged the Texas law and her case eventually went to the Supreme Court. Roe claimed that the law robbed her of her right to privacy and her liberty as protected by the Due Process Clause of the Fourteenth Amendment.