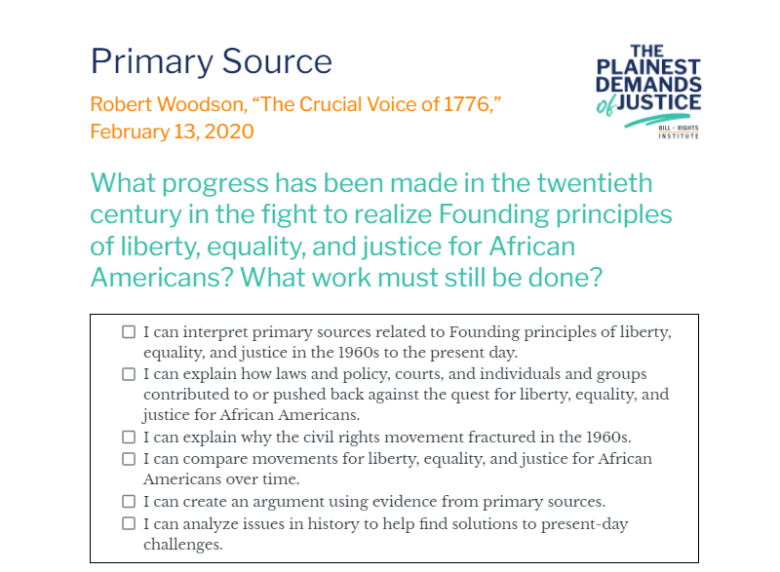 The 1619 Project sparked criticism and debate, both for its scholarship and for asserting that the enslavement of African Americans was central to the founding of the United States. The following essay by Robert Woodson, a Black civil rights activist, appeared in The Washington Examiner, directly criticizing the central premise of The 1619 Project.

[The writings of The 1619 Project] postulate that the “actual” founding of America occurred in 1619, with the arrival of the first slaves on our nation’s shores. They declare that America is essentially and irrevocably rooted in injustice and racism.

To counter the debilitating and dangerous message of The 1619 Project, we are launching “1776,” honoring the vision of our nation’s Founders who saw beyond their years. Though slavery and discrimination are undeniably a tragic part of our nation’s history, we have made great strides along its long and tortuous journey to realize its promise and abide by its founding principles. People are motivated to achieve and to overcome the challenges that confront them when they learn about inspiring victories that are possible, rather than being barraged by constant reminders of injuries they have suffered.

We are launching “1776” to counter the false history that The 1619 Project espouses and has disseminated as a school curriculum. We aim to highlight the victories that are possible in spite of oppression and to open the door to discussion of solutions to the moral disarray that afflicts not only minority, low-income neighborhoods but that also takes its toll among the sons and daughters of the affluent.