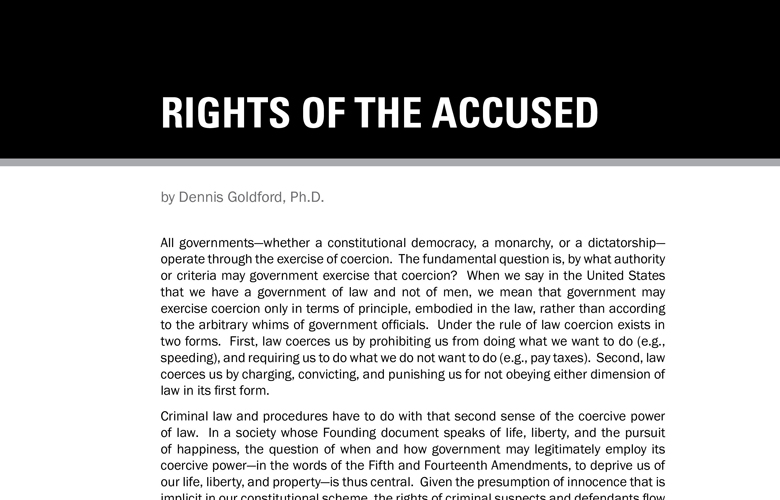 All governments—whether a constitutional democracy, a monarchy, or a dictatorship— operate through the exercise of coercion. The fundamental question is, by what authority or criteria may government exercise that coercion? When we say in the United States that we have a government of law and not of men, we mean that government may exercise coercion only in terms of principle, embodied in the law, rather than according to the arbitrary whims of government officials. Under the rule of law coercion exists in two forms. First, law coerces us by prohibiting us from doing what we want to do (e.g., speeding), and requiring us to do what we do not want to do (e.g., pay taxes). Second, law coerces us by charging, convicting, and punishing us for not obeying either dimension of law in its first form.

Criminal law and procedures have to do with that second sense of the coercive power of law. In a society whose Founding document speaks of life, liberty, and the pursuit of happiness, the question of when and how government may legitimately employ its coercive power—in the words of the Fifth and Fourteenth Amendments, to deprive us of our life, liberty, and property—is thus central. Given the presumption of innocence that is implicit in our constitutional scheme, the rights of criminal suspects and defendants flow from and give effect to that presumption and the rule of law itself. For that reason, it is appropriate the think of these protections not as criminal rights, but rather as the rights of criminal suspects and defendants. Under our system of government people charged with criminal activity are not criminals in the eyes of the law until after they confess or are convicted in a trial. In simplest terms, we can say that the criminal-justice process consists of three stages: first, when police suspect someone of criminal activity, he is a criminal suspect; second, when police amass sufficient evidence for a prosecutor to charge someone with a crime, he is a criminal defendant; and third, once someone has confessed or has been found guilty in a trial, he is a criminal. Broadly conceived, the Fourth Amendment covers the criminal suspect, the Fifth, Sixth, and Seventh Amendments cover the criminal defendant; and the Eighth Amendment (aside from bail) covers the criminal’s punishment.

Some people argue that the rights of the accused are mere technicalities, but one could argue that it is those very “technicalities” that distinguish a constitutional democracy from an authoritarian, tyrannical, or totalitarian political system.

Some people argue that the rights of the accused are mere technicalities, but one could argue that it is those very “technicalities”—especially the protection against unreasonable searches and seizures in the Fourth Amendment, at issue in Mapp v. Ohio (1961), the privilege against self-incrimination (as well as the guarantee of due process) in the Fifth Amendment, at issue in Miranda v. Arizona (1966), and the right to counsel in the Sixth Amendment, at issue in Gideon v. Wainwright (1963)—that distinguish a constitutional democracy from an authoritarian, tyrannical, or totalitarian political system. You may be familiar with a phrase out of the old American West: “Give him a fair trial and then hang him.” Sometimes used today as well, this phrase suggests that we know someone’s guilt prior to a trial, but under the law it is only through an elaborate set of procedures that we are authorized to determine one’s guilt or innocence. Under the presumption of innocence, the rights of the accused are the foundation of those procedures.

Understanding the rights of the accused requires us to consider four central issues. The first one is what we can call the interpretive question: what is the meaning of a particular right or procedural guarantee? For example, what is a search, what is a seizure, and what is the difference between a reasonable and unreasonable search and seizure? Is the government engaged in a reasonable search when it wiretaps telephone conversations (Katz v. United States, 1967), or when it points a thermal-imaging device at someone’s home to determine whether he is generating enough heat inside to indicate that he is using heat lamps to grow marijuana (Kyllo v. United States, 2001)?

If police officers see a suspect swallow a substance during a drug bust and they take him to hospital to have his stomach pumped to obtain that substance as possible evidence of a crime, is that a reasonable search and seizure or a violation of the privilege against self-incrimination (Rochin v. California, 1952)? How much time must pass before one is deprived of the right to a speedy trial? Does allowing a child to testify behind a screen against an alleged child molester deny the defendant his right to confront the witnesses against him? These and other interpretive questions arise constantly when criminal suspects and defendants assert their constitutional rights

Additionally, in answering the interpretive question we have to ask whether the meaning of a particular right or procedural guarantee can change over time. When we ask what “cruel and unusual punishment” is, for example, do we ask what those who wrote and ratified that prohibition in 1791 meant by it, or what we might consider it to mean today? Posing a hypothetical situation in which “some state should enact a new law providing public lashing, or branding of the right hand, as punishment for certain criminal offenses,” Justice Antonin Scalia, who as an originalist takes the former position, has written, “Even if it could be demonstrated unequivocally that these were not cruel and unusual measures in 1791 … I doubt whether any federal judge—even among the many who consider themselves originalists— would sustain them against an eighth amendment challenge” (“Originalism: The Lesser Evil,” 57 University of Cincinnati Law Review 849, 861 [1989]). Relatedly, how do the criminal procedure guarantees ratified in 1791 apply to technological innovations unknown at the time, such as telephones, computers, automobiles, and airplanes?

How do the criminal procedure guarantees ratified in 1791 apply to technological innovations unknown at the time, such as telephones, computers, automobiles, and airplanes?

The second central issue is what we can call the federalism issue: to what extent are federal criminal procedure guarantees applicable against the states? In other words, to what extent are states, where we find the vast bulk of criminal law, free to deal with criminal justice matters as they see fit, and to what extent are they bound by a federally mandated floor of criminal procedures? For example, the exclusionary rule at issue in Mapp v. Ohio requires that evidence obtained by the government in violation of the rights of the accused be excluded from use by the prosecution at trial. The Supreme Court first announced this rule as binding on the federal government in Weeks v. United States (1914). The Court held in Wolf v. Colorado (1949) that it was binding only on the federal government, and not the states. Do all rights of the accused in federal proceedings apply against the states, or only some of them—and how do we determine which do and which do not?

The exclusionary rule exemplifies the third central issue in understanding the rights of the accused: what is the constitutional status of rules the Supreme Court fashions to give meaning and effect to the procedural rights and guarantees stated explicitly in the Fourth through Eighth Amendments? It is one thing to state that criminal suspects and defendants are protected against unreasonable searches and seizures, have a right to counsel and due process, a protection against self-incrimination and cruel and unusual punishment, and so forth, but how are such rights and guarantees to be enforced?

Justice Benjamin Cardozo complained that the meaning of the exclusionary rule is that “the criminal is to go free because the constable has blundered” (People v. Defore, 1926). Standard arguments against such rules are, first, that they are not constitutional provisions; second, that they handicap the police, making investigation of crimes more difficult; and, third, that they let guilty people go. Standard arguments in favor of such rules are, first, that they are rules fashioned by the courts to give meaning, content, and effect to explicitly stated constitutional protections, protections that would not exist in any meaningful way otherwise. Second, that far from handicapping police, requiring adherence to the Miranda warning and the exclusionary rule actually makes the police more careful and thus more likely to sustain a case and secure a conviction. Third, that there is evidence that relatively few convictions are ever overturned on these “technical” grounds.

Finally, understanding the rights of the accused raises a fourth central issue, one with particular salience in our post-9/11 world: to what extent, if any, do those rights—especially the prohibition on unreasonable searches and seizures and the privilege against selfincrimination—apply, for example, in the case of suspected terrorists who may have knowledge of a conspiracy to detonate a nuclear explosion in an American city? Even in a constitutional democracy dedicated to liberty, the rule of law, and the presumption of innocence, we have to remember that the central function of government is to provide for the national defense and the maintenance of law and order. There is always a tension between liberty and security: too much concern for liberty can threaten our personal and national security, and too much concern for our personal and national security can threaten our liberty. How do we strike the proper balance between liberty and security in ordinary cases of domestic criminal activity, and how do we do so in extraordinary cases of domestic and international terrorism? As you read the following materials on the rights of the accused, consider how you would balance your liberty against your need for protection against both criminals and terrorists.

Dr. Dennis Goldford is Professor of Politics and International Relations at Drake University in Iowa. He teaches in the areas of political theory and constitutional law, and his recent research deals with the originalism debate in contemporary constitutional theory. He has published numerous articles in the areas of political theory and constitutional interpretation, and his recent book is entitled The American Constitution and the Debate Over Originalism (Cambridge, 2005). His current research deals with politics and religion, and with the theory of federalism. Professor Goldford is also a frequent commentator on Iowa and national politics through both local and national media outlets.