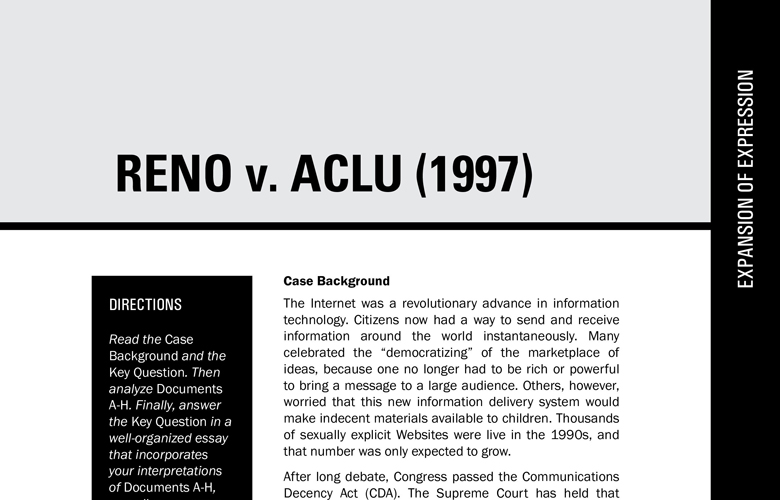 The Internet was a revolutionary advance in information technology. Citizens now had a way to send and receive information around the world instantaneously. Many celebrated the “democratizing” of the marketplace of ideas, because one no longer had to be rich or powerful to bring a message to a large audience. Others, however, worried that this new information delivery system would make indecent materials available to children. Thousands of sexually explicit Websites were live in the 1990s, and that number was only expected to grow.

After long debate, Congress passed the Communications Decency Act (CDA). The Supreme Court has held that state governments could ban obscene speech (Miller v. California, 1973), but the scope of the CDA, a federal law, was not limited to obscenity. Two provisions of this law were challenged: one criminalized “obscene or indecent” speech transmitted to children, and the other provision criminalized the delivery of “patently offensive” information to children.

The law was immediately challenged on First Amendment grounds. A three-judge District Court blocked enforcement of the law in February of 1996, and the case went to the Supreme Court. The government argued the law was needed because “the Internet threatens to give every child with access to a connected computer a free pass into the equivalent of every adult bookstore and video store in the country.” The twenty petitioners, led by the American Civil Liberties Union (ACLU), asserted that because there was no practical way to verify peoples’ ages over the Internet, the law infringed on the First Amendment rights of adults.