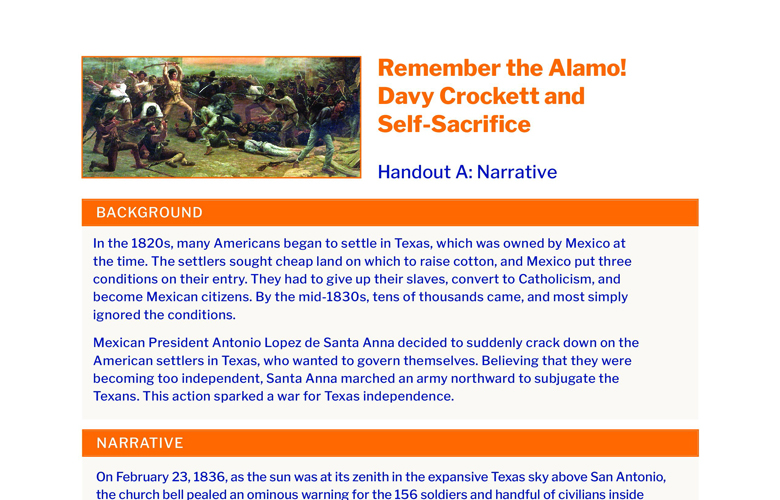 In the 1820s, many Americans began to settle in Texas, which was owned by Mexico at the time. The settlers sought cheap land on which to raise cotton, and Mexico put three conditions on their entry. They had to give up their slaves, convert to Catholicism, and become Mexican citizens. By the mid-1830s, tens of thousands came, and most simply ignored the conditions.

Mexican President Antonio Lopez de Santa Anna decided to suddenly crack down on the American settlers in Texas, who wanted to govern themselves. Believing that they were becoming too independent, Santa Anna marched an army northward to subjugate the Texans. This action sparked a war for Texas independence.

On February 23, 1836, as the sun was at its zenith in the expansive Texas sky above San Antonio, the church bell pealed an ominous warning for the 156 soldiers and handful of civilians inside the former Spanish mission called the Alamo. “The enemy is in view!” announced one of the sentries on the walls. The soldiers immediately manned their stations and looked out to try to discern a few of the camouflaged advance guard of the army of Mexican President Santa Anna. Meanwhile, the garrison commander, William Travis, wrote out a message pleading for nearby forts to send reinforcements. “We have 150 men and are determined to defend the Alamo to the last,” he wrote. They planned “never to retreat” and underlined those words several times. After rejecting Santa Anna’s offer of unconditional surrender in the mid-afternoon, Travis gathered his men together and addressed them. He promised to resist to the end, and his men gave a loud cheer agreeing.

The following morning dawned clear, but the temperatures hovered around the freezing mark. Now, the defenders could discern what appeared to be thousands of enemy troops who had the Alamo completely surrounded. Travis dispatched another rider with a call for reinforcements to all of Texas. “I call on you in the name of Liberty, of patriotism & everything dear to the American character, to come to our aid, with all dispatch…Victory or Death.” The men in the fortress had heard the same thing when frontiersman Davy Crockett had recently arrived around February 8 with some Tennessee riflemen and addressed the troops. “I have come to aid you all I can in your noble cause. I shall identify myself with your interests, and all the honor that I desire is defending as a high private, in common with my fellow citizens, the liberties of our common country,” he stated. Crockett and his sharpshooters courageously took up positions at the palisade defending the main gate. They were ready to sacrifice their lives for the others in the fort.

On the morning of February 25, the Mexican army brought up all of its cannon within range of the fort and started blasting away. The Mexicans also sent out a large detachment of 300 men to assault the fort and probe its defenses. The detachment was driven off in a hail of fire that killed several men while the rest fell back. Over the next several days, the Mexican sappers dug lines closer and closer to the besieged fort to prepare for an eventual final assault. The Texans could do little but return artillery fire sporadically to conserve ammunition and use their rifles to pick off any of the enemy that strayed too close. They built fires and huddled under blankets to ward off the chilly night air. Most slept at their posts as there were too few defenders to guard the fort in shifts. A monotonous diet of dried meat and hardtack biscuits became tiresome. Worst of all, the expected reinforcements of men had yet to appear. Feelings of impending doom arose, dampening their courage and morale.

Crockett did what he could to boost everyone’s spirits. He found a fiddle and played several tunes on it despite the nearly constant artillery bombardment. He even had a contest with another musician. Crockett went around to the soldiers and civilians and spoke with them to relieve their fears. On March 1, the defenders’ spirits were further lifted when a small reinforcement of 32 men arrived in the darkness after midnight, increasing the garrison to about 200.

Emboldened by the new men and having witnessed too many fortresses burned during sieges with their inhabitants inside, Crockett wanted to fight. He suggested that the garrison ride out and meet the enemy. “I think we had better march out and die in the open air,” he suggested to Travis. “I don’t like to be hemmed up.” Rather than await death at the initiative of the enemy, he wanted to meet it head-on valiantly. Nevertheless, Travis did not follow his advice, and they waited tensely.

On the evening of March 5, with the Mexican lines only about 100 yards away and an imminent attack certain, Travis called together all of his men. After an inspiring speech, he drew out his sword from its scabbard and traced a line in the dirt. He challenged all of his men to demonstrate their courage and willingness to stand and fight by stepping over the line. Davy Crockett and his men were among the first to do so. Jim Bowie was on a sickbed and had his men carry him across the line. Only one man refused to do so and was allowed to slink through enemy lines in the darkness to leave.

The following day, before the first light of dawn emerged on the horizon, a bugle call pierced through the darkness from outside the walls. On the twelfth day of the siege, the exhausted defenders awoke in fright as they grabbed their rifles and prepared the cannon. Travis was roused and ran up to the north wall, which was significantly battered the previous day and crumbling. He shouted, “Come on, boys, the Mexicans are upon us, and we’ll give them hell!”

The enemy approached in four distinct columns. The fortress guns blasted into their lines with cannonball and canisters of lead balls, killing scores at a time. Still, the enemy came and rushed
right up to the wall where defenders with rifles and shotguns shot at them. Commander Travis was shooting at the Mexicans when he was killed atop the wall. Crockett and his riflemen successfully defended the palisade, where they shot so many of the enemy that they cleared a path around the gate. When shouts for help were heard from the compromised north wall and west wall, they jumped up and ran in those directions. With the Mexicans pouring into the Alamo by means of scaling ladders and holes in the wall, Crockett kept firing and reloading as fast as possible.

The scene inside the fortress was complete anarchy. Acrid smoke filled the air and obscured vision. The defenders turned the artillery guns inward and blasted away at groups of Mexicans. They shot rifles from behind piles of sandbags, from windows, and behind walls. The fighting descended into hand-to-hand combat and bayonet thrusts. Men made isolated stands but were soon all overwhelmed. The Texans at the Alamo made a final last stand inside the church but were all killed.

Crockett fought courageously at the west wall. At one point, he was shot in the chest and kept firing despite his wounds. He is reputed to have been among the last of five prisoners brought to Santa Anna, who unhesitatingly called for their immediate execution. A Mexican officer said Crockett died “without complaining and without humiliating [himself] before [his] torturers. While they all lost their lives, the Alamo defenders killed several hundred enemies despite being outnumbered more than ten to one. Davy Crockett and all of the Alamo’s defenders sacrificed themselves to preserve the independence of Texas and appealed to the American ideals of liberty and self-government.