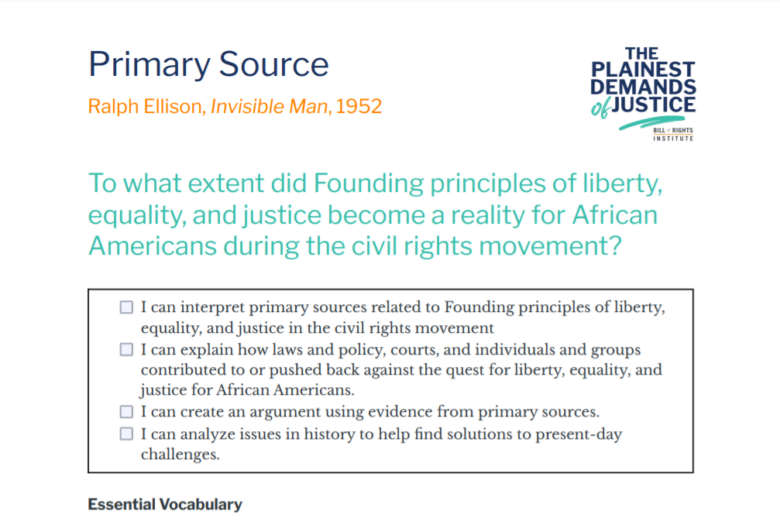 Ralph Ellison was a Black novelist and essayist whose novel Invisible Man was published in 1952 and won a National Book Award the following year. The unnamed narrator is a young Black man seeking recognition of his personhood as an individual. He navigates relationships with people of different races in experiences that take him from a traditionally Black college in the South to the streets of Harlem. Throughout the novel, he grapples with the dying words of his grandfather: “Son, after I’m gone I want you to keep up the good fight. I never told you, but our life is a war and I have been a traitor all my born days, a spy in the enemy’s country ever since I give up my gun back in the Reconstruction. Live with your head in the lion’s mouth. I want you to overcome ’em with yeses, undermine ’em with grins, agree ’em to death and destruction, let ’em swoller you till they vomit or bust wide open. . .Learn it to the younguns.” In the following passage, the protagonist struggles with his grandfather’s words.

I am an invisible man. . . . I am a man of substance, of flesh and bone, fiber and liquids—and I might even be said to possess a mind. I am invisible, understand, simply because people refuse to see me . . . it is as though I have been surrounded by mirrors of hard, distorting glass. . . . The invisibility to which I refer occurs because of a peculiar disposition of the eyes of those with whom I come in contact. . . .

Did he [his grandfather] mean to affirm the principle, which they themselves had dreamed into being out of the chaos and darkness of the feudal past, and which they had violated and compromised to the point of absurdity even in their own corrupt minds? Or did he mean that we had to take the responsibility for all of it, for the men as well as the principle, because we were the heirs who must use the principle because no other fitted our needs? Not for the power or for vindication [justification], but because we, with the given circumstance of our origin, could only thus find transcendence [rising above the ordinary]? Was it that we of all, we, most of all, had to affirm the principle, the plan in whose name we had been brutalized and sacrificed—not because we would always be weak nor because we were afraid or opportunistic, but because we were older than they, in the sense of what it took to live in the world with others and because they had exhausted in us, some—not much, but some—of the human greed and smallness, yes, and the fear and superstition that had kept them running. . . . Or was it, did he mean that we should affirm the principle because we, through no fault of our own, were linked to all the others in the loud, clamoring semi-visible world, that world seen only as a fertile field for exploitation . . . and . . . condescension . . . ?

The fact is that you carry part of your sickness with you, at least I do as an invisible man. . . . America is woven of many strands; I would recognize them and let it so remain. It’s ‘winner take nothing’ that is the great truth of our country or of any country. Life is to be lived, not controlled; and humanity is won by continuing to play in face of certain defeat. Our fate is to become one, and yet many. . . . So it is that now I denounce and defend, or feel prepared to defend. I condemn and affirm, say no and say yes, say yes and say no. I denounce because though implicated and partially responsible, I have been hurt to the point of abysmal point, hurt to the point of invisibility. And I defend because in spite of all I find that I love. . . . there’s a possibility that even an invisible man has a socially responsible role to play.