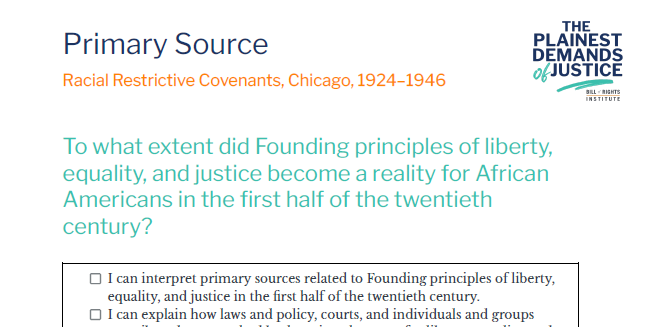 During World War I, the constitutionality of city ordinances regulating where Blacks and whites lived was challenged in the Supreme Court in Buchanan v. Warley (1917). In a unanimous decision, the court found that racial zoning ordinances violated the Fourteenth Amendment’s equal protection clause. The ruling meant that cities could not issue racial zoning ordinances, but it left the possibility of private discrimination open. In private deeds and developer maps, racial restrictive covenants, or legal agreements that prohibit the purchase, lease, or occupation of a piece of property by a particular group, became a common practice to limit where African Americans could buy homes. The following examples of racial restrictive covenants come from neighborhoods in Chicago.

1924: “That no part of said lots or premises shall be conveyed or leased by the owners thereof, or any subsequent grantee or the successors in title to any person or persons nor shall any improvements erected thereon be used or occupied by any person, not of the Caucasian Race.”
(Source: Plat #8452607, Platbook 192, Page 20. Recorded: June 5, 1924. Expired: January 1, 1980)