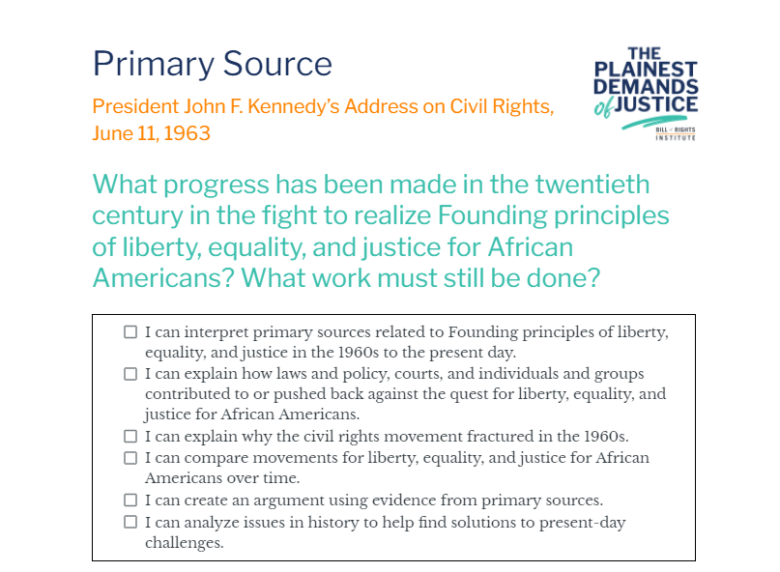 On June 10, 1963, President Kennedy federalized the Alabama National Guard to protect two Black students—Vivian Malone and James A. Hood—as they enrolled in the University of Alabama. The following day, Alabama’s Governor George Wallace gave in to federal pressure and stood down to allow Malone and Hood to enroll, and the president addressed the nation.

. . . This is not a sectional issue . . . Nor is this a partisan issue . . . This is not even a legal or legislative issue alone. It is better to settle these matters in the courts than on the streets, and new laws are needed at every level, but law alone cannot make men see right.

We are confronted primarily with a moral issue. It is as old as the scriptures and is as clear as the American Constitution.

The heart of the question is—whether all Americans are to be afforded equal rights and equal opportunities. Whether we are going to treat our fellow Americans as we want to be treated. If an American, because his skin is dark, cannot eat lunch in a restaurant open to the public, if he cannot send his children to the best public school available, if he cannot vote for the public officials who represent him, if, in short, he cannot enjoy the full and free life which all of us want, then who among us would be content to have the color of his skin changed and stand in his place? Who among us would then be content with the counsels [advice] of patience and delay?